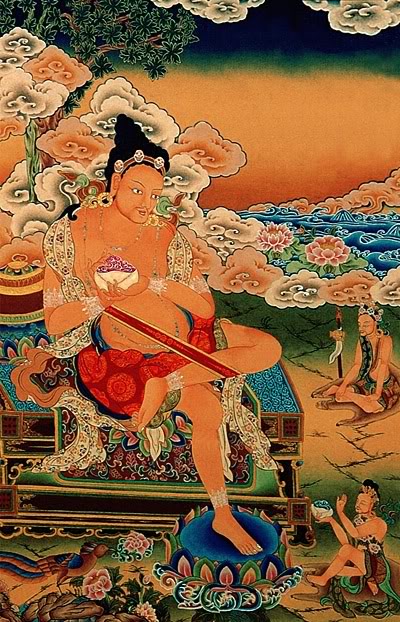 Homage to the Vajra Dakini!

Mahamudra is beyond all words and concepts.
But for your sake, O Naropa, my most devoted disciple,
who is diligent in ascetic practice and exertion,
this shall be said:

Space lacks any locality at all.
Likewise, Mahamudra rests on naught.
Thus, without making effort, abide in the pure primordial state,
and the fetters that bind you will simply drop away.

Just as when looking into the open sky,
fixed concepts of centre and circumference dissolve,
So, if with mind one perceives the mind, mental activity ceases; then is it, that Enlightened-mind is realized.

Clouds that arise and take form in the sky,
pass away quite automatically according to natural law.
Likewise, the flow of concepts arising in the mind,
naturally pass away when mind perceives mind.

Space has neither shape nor colour;
it is changeless, and not tinged by either white or black.
Likewise, mind-in-itself has neither form nor colour,
nor can it be stained by virtue or vice.

The burning stellar radiance of the sun
can not be covered by the eternal darkness of space.
Likewise the luminous essence of mind
can not be shrouded by Samsara’s endless duration.

Though we say that space is empty,
the actual nature of this vacuity defies description.
Though we say that mind is Clear Light,
it is actually beyond all words and concepts.
In that mind is like space, it encompasses all.
Therefore cease with bodily movement and sit relaxed;
close your mouth and simply remain in silence;
empty your mind and leap beyond the phenomenal!

Let the body rest at ease, insubstantial like a hollow bamboo.
Let the mind rest in itself, spacious and un-preoccupied with thought.
When the mind is not possessed by aims, that is Mahamudra.
When this is realized, that is Great Enlightenment!

Adherents of shamanic ritual and of the Mahayana,
of the Vinaya and Sutra, and the followers of the Religions,
with all their various scholastic theologies and devotions,
have no idea how marvelous is the innate Mahamudra.
For them, the light is hidden by the very act of seeking to know it.

As to the keeping of covenant-vows (samaya), they are broken
by the very act of trying to adhere to them.
Cease with rules and ritual, abandon volition, stray not from the Ultimate, and then a true Precept-keeper will you be, a lamp illuminating the darkness.
Not caught up in perceptions, nor caught in desire,
seeking nothing, abiding in the self alone, one simply lets
consciousness be, like a wave in the Great Ocean.

If you slip not into conation, if you hold to neither this nor that,
the real meaning behind all the Scriptures, will make itself clear.
Just abiding, one is released from the prison of Samsara.
Just abiding, all one’s karmic impurities are burned away.
It is then that you shall be known as a “Lamp of the Teaching”.

Even the ignorant who understand not Mahamudra,
and fools who are lost for a time in Samsara,
can be saved if they but rely on a holy Lord (guru).
Through grace (adhisthana) they may be sure of deliverance.

Know all the phenomena of Samsara as worthless;
just the cause of attachment and aversion.
All created phenomena are without real substance,
therefore seek instead the nature of the Ultimate.

Once you let go of all objects-of-perception,
the true nature of the mind shines forth.
Not trying to meditate is the supreme path of the Buddha.
By the meditation of non-meditation Enlightenment is won.

Alas! Impermanent is this world.
It is like a mirage or a dream.
Even the illusion of its existence
is not something that exists.

Therefore, abandon worldly pre-occupations, caste and position,
and meditate alone in forest, mountains and solitary places.
Abide without seeking; loosely remaining in the natural state.
By attaining non-attainment, quickly shalt thou reach the state of Mahamudra.

If you sever the main root of a living tree,
then all the many branches wither and die at once.
Cut through (kathinaccheda) the very root of consciousness,
and all mental projections will immediately cease.

The darkness of long ages is dispelled
instantly by the lighting of a single lamp.
One moment’s experience of the mind of Clear Light
immediately rends the veil of ignorance for ever.

Let the polluted pool of mental activity clear itself.
Merely watch the flow, just as it is.
Do not engage with appearances as they arise,
for Mahamudra is beyond acceptance and rejection.

Since the fundamental ground (alaya) is unborn,
it can neither be obscured nor defiled.
Just rest in the unborn state, neither meditating nor not-meditating, letting appearances resolve back into Ultimate Reality (dharmata).

At first the yogi feels his mind to be turbulent,
like the upper course of a rushing mountain torrent.
Then it becomes smooth like the broad river Ganges.
In the end it is like entering the ocean, a child returning to the mother.

One who wishes to attain this level of meditation
should first begin by practicing remembrance of the breath.
Through control of the gaze and such exercises,
the mind will be disciplined until it abides in its own state.

Now concerning the practice of Karmamudra,
the union of Wisdom (prajna) and Means (upaya):
draw down and blend, then raise it up to the source.
Finally cause it to saturate the entire body.
If this is performed free of lust, then Bliss-Emptiness is attained.

Glowing inwardly, blessed with renewed vigour and vitality,
thy life-power shall expand like the waxing moon.
Radiant and healthy, with the composure of a lion,
thou shalt attain Accomplishment (siddhi), both mundane and supreme.

By virtue of entering this practice, may all obstacles to the realization of Mahamudra dissolve away.
May the Clear Light of Mahamudra dawn in the minds of the practitioners.
May this Pith Instruction on Mahamudra come to abide in the hearts of those disciples fortunate to connect with it.

This pith-instruction on Mahamudra in 28 Verses was given by Sri Tilopa to Mahapandita Nadapada on the banks of the Ganges River. It was translated into Tibetan from the Sanskrit by Marpa Cho-kyi-lodro, and is now presented in English by the Dharma Fellowship. The origial text may be found in the Do.ha. mdzod. brgyad. ces.bya.ba. phyag. rgya. chen. po’i. man.ngag. gsal.bar. ston.pa’i. gzhung., printed at the Rumtek monastery of His Holiness the Gyalwa Karmapa, in Sikkhim.