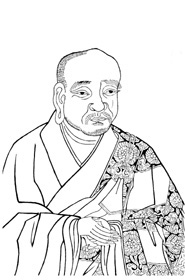 Ashvagosha: Be diligent in all your actions, (alert and) mindful never to forget (your word of honour).

1. Bowing in the proper way to the lotus feet of my Guru, who is the cause for me to attain the state of a glorious Vajrasattva, I shall condense and explain in brief what has been said in many stainless tantric texts about Guru-devotion. (Therefore) listen with respect.2. All the Buddhas of the past, present and future, residing in every land in the ten directions, have paid homage to the Tantric Masters from whom they have received the highest initiations. (Is there need to mention that you should too?)

3. Three times each day, with supreme faith, you must show your respect to your Guru who teaches you (the tantric path), by pressing your palms together, offering a mandala as well as flowers and prostrating (touching) your head to his feet.

4. Those who hold ordination vows, if (your Guru) is a layman or your junior, prostrate (in public) while facing such things as his scriptural texts in order to avoid worldly scorn. But in your mind (prostrate to your Guru).

5. As for serving (your Guru) and showing him respect, such as obeying what he says, standing up (when he comes) and showing him to his seat – these should be done even by those with ordination vows (whose Gurus are laymen or their juniors). But (in public), avoid prostrating and unorthodox actions (such as washing his feet).

6. In order for the words of honour of neither the Guru nor the disciple to degenerate, there must be a mutual examination beforehand (to determine if each can) brave a Guru-disciple relationship.

7. A disciple with sense should not accept as his Guru someone who lacks compassion or who is angersome, vicious or arrogant, possessive, undisciplined or boasts of his knowledge.

8. (A Guru should be) stable (in his actions), cultivated (in his speech), wise, patient and honest. He should neither conceal his shortcomings, nor pretend to possess qualities he lacks. He should be an expert in the meanings (of tantra) and in its ritual procedures (of medicine and turning back obstacles). Also he should have loving compassion and a complete knowledge of the scriptures.

9. He should have full experience in both ten fields, skill in the drawing of mandalas, full knowledge of how to explain the tantras, supreme faith and his senses fully under control.

10. Having become the disciple of such a protecting (Guru), should you then despise him from your heart, you will reap continual suffering as if you had disparaged all the Buddhas.

11. If you are so foolish as to despise you Guru, you will contract contagious diseases and those caused by harmful spirits. You will die (a horrible death) caused by demons, plagues or poison.

12. You will be killed by (wicked) kings or fire, by poisonous snakes, water, witches or bandits, by harmful spirits or savages, and then be reborn in a hell.

13. Never disturb you Guru’s mind. Should you be foolish and happen to do this, you will surely boil in hell.

14. Whatever fearful hells have been taught, such as Avici, the Hell of Uninterrupted pain, it is clearly explained that those who disparage their Gurus will have to remain there (a very long time).

15. Therefore, exert yourself whole-heartedly never to belittle your Tantric Master who makes no display of his great wisdom and virtues.

16. (If from a lack of awareness you have shown disrespect) to your Guru, reverently present an offering to him and seek his forgiveness. Then in the future such harms and plagues will not befall you.

17. It has been taught that for the Guru to whom you have pledged your word of honour (to visualize as one with your meditational deity), you should willingly sacrifice your wife, children and even your life, although these are not (easy) to give away. Is there need to mention your fleeting wealth?

18. (Such practice of offering) can confer even Buddhahood on a zealous (disciple) in his very lifetime, which otherwise might be difficult to attain even in countless millions of eons.

20. Those who wish (to attain) the inexhaustible (state of a Buddha’s Wisdom Body) should give to their Guru whatever they themselves find pleasing, from the most trifling objects to those of best quality.

21. Giving (to your Guru) is the same as making continual offerings to all the Buddhas. From such giving, much merit is gathered. From such collection comes the supreme powerful attainment (of Buddhahood).

22. Therefore, a disciple with the good qualities of compassion, generosity, moral self-control and patience should never regard his Guru and the Buddha Vajradhara as different.

23. If you should never tread even on (your Guru’s) shadow, because the fearsome consequences are the same as destroying a stupa, is ther need to mention never stepping on or over his shoes or seat, (sitting in his place or riding) his mount?

24. (A disciple) having great sense should obey the words of his Guru joyfully and with enthousiasm, If you lack the knowledge or ability (to do what he says), explain in (polite) words why you cannot (comply).

25. It is from your Guru that powerfull attainments, higher rebirth and happiness come. Therefore, make a whole-hearted effort never to transgress your Guru’s advice.

26. (Guard) your Guru’s belongings as you would your own life. Treat even your Guru’s beloved (family) with the same (respect you show for him). (Have affectionate regard for) those closely around him as if they were your own dearest kin. Single-mindedly think (in this way) at all times.

27. Never sit on the (same) bed or seat (as your Guru), nor walk ahead of him. (At teachings do not) wear your hair in a top-knot, (a hat, shoes or any weapons). Never touch a seat (before he sits down, or if he happens to sits on the ground. Do not) place your hands (proudly) on your hips or wring them (before him).

28. Never sit or recline while your Guru is standing (nor lie while he is sitting). Always be ready to stand up and serve him skilfully in an excellent manner.

29. In the presence of your Guru, never do such things as spit, (cough or sneeze without covering your head). Never strech out your legs when at your seat, nor walk back and forth (without reason before him, and never) argue.

30. Never massage or rub your limbs. Do not sing, dance or play musical instruments (for other than religious purposes). And never chatter idly or speak in excess (or too loudly) within the range of (your Guru’s) hearing.

31. (When your Guru enters the room) get up from your seat and bow your head slightly. Sit (in his presence) respectfully. At night, at rivers or on dangerous paths, with (your Guru’s) permission, you may walk before him.

32. In the direct sight of his Guru, (a disciple) with sense should not (sit) with his body twisted around, nor lean (casually) against pillars and such. Never crack your knuckles, (play with your fingers or clean your nails).

33. When washing (your Guru’s) feet or his body, drying, massaging (or shaving) him, precede such actions with (three) prostrations and at their conclusion do the same. Then attend (to yourself) as much as you like.

34. Should you need to address (your Guru) by his name, add the title “Your Presence” after it. To generate respect for him in others, further honorifics may also be used.

35. When asking for your Guru’s advice, (first announce why you have come). With palms pressed together at your heart, listen to what he tells you, without (letting your mind) wander about, Then (when he has spoken), you should reply, “I shall do exactly as you have said.”

36. After doing (what your Guru has told you), report (what has happened) in polite, gentle words. Should you yawn or cough, (clear your throat or laugh in his presence), cover your mouth with your hand.

37. If you wish to receive a certain teaching, request three times with your palms pressed together, while before him on your (right) knee. (Then at his discourse), sit humbly and with respect, wearing appropriate clothing that is neat (and clean, without ornaments, jewelery or cosmetics).

38. Whatever you do to serve (your Guru) or show him respect, should never be done with an arrogant mind. Instead you should be like a newly-wed bride, timid, bashful and very subdued.

39. In the presence of (the Guru) who teaches you (the Path), stop acting in a conceited, coquettish manner. As for boasting to others what you have done (for your Guru), examine (your conscience) and discard all such acts.

40. If you are (requested) to perform a consecration, (an initiation into) a mandala, a fire puja or to gather disciples and deliver a discourse, you may not do so if your Guru resides in that area, unless you receive his prior permission.

41. Whatever offerings you receive from performing such rites as (the consecration known as) “Opening the Eyes”, you should present all these to your Guru. Once he has taken a token portion, you may use the rest for whatever you like.

42. In the presence of his Guru, a disciple should not act (as a Guru) to his own disciples and they should not act towards him as their Guru. Therefore (before your own Guru), stop (your disciples) from showing you respect such as rising (when you come) and making prostrations.

43. Whenever you make an offering to your Guru, or whenever your Guru presents you with something, a disciple with sense will (present and) receive this, using both hands and with his head slightly bent.

44. Be diligent in all your actions, (alert and) mindful never to forget (your word of honour). If fellow-disciples transgress (what is proper) in their behaviour, correct each other in a friendly manner.

45. If because of sickness you are physically (unable) to bow to your Guru and must do what normally would be prohibited, even without (his explicit) permission, there will be no unfortunate consequences if you have a virtuous mind.

46. What need is there to say much more. Do whatever pleases your Guru and avoid doing anything he would not like. Be diligent in both of these.

47. “Powerful attainments follow from (doing what) your Guru (likes).” This has been said by (the Buddha) Vajradhara himself. Knowing this, try to please your Guru fully with all the actions (of your body, speech and mind).

48. After a disciple has taken refuge in the Triple Gem and developed a pure (Enlightened) motive, he should be given this (text) to take to his heart (how to abandon his own arrogant self-will and) follow in his Guru’s footsteps (along the Graded Path to Enlightenment).

49. (By studying the prerequisite trainings of Guru-devotion and the Graded Path, common to both the Sutra and Tantra,) you will become a (suitable) vessel (to hold) the pure Dharma. You may then be given such teachings as Tantra. (After receiving the proper initiations,) recite out loud the fourteen root vows and take them sincerely to your heart.

50. As I have not made the mistake (of adding my personal interpretation) when writing this work, may this be of infinite benefit to all disciples who would follow their Guru. By the limitless merit I have gathered in this way, may all sentient beings quickly attain Buddhahood.