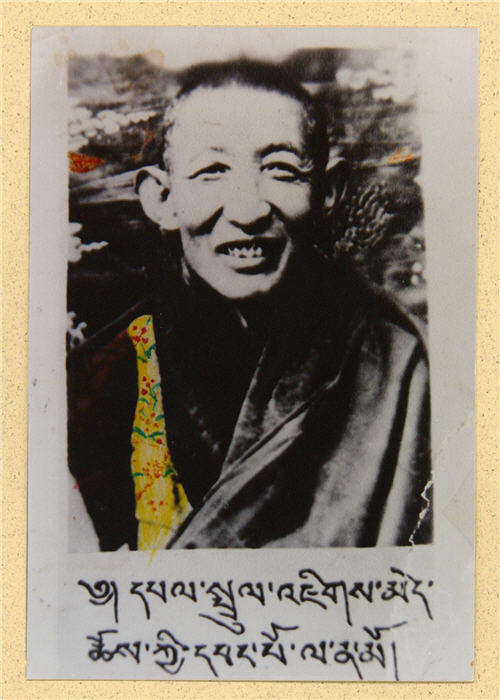 za Palge Tulku or Dzogchen Patrul Rinpoche was born in the Earth Dragon year of the fourteenth calendrical cycle in Getse Dzachukha, in the nomadic area of northern Kham, to a family with the name of Gyaltok. He was recognized by Dodrupchen Jikmé Trinlé Özer as the incarnation of Palgé Samten Phuntsok and was given the name Orgyen Jikmé Chökyi Wangpo.

At an early age, he learned to read and write without any difficulty. He took ordination with Khen Sherab Zangpo. With Dola Jikmé Kalzang, Jikmé Ngotsar, Gyalsé Shenpen Thayé and other teachers, he studied the Trilogy of Finding Comfort and Ease, The Way of the Bodhisattva, Secret Essence Tantra and many other works related to sutra and tantra, as well as the ordinary sciences. From Shechen Öntrul Thutob Namgyal, he received the reading transmission for the Translated Word of the Buddha (Kangyur) and teachings on Sanskrit grammar. He received the transmissions for the Kangyur and Tengyur in their entirety, together with the excellent writings of the omniscient father and son of the Nyingma tradition, as well as the works of Sakya Pandita, Lord Tsongkhapa, and many other great masters of the old and new translation schools, and by studying and reflecting on them with diligence and persistence and without any sectarian bias, he attained a perfect level of scholarship.

Not only did he receive instruction on the Longchen Nyingtik preliminaries some twenty-five times from Jikmé Gyalwé Nyugu, he completed the required practices the same number of times. In addition, he received instruction on tsa-lung practice and Dzogchen, and studied many of the cycles of practice found in the canonical scriptures (kama) of the Nyingma school. Do Khyentse Yeshe Dorje introduced him directly to the pure awareness of rigpa while exhibiting wild and eccentric behaviour. He trained for a long time in the Longchen Nyingtik tsa-lung practices, and he received immense amounts of nectar-like Dharma from Dzogchen Rinpoche Mingyur Namkhé Dorje and other masters.

While dwelling for long periods near Dzogchen Monastery in the isolated hermitages of Rudam, such as the Yamantaka cave and the Long Life cave, he put all his energy into the practice of meditation and attained a realization that was as vast as space.

From the age of thirty, he travelled to Serthar, Yarlung Pemakö and other places, teaching extensively on the Secret Essence Tantra to gatherings of fortunate vidyadharas. To assemblies in Serthar and in the upper and lower regions of the Do valley he bestowed countless gifts of the Dharma, teaching on The Way of the Bodhisattva, Mani Kabum, Aspiration Prayer of Sukhavati and so on. He put an end to robbery and banditry and abolished the custom of serving meat at special gatherings.

He went to Dzamthang and studied the six yogas with Tsangpa Ngawang Chöjor, and he went to Minyak, where he had extensive discussions with Dra Geshe Tsultrim Namgyal on the prajnaparamita and other topics. In this way, he went about as a renunciate, having abandoned all worldly concerns, and worked impartially for the sake of others, without any fixed agenda or itinerary.

In Shri Singha college at Dzogchen Monastery and at Pemé Thang and other places, he turned the wheel of Dharma uninterruptedly, teaching on the treatises of Maitreya, the Middle Way, Abhidharma, Secret Essence Tantra, Treasury of Precious Qualities, Ascertainment of the Three Vows and other topics. In particular, when he taught on The Way of the Bodhisattva in the vicinity of Dzogchen Shri Singha for several years in succession, large numbers of flowers called Serchen, with between thirty and fifty petals, blossomed all of a sudden, and they became known as ‘bodhicharyavatara flowers.’

When Tertön Chokgyur Dechen Lingpa took the terma of Demchok Sangye Nyamjor from Rudam Kangtrö, the snow hermitage at Dzogchen, he appointed Patrul Rinpoche as the custodian of this and other cycles, including The Heart Essence of the Three Families (Riksum Nyingtik), and offered him all the necessary empowerments, reading transmissions and instructions.

He went to Kathok Dorje Den, where he offered prostrations and circumambulated the reliquaries of the three great masters Dampa Deshek, Tsangtön Dorje and Jampa Bum. At the request of Situ Choktrul Chökyi Lodrö and others, he gave extensive explanations on The Way of the Bodhisattva to the whole assembly of monks. He went to major monasteries of the Riwo Gendenpa tradition such as Sershul, Labtridu, Chuhor and others and taught elaborately on The Way of the Bodhisattva and other topics. Since he taught clearly and succinctly, relating everything to the key points of practice, even many holders of the title Geshe Lharampa scattered flowers of praise and bowed before him in devotion.

He established a teaching centre in the vicinity of Dzagyal Monastery. When repairing the great complex of walls of ‘mani’ stones (do-bum) built by his previous incarnation Palge Samten Phuntsok, it became exceedingly beautiful and even bigger and taller than before, and thereafter became known as the Patrul Dobum.

This great master devoted his life entirely to study, contemplation and meditation for his own benefit and teaching, debate and composition for the sake of others. In so doing, he helped to make the teaching and study of texts such as The Way of the Bodhisattva, the treatises of Maitreya, the Three Sets of Vows and Treasury of Precious Qualities as widespread as the very stones and earth throughout the upper, middle and lower regions of East Tibet. In particular, when the tradition of teaching the Secret Essence Tantra, and the traditions of experiential guidance and tsa-lung practices for the Longchen Nyingtik were just like lamps whose fuel is almost spent, through his great kindness he revived them and made them even stronger and more widespread than before.

Finally, on the eighteenth day of Saga Dawa in the Fire Pig year of the fifteenth calendrical cycle, he displayed the signs of dissolving his form body into the all-pervading space of reality.

Patrul Rinpoche composed countless works to suit the individual minds of his disciples and fulfil their aspirations, and although they cherished these and kept them for themselves, they were not collected by the master himself or by his attendants, and thus many of them were never carved into printing blocks. Those which were printed and which are now to be found, like nectar upon which we might feast our eyes, comprise volumes equal in number to the six paramitas. Amongst these compositions, we find all manner of works, including commentaries on and structural outlines (sa bcad) for the treatises of Maitreya, The Way of the Bodhisattva, Treasury of Precious Qualities and other texts, profound crucial instructions for guiding students experientially, such as The Words of My Perfect Teacher, collections of advice and miscellaneous writings including The Drama in the Lotus Garden, collections of praises and so on. In all that he wrote, he never went into excessive detail simply to show off his knowledge, but explained things in order to fit the capacity of students.

The extraordinary and special character of his teachings was described by Dodrupchen Jikmé Tenpé Nyima in his biography of Patrul:

“If analyzed by the wise, they are found to be very meaningful. If heard by the dim-witted, they are easy to understand. As they condense the vital points, they are easy to remember. Just the right length, everything is coherent and connected from beginning to end. They are delightful to the ear, and whatever words he uses, hard or gentle, they become ‘of one taste’ with the instructions, and so captivate the minds of all, whether wise, confused, or somewhere in between.”

In other words, he completed some two and a half million prostrations, and the same number of hundred syllable mantras, mandala offerings and repetitions of the Seven Line prayer. Few masters in Tibetan history have accomplished such a feat. Two notable exceptions are the great Je Tsongkhapa, who famously completed three and a half million prostrations and approximately ten million mandala offerings, and, in more recent times, the Sakya master Gatön Ngawang Lekpa, who accumulated a vast number of prostrations and other practices during his fifteen years of strict retreat.