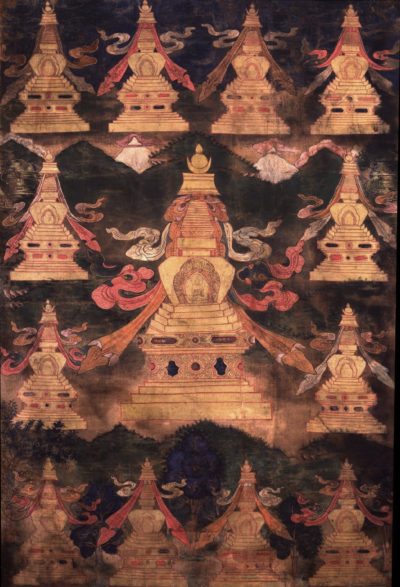 “The Sun Radiating Light of Goodness and Munificence: Laying Out the Points of Guided Meditations Of the Path of Bliss, A Treatise on the Path to Enlightenment” by the Fourth Amdo Zhamar Gendun Tenzin Gyatso. Translated by Tenzin Tsepag.

The Sun Radiatiing Light of Goodness and Munificence: Laying Out the Points of Guided Meditations Of the Path of Bliss, A Treatise on the Path to Enlightenment.

Equalling the expanse of the space of knowledge (she-ja) in the three times, Magnificent with the sacred light of excellent (rab) wisdom,

From the depths of my heart I bow to my kind master skilled in spreading out The delightful lotus of scripture and realization until the end of the ocean (gya tsho).

Of the ocean (tsho) of your compassionate magical sport. In the endless ocean of virtuous deeds beyond limit

Appear exquisitely from which you sprinkle forth the nectar of wisdom:

To you, full moon amongst the sage-teachers, my obedience!

Ajita and Manjugosha, the embodiments of compassion and wisdom, respectively;

And Nagarjuna and Asanga, The best lamps illuminating the profound and extensive paths I bow to them and their teaching lineages.

Clarifying the sweet clear river course of the Land of Snows,

Which has been polluted by the dirts of misunderstanding,

You became the trailblazer of the unmistaken complete path: I worship you on my crown, O Glorious Dipankarashrijnana.

Through the hundred thousand rays of unprecedented wisdom

You outshine the ten million constellations of sweet talkers

When I found confidence in you as the unity of the three lineages (Manjushri, Avalokiteshvara and Vajrapani): I bow to you with highest reverence.

Not satiated with the well of partiality, you practiced and experienced

[Page 3] The essence of the ocean of Sutra and Tantra

And journeyed to the deathless level of eternally blissful state: I bow to you scholar-adept masters and their successors.

The primordial wisdom body of all the victorious ones (buddhas)

And leading them to the jewel island of total liberation I beseech you all, whose kindness is unmatched, to sit in the centre of my heart!

What are, and what are not, the means by which we are led

To this cycle of existence, the city of sea monsters, filled with the turbulent waves of suffering,

And to quickly cross it to reach the great palace of omniscience?

This is what the inquisitive wise ones must engage in over and over again?

Therefore, I am very delighted to write a clear suitable text

On the meaning of the scriptures, exegeses as well as their explanations

In a single synthesis constituting the stages of the path,

The essence of the true experiences of holy lineage masters.

So here, the guided instructions on the stages of the path to enlightenment—which is the main path treaded by all the victors of the three times, which condenses the essential meaning of the 84000 scriptures into the paths to be practiced/experienced by the fortunate ones, and which is the personal instruction that certainly proves greatly beneficial to all three types of practitioners: highest, medium and low—is explained in two parts:

How to rely on a teacher, the root of the path, and

Having relied on him, the steps of training the mind.

The first of these has two parts:

The Fourth Amdo Zhamar Gendun Tendzin Gyatso (a mdo zhwa dmar 04 dge ‘dun bstan ‘dzin rgya mtsho) was born in Zhamar (zhwa dmar) village in Dabzhi (mda’ bzhi) in the Tsongon (mtsho sngon) region of Amdo, in 1852, the water-mouse year of the fourteenth sexagenary cycle. His father was named Benyen (ban yan) and his mother was called Machik (ma gcig). He was the youngest of his brothers and sisters. Dabzhi was a place with strong connections with Lamo Dechen Monastery.

When he turned four, he was enthroned to the throne of his predecessor at Lamo Dechen (la mo bde chen) Monastery where he studied reading and writing under Geshe Rongpo Alag (dge bshes rong po a lags, d.u) and Kunpangpa Tendzin Gyeltsen (kun spangs pa bstan ‘dzin rgyal mtshan, d.u)

When he turned sixteen he became secretary of the monastery, a post he seemed not have enjoyed, as three years later he fled to Rongpo (rong po) Monastery in Rebkong (reb gong) in order to enter into meditation retreat. There he had an audience with the Second Arol, Lobzang Lungrik Gyatso (a rol 02 blo bzang lung rigs rgya mtsho, 1805-1886).

Soon after, at the command of the Second Arol, he matriculated in Labrang Tashikyil (bla brang bkra shis khyil). There he studied with numerous masters, including Khewang Gendun Zangpo (mkhas dbang dge ‘dun bzang po, d.u); Zhangton Tenpa Gyatso (zhang ston bstan pa rgya mtsho, 1825-1897); and Drungchen Sherab Gyatso, with whom he had studied at Lamo Dechen, and who gave him novice ordination at the age of twenty. When he was either twenty-three or twenty-seven he received full ordination from Khuluk Geshe Nyima Richen (khu lugs dge bshes nyi ma rin chen, d.u).

The Amdo Zhamar spent much of the next fifteen years in retreat. Beginning at the age of thirty-six, at the command of the Second Arol and of Shingza Paṇḍita Lobzang Dargye Gyatso (shing bza’ paN+Di ta blo bzang dar rgyas rgya mtsho, 1752-1824), he entered retreat at Samten Choding (bsam gtan chos sdings) Hermitage. A large number of practitioners gathered around him and as a group they began to wander the region. Eventually they settled at a place that was given the name Ditsa (lde tsha, or dhi tsha), and Horchen Yeshe Gyatso (hor chen ye shes rgya mtsho, d.u.) was invited to teach.

The monastery grew dramatically from the outset, its reputation bolstered by its strict regimen of teaching that attracted around three thousand students before the Fourth Zhwa dmar died

In 1896, when he was forty-five, he spent the winter months at Madram Dorje Drak (rma ‘gram rdo rje brag) hermitage. There, under the guidance of Dharmakīrti Pelzang (d+harma kirti dpal bzang, d.u.) he edited works on Madhyamaka with Geshe Sherab Gyatso and the Seventh Zhabdrung Karpo, Gendun Tendzin Norbu (zhabs drung dkar po 07 dge ‘dun bstan ‘dzin nor bu, 1873-1927). In 1902 he supervised the carving of the collected works of Tarshul Gendun Chokyong Gyatso and composed the table of contents.

Some time between 1905 and 1907, the Thirteenth Dalai Lama, Tubten Gyatso ( tA la’i bla ma 13 thub bstan rgya mtsho, 1876-1933), who had fled Lhasa in advance of the British Younghusband invasion of Tibet in 1904, was residing at Kumbum Monastery. The Amdo Zhamar met him there and gave him extensive empowerments and instructions, and so impressed the Dalai Lama that the later gave him the title of paṇḍita together with a seal and a large number of gifts. Thereafter he was known as Zhamar Paṇḍita.

His compositions, on over fifty-eight different topics, were collected into nine volumes.

He passed away at the age of sixty one, in 1912, the water-male mouse year of the fifteenth sexagenary cycle.  https://www.google.it/search?q=Fourth+Amdo+Zhamar+Gendun+Tenzin+Gyatso&safe=off&tbm=isch&source=iu&ictx=1&fir=af9oPHoS1YOvUM%253A%252Ca1beTF7flth8HM%252C_&usg=AI4_-kQ6QE0OB6icoYVX23Rd6p1NYIxSuw&sa=X&ved=2ahUKEwjk46SQiJ7gAhVSzaQKHZGvDWkQ9QEwAXoECAUQBA#imgrc=af9oPHoS1YOvUM: