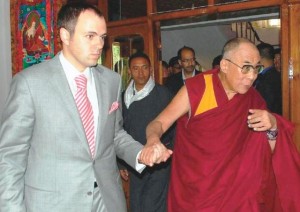 His Holiness the Dalai Lama today Monday, August 10, arrived on a 20-day religious tour of Ladakh, a predominantly Buddhist region of Jammu and Kashmir state.
Welcoming the Tibetan leader was the Chief Minister Omar Abdullah, his cabinet colleagues and government officials. The Chief Minister took the role of a chauffeur by driving the Tibetan leader in an official vehicle from Bakula airport to Shiwai Gatsel, His Holiness’ palace in Choglamsar, near the capital Leh.
Large crowds of locals, including Buddhists, Muslims and Hindus with flowers, incense and traditional well-wishing scarves (khatag) stood on each side of the road to get a glimpse of the Tibetan leader on his way to the palace.
After arriving at the palace, the Tibetan leader expressed his gratitude to the Chief Minister for the hospitality his state has offered. His Holiness also told Omar that he had a very friendly relationship with his grandfather and founder of National Conference Sheikh Mohammad Abdullah and his father Farooq Abdullah.
The Tibetan leader will confer religious initiations and give teachings in various places including Zanskar region and will finish his tour on August 29.

In the meanwhile, the special pilgrimage group of FPMT Sangye Cioeling Dharma Center (named by his His Holiness the Dalai Lama) Dharma for inner peace and harmony, Sondrio Italy, is on a journey through the high Himalayan passes of Ladak to reach the heart of the culture of the Land of Snows in India: the remote valley of Zanskar, where His Holiness the Dalai Lama will give his precious teachings August 17-19 which will be completed with the Mitrupka initiation. We will maintain our promise: we will write and register on this blog the words of wisdom of His Holiness the Dalai Lama for the benefit of all sential beings and for those who are unable to come right up here.