Yesterday, when we started explaining the Stages of Meditation by Kamalashila, we studied about the Buddhist concept of interdependent origination in a grosser form. In general, when we discuss about interdependent origination, it has different levels – the grosser level and the subtler levels. There are also differences in terms of profundity of the interpretations of different Buddhist schools of thought. But here, what we have studied in the beginning of the Stages of Meditation is the concept and the meaning of interdependent origination, which is accepted commonly by all the Buddhist philosophical systems. The interdependent origination that we have studied there was in the context of cause and effect relationship, which primarily states that the happiness that we experience, and the sufferings that we experience, they arise from their individual causes and factors, and therefore the happiness that we experience and the sufferings that we experience can be changed if we change the causes and factors, that are responsible for experiencing happiness and suffering. And therefore this whole concept of cause-effect relationship or karma, should be understood within the general context of the law of causality, that in general there is a process, or there is a way how cause-effect functions as a natural phenomenon, as a natural process of the law of nature. Within that context of the general process of functioning of cause-effect relationship, when human beings in relation to their mental emotions, in relation to certain motivations, when they commit certain positive deeds and negative deeds, that is what is known as karma that we primarily understand in Buddhism. END_OF_DOCUMENT_TOKEN_TO_BE_REPLACED

As is outlined in this verse by Maitreya, if we possess a wish to benefit other sentient beings, or if we possess the altruistic wish to achieve enlightenment for the sake of all sentient beings, based on which we cherish the well-being of other sentient beings more than oneself, then naturally as a byproduct one will stop accumulating the non-meritorious actions, which are responsible for taking birth in the negative states of existence. And when we are able to develop a positive mind like that of bodhicitta, which we can say is the ultimate form of beneficial mind, because of generation of such a mind our virtuous practices will naturally get increased, and it is in this way that we will gradually achieve a higher status. END_OF_DOCUMENT_TOKEN_TO_BE_REPLACED 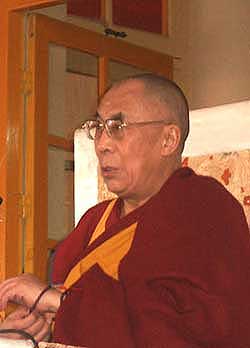 His Holiness the Dalai Lama: The principal core of the practice of the Buddha’s teachings is the cultivation of bodhicitta, the altruistic aspiration to attain Buddhahood.

The great teacher Nagarjuna who is in fact considered as a second teacher in this era of the Buddha Shakyamuni’s teachings, he states in his Precious Garland or Ratnavali that those who aspire to attain the state of full enlightenment must seek the three principal factors. He states that anyone who aspires to attain full enlightenment must seek its means, seek its causes. What are these correct causes? He identifies three principal factors. The first is bodhicitta, which is the aspiration to attain Buddhahood for the benefit of all beings thus the generation of this altruistic intention, is the first principal cause.

174 And abandon those counter to them. END_OF_DOCUMENT_TOKEN_TO_BE_REPLACED