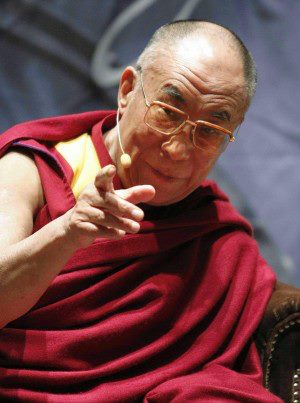 His Holiness the Dalai Lama: “The very reason that things perish and disintegrate is because they have a cause”.

Fifth part of His Holiness the Dalai Lama’s teachings Nov. 30 – Dec. 13, 2012 on the 18 Great Stages of the Path (Lam Rim) Commentaries at Gaden and Drepung Monasteries in Mundgod, India, see http://www.jangchuplamrim.org/ and video here http://www.dalailama.com/webcasts/post/267-18-great-stages-of-the-path-lam-rim-commentaries. Translated from Tibetan into English by Mr Tenzin Tsepag. Trascript by Dr. Peter Lawrence-Roberts, first revision and editing by Dr. Luciano Villa within the project “Free Dalai Lama’s Teachings” for the benefit of all sentient beings. We apologize for any possible errors and omissions.

Both humans and animals go through immense pain when giving birth. So birth is definitely suffering. So, unless we work to end this kind of birth that is brought about by karma we will continue to suffer. Our current body comes about through afflictions and karma. Having a physical body causes the generation of karma that will bring about further physical births. So, again, birth is suffering. Chandragomin’s Letter to a Student or ‘Letter to a Disciple’ (Shishya-lekha) explains in detail the suffering of birth.

The very reason that things perish and disintegrate is because they have a cause. We are all slaves to ignorance. The only way to counter this ignorance is to understand the true nature of reality.

If we meditate on just how much suffering there is in the world we will develop the wish to be free of that suffering.

No matter how advanced we may be on the path we still have a very strong sense of an objectively existing ‘I’. We are shrouded in the darkness of ignorance to such an extent that no light gets through. The only way to get through is to develop a strong desire to be free of such ignorance. We can also think that all our mothers from previous lives are suffering similarly, so we can develop great compassion with a wish to free all beings from this ignorance.

Our very good friend can become our sworn enemy the next day, maybe because of something we have said or done. Then they develop hatred and anger and cause themselves great harm.

We have to see the pros and cons of different aspects of practices, understand them fully, then integrate them into our overall practice. For example, in the Kagyu tradition we cannot practice Mahamudra without first understanding the components which make it up.

We have wasted limitless physical bodies in the past by failing to develop a desire to be free of the suffering that is linked to a physical body. Nagarjuna says that we have built up a pile of bones bigger than Mount Meru.

No matter what level of high authority and wealth we may have achieved in life, we lose it all at the time of death. The end of gain is loss, the end of meeting is separation. What is high must fall low, the end of life is death. We are born alone and we die alone.

There is no end to the stream of rebirths, so we should reflect on the suffering this will bring. Pervasive suffering embraces all other forms of suffering, so we should meditate regularly upon it and understand it for what it is. When we lose the things we are attached to we feel sad. We can use this opportunity to develop patience. Our thoughts do not need to rely on sensory objects. If we are lost to our sensory perceptions and physical impulses we lose the benefit of having a human mind which enables us to benefit ourselves and others in a way that other sentient beings can’t.

Most of our unpleasant experiences come from the way we use our own mind. This cannot occur through external sensory pleasures Ann gratification. For example, if we are anxious or fearful, we can only remove these by working with our mind. Sensory pleasure and gratification will not work. If we do anything for too long, even pleasurable things, they become suffering.

One of the Karmapas said that it is a good thing that old age comes gradually, bit by bit. If it were to come all at once the suffering would be unbearable.

If afflictions are present the we automatically create more karma for the future, thus keeping us bound in samsara and causing disturbance in our peace of mind. Very subtle thoughts and emotions afflict our mind in very subtle ways. When they arise they afflict our mind stream. When afflictions grow stronger and become bound up with an object of grasping or aversion it is very difficult to remove them, just as it is very difficult to wring oil from a cloth.

Doubt of itself is not an affliction. It can prompt investigation and analysis. However, we can also suffer with afflictive doubt, causing us to see ourselves as having a solid self etc.

We have the notion that ‘I’ was born then, or ‘I’ came from such and such a past life. We know rationally that we don’t have the same mind or body that we had at birth, yet still we grasp strongly at that notion. Although things appear strongly to have an independent existence we know such an existence to be impossible.

Karma is in general of three types: virtuous, non-virtuous and ethically neutral.

Pujas and prayers for a deceased person can, perhaps, be helpful if there is a karmic connection with the person, such as children with parents or a student with a teacher. However, ultimately, all of us can only meet with the karma that we have created.

Some of the ‘medical’ details in the text to do with the interaction of blood and semen are very questionable. Science has now produced human embryos in test tubes outside of the womb.

Nagarjuna says in the Ratnavali, see http://www.sangye.it/altro/?p=611, that when the correct elements are not there, now can there be a form? We can see no form if the elements aren’t there. We can use strong reasoning to counter the objectification of things. Chapter 22 of Nagarjuna’s Fundamental Wisdom of the Middle Way, see http://www.sangye.it/altro/?p=513, is helpful here. According one philosophical view the consciousness is the identity of the person. Although it is difficult for us to assert according to the Madhyamaka Prasangika that we are a mere name, a label, a designation, this is the true view and we should seek to assert that and use logic to argue that it is so.

Even for those who are non-Buddhist, to have a quiet and calm mind at the time of death is hugely beneficial. Rituals and belief systems can be followed to bring calm. We should strive as much as possible to have no thoughts of harm towards others, even our enemies, at the time of death. The creation of harmful thoughts would be like going from light into thick darkness.

Asanga, and his brother Vasubandhu, said ignorance is merely confusion about the nature of reality.

Selflessness is the principal remedy for ignorance. Ignorance is the product of negative karma. The disintegration of karma, as asserted by the highest Mahayana teachings, is very important. When the seed of new karma is being planted in the consciousness mind, this is not the same as the self.

To go through all the 12 Links of Dependent Origination at least two lifetimes need to be gone through. However, normally it takes three lifetimes.

Asanga stated that the 12 Links of Dependent Origination lead us to project the self as something that is not self-sustaining, and so it is dependent on the body. The principle is that the self cannot exist other than in dependence on the body.

It is vital for Bodhisattvas to cultivate intense disenchantment with cyclic existence so that they focus on the cultivation of bodhicitta in order to free all beings from cyclic existence.

Chandrakirti says that Bodhisattvas who take on compassionate care for all sentient beings do not fear the impact on their own body and mind. They rejoice in this activity and feel no fear for themselves. Bodhisattvas take on countless rebirths in cyclic existence in order to relieve the sufferings of others.

There were three reasons for the decline of Buddhism in India:

Because the Prasangika does not assert any kind of entity in things they have a more subtle view of impermanence.

There can be grave consequences for us if we take a vow to practice some aspect of ethical discipline and then fail to keep it.

The term ‘discipline’ has the connotation of a higher authority giving orders, but we also have the term ‘self-discipline’. No one is forcing us to do anything. We decide voluntarily to adhere to moral ethics and vows. We shouldn’t just follow the path out of fear. We should do it voluntarily.

The Vinaya Pratimoksha sutra, see http://www.sangye.it/altro/?p=4657, was to become the teacher after the Buddha passed away. We should not give up our adherence to ethical discipline, even at the risk of our life.

We should know what the afflictive emotions are so we know the enemy in our mind and seek to uproot and disperse it as soon as it arises.