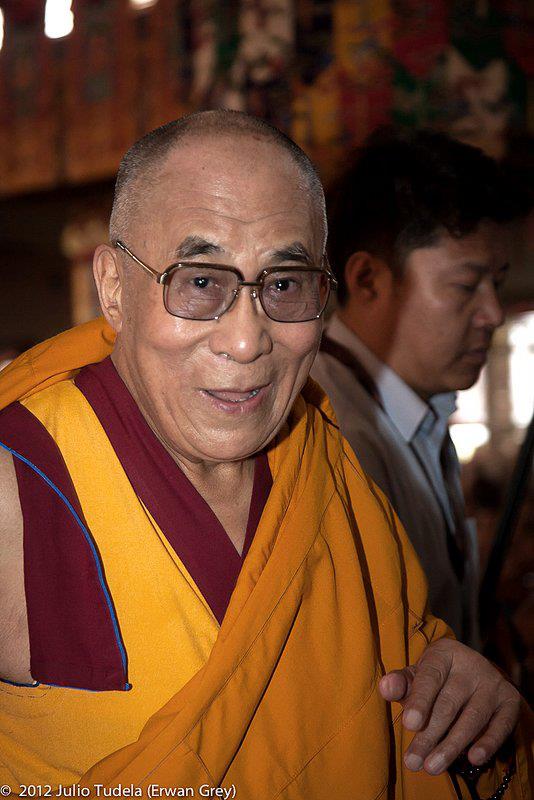 His Holiness the Dalai Lama: ”Studying the root texts of the Nalanda masters is the best way to preserve the Nalanda tradition, which is at the root of Tibetan Buddhism”.

Eleventh part of His Holiness the Dalai Lama’s teachings Nov. 30 – Dec. 13, 2012 on the 18 Great Stages of the Path (Lam Rim) Commentaries at Gaden and Drepung Monasteries in Mundgod, India, see http://www.jangchuplamrim.org/ and video here http://www.dalailama.com/. Translated from Tibetan into English by Lotsava Tenzin Tsepag. Trascript by Dr. Peter Lawrence-Roberts, first revision and editing by Dr. Luciano Villa within the project “Free Dalai Lama’s Teachings” for the benefit of all sentient beings. We apologize for any possible error and omission.

His Holiness started the day with preparations for the conferring of the White Tara initiation to be given at the end of the morning’s teachings.

I feel very fortunate to be able to give teachings on these two texts – Lama Tsong Khapa’s Lamrim Chenmo and Middle Length Lam Rim. I have taught them many times in the past, particularly the Lamrim Chenmo, but this may be the only opportunity I have to teach them together in this place. Listening to the Lam Rim texts should not be like listening to a story, but should help us to transform our minds afflicted by the Three Poisons, into the omniscient mind. So it is good to make at least some kind of transformation within. Having listened to the Lam Rim we should see ourselves, at least in part, as no longer being slaves to the three poisons. We have to put effort in and make it worthwhile.

To obtain the two bodies of the Buddha, the form body (rupakaya) and the truth body (dharmakaya) we need to practice bodhicitta and the realisation of emptiness. If we practice these two, then all other benefits and happiness will follow automatically as a by-product.

We can see from his writings how Nagarjuna paid homage to the Buddha. Following the Sakya tradition’s method for evaluating a text, we can examine his writings according to four criteria:

We can reflect on how we were before we heard the teachings on bodhicitta. Are we happier as a result of hearing these teachings, or not?

Our understanding of emptiness will give us some certainty concerning what the higher paths and grounds are and strengthen our faith in the Buddha. In this way we can be less afflicted by disturbing emotions, and maintain peace of mind, even in very difficult circumstances.

We can rely on the great masters of the past, as well as present lamas, so long as we see they follow the path and the texts of the earlier great masters. In this way we develop unshakeable faith in the teachings of the Buddha based on reason.

Next year we will gather to consider the rest of the 18 Lam Rim texts and we will be able to consider whether our reflection on these things, and practice of them over the year, has made a difference to us.

I’m now conferring the generation of bodhicitta and the bodhisattva vows. This is based on Lama Tsong Khapa’s text and was in decline. I asked Ling Rinpoche to revive it. This is being done as an auspicious conclusion to the transmission of the Lam Rim texts. It starts with the Seven Limb Prayer and is followed by In Praise of the 17 Nalanda Masters http://www.sangye.it/wordpress2/?p=2147 , both written by His Holiness.

If we take the bodhisattva vow we must study it and reflect on whether we can keep the precepts.

If we are mindful of our bodhicitta vow in this life then positive imprints will go to our next life, and the lives beyond that. The vow will remain with us until we attain enlightenment. We should make time, therefore, to become familiar with the bodhisattva scriptures.

Shantideva said that there is nothing greater that we can do than generate bodhicitta in ourselves. It is the nectar for overcoming death for sentient beings. Bodhicitta brings about the realisation of all our goals, both short terms goals and the longer term ones.

Some have taught by inspiring fear. Someone once wanted to see an abbot in Kham. His attendant said he wasn’t there, he had gone to frighten the old men and women in the village! Buddhism is never about frightening people. We need to see the benefits of generating bodhicitta, both for now and the longer term, and then be inspired to practice it based on reason.

In the Highest Yoga Tantra it says that those who don’t keep their commitments will have poor results. It is very important to adhere to the commitments we make.

His Holiness met with all foreign attendees at the teachings in the afternoon. He expressed his great appreciation to all foreigners for coming, in spite of difficulties with the hot Indian climate and the restricted area access to the Tibetan settlements and so on.

Every member of humanity has to show concern for every other human being and all other sentient beings. ‘I consider you all my friends. Do you see yourselves as my friend?’ I always think of what I can do to serve others so, please, if you are my friends, think what you can do to benefit others.

All the world’s religions have the same potential for teaching humanity the basic values of love, compassion, forgiveness, tolerance etc. All progress starts with the individual. It is a mistake to think that we can do nothing worthwhile as an individual.

Buddha’s blessing comes through our actions, not through prayer or through some blessing bestowed from above. We may pray to Buddhas and bodhisattvas for blessing and then think that we can achieve Buddhahood by this means rather than by our own effort. This is not the case. The Buddha made very clear that we are our own master. If we commit wrong actions and create negative karma, even the Buddha cannot take that away from us.

We need to promote adherence to moral and ethical principles. This should not be on the basis of religious faith as this is too narrow. It needs to be on a secular basis which respects all religions as well as non-believers.

The ultimate source of happiness is moral principles. What does this mean? It means to have love and affection for each other, irrespective of religious belief or none. Human affection is one of the most important things for our survival. Compassion brings inner strength and inner peace. Cultivating anger and hatred actually eats our immune system. These principles are nothing to do with Buddhism. They are universal principles.

We need friendship since we are social animals. Friendship is based on trust and trust is based on honesty and openness. This cannot be brought about by force. Force creates fear,which is the opposite of trust.

Personal self confidence is entirely based on developing a sense of sincere concern for the welfare of others. People who have real compassion are happy people. These principles should be part of our daily lives, and then we should share them with others.

Studying the root texts of the Nalanda masters is the best way to preserve the Nalanda tradition, which is at the root of Tibetan Buddhism. Shantarakshita, who introduced Buddhism to Tibet with the help of Padmasambhava http://www.sangye.it/altro/?cat=23, was a very great Nalanda scholar.