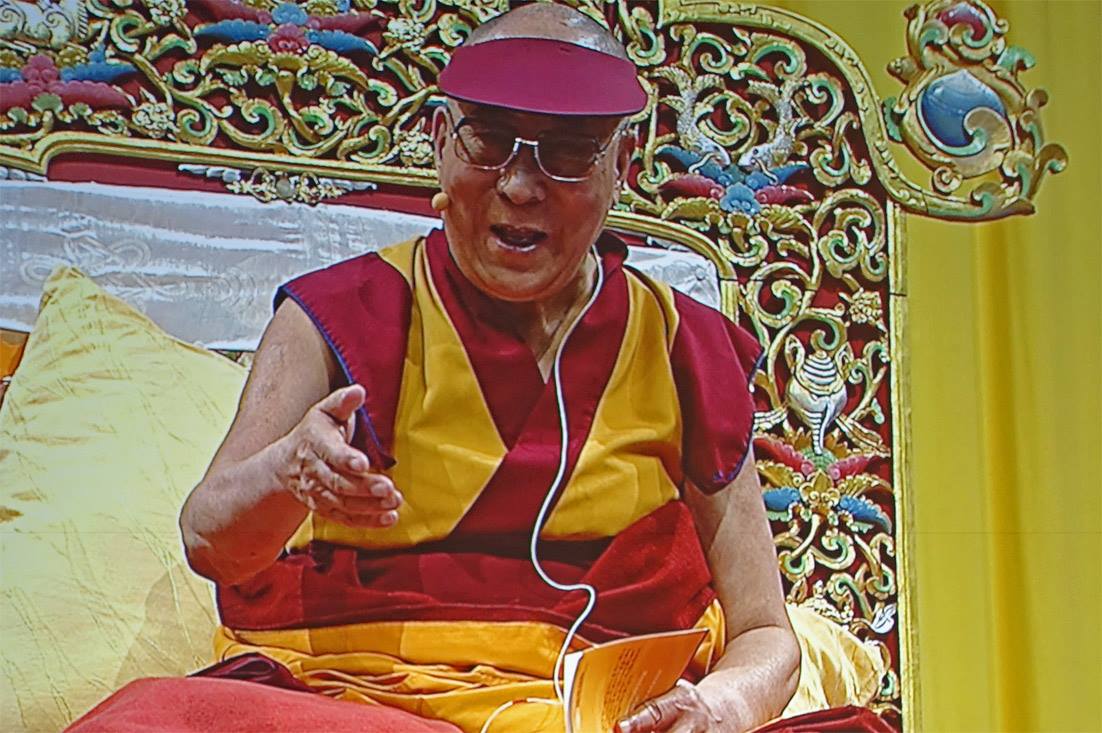 His Holiness the Dalai Lama: We need to follow the teachings of Buddha as it was taught by the Indian masters.

First part of His Holiness the Dalai Lama’s teachings based on Nagarjuna’s Commentary on  Bodhichitta (Bodhichittavivarana) and Geshe Langri Thangpa’s Eight Verses of Training the Mind in Basel, Switzerland, February 7-8, 2015. Translated from Tibetan into English by Mr Tenzin Tsepag. Trascript and notes by Dr. Luciano Villa, first revision and editing by Eng. Alessandro Tenzin Villa within the project “Free Dalai Lama’s Teachings” for the benefit of all sentient beings. We apologize for any possible errors and omissions.

At the beginning of the teaching I usually give introduction on Buddhism, because people say to take refuge in the Three Jewels but they don’t know what it means. In this case it looks that it should not be important to study the volumes of Kangyur and Tengyur which collects the Buddha’s teachings, but merely to have blind faith. But it isn’t like that. You must know what does the Three Jewels means and what does Buddhism means. So its very important to know what is the Nalanda tradition that we follow about.

Therefore I usually say that those who are usually Buddhist should understand what the term Sangye or Buddha means, who is someone who got Buddha-hood trough efforts, and what Dharma means, which comprises the true cessation and the true path.

Full enlightenment means what Dharma is. And we comprises that we should do through study and its not enough through single pointed meditation.

It isn’t enough to listen to the Buddha teachings, but we need to analyze through investigation, through reason. The tradition of the classic commentary texts says what is the method of the text and the relation, within the teachings there are teachings for general approach and others for very special disciples, which it does not fit for other who are not fit for teachings. We have to follow the general structure of teachings and tantric teachings are for very special practitioners.

To day session that we have is like taking a class in Buddhism.

We say: “I take refuge in the supreme Buddha Dharma and Sangha till I will obtain enlightenment in order that all sentient beings will get enlightenment”.

Refuge is shared both with Pali and Sanscrit tradition. As Millarepa said there is an inner refuge. May I become a Buddha for the enlightenment of all sentient beings, this is generation of bodicitta.

I take refuge in the Buddha, the Dharma, and the supreme Sangha,

Until I attain Enlightenment.

By the merit I accumulate from practicing generosity and the other perfections,

May I attain Enlightenment in order to benefit all living beings.

So, regarding the “Prayer to Seventeen Nalanda Masters” these two verses you should memorize because they contain the epitome of Nalanda tradition and realize how deep and great it is.

May I be blessed so that I plant the foundation for the path to freedom:

May I understand the fundamental nature of reality and the meaning of the two truths,

Gain certainty about the four truths and how samsara is perpetuated or discontinued,

And, through valid cognition, develop stable and lasting faith in the Three Jewels.

May I be blessed so that I come to master uncontrived bodhichitta,

Together with its roots: a mind of renunciation seeking the goal of perfect liberation,

In which all forms of suffering and their causes are thoroughly pacified,

And a compassionate wish to protect all beings, as limitless as space itself.

And the vajrayana, through studying, reflecting and meditating

Upon the meaning of the great pioneering masters’ classic works.

These two verses regards what Nagarjuna says: “All the Buddhas gave teachings on the two truths: conventional and ultimate”.

Buddhism flourished in India in the same time in which flourished other important philosophical religions like as Vaibashika, Sautantrika, Sharvaka, Samkya and Jains from the origin of Buddhism. Buddhism spread from India, specially from Nalanda, and so forth and then we have the philosophical school, and in Tibet since 8th century since Shantarakshita was invited by the Tibetan King Trisong Detseng. When later master Atisha came to Tibet, he gave teachings and wrote the Lamp to the Path to Enlightenment. Now we Tibetans have come in exile, it was not a voluntary leaving home, so we was pushed into world and our generation has changed since Padmasambava and Shantarakshita. Now we need to follow the teachings of Buddha as it was taught by Indian masters.

Classical scientist have actually held the view that the mind is located in the brain.