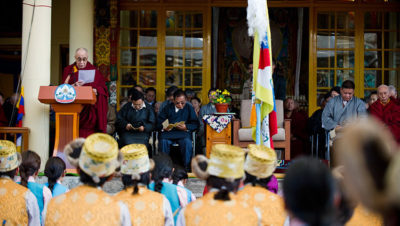 His Holiness the Dalai Lama reading his statement on the 52nd anniversary of Tibetan National Uprising Day at the Main Tibetan Temple in Dharamsala, HP, India on March 3, 2011. (Photo by Tenzin Choejor/OHHDL)

10 March 2011. Today marks the 52nd anniversary of the Tibetan people’s peaceful uprising of 1959 against Communist China’s repression in the Tibetan capital Lhasa, and the third anniversary of the non-violent demonstrations that took place across Tibet in 2008. On this occasion, I would like to pay tribute to and pray for those brave men and women who sacrificed their lives for the just cause of Tibet. I express my solidarity with those who continue to suffer repression and pray for the well-being of all sentient beings.

For more than sixty years, Tibetans, despite being deprived of freedom and living in fear and insecurity, have been able to maintain their unique Tibetan identity and cultural values. More consequentially, successive new generations, who have no experience of free Tibet, have courageously taken responsibility in advancing the cause of Tibet. This is admirable, for they exemplify the strength of Tibetan resilience.

This Earth belongs to humanity and the People’s Republic of China (PRC) belongs to its 1.3 billion citizens, who have the right to know the truth about the state of affairs in their country and the world at large. If citizens are fully informed, they have the ability to distinguish right from wrong. Censorship and the restriction of information violate basic human decency. For instance, China’s leaders consider the communist ideology and its policies to be correct. If this were so, these policies should be made public with confidence and open to scrutiny. END_OF_DOCUMENT_TOKEN_TO_BE_REPLACED 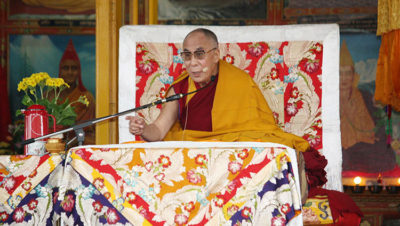 His Holiness the Dalai Lama remarking on his retirement from political responsibilities during a public teaching at the Main Tibetan Temple in Dharamsala, HP, India on March 19, 2011. (Photo by Tenzin Choejor/OHHDL)

After coming into exile, I have made sincere efforts to establish a democratic system of governance in the last more than 30 years. The Tibetans in exile say “our democracy is a gift from His Holiness the Dalai Lama.” Ten years ago, the system of electing Kalon Tripa through democratic elections was introduced rather than nomination of the candidate by the Dalai Lama, which was not correct. Since the direct election of Kalon Tripa, the system of the institution of Gaden Phodrang of the Dalai Lama as both the spiritual and temporal authority has ended. Since then I described myself as in semi-retired position.

Since then ten years have passed and the day will come for us when we have to follow a meaningful democratic system. The rule by kings and religious figures is outdated. We have to follow the trend of the free world which is that of democracy. For example in India, besides its huge population and diverse languages, religions and culture, but on the whole it remains very stable. This is because of democracy, the rule of law, free expression and media.  To the contrary, China under the authoritarian rule is always facing problems. It was mentioned in a recent Chinese government’s document that it is allocating more budget to maintain internal stability than national defense. This shows that they have more enemies inside rather than outside, which is a matter of shame. END_OF_DOCUMENT_TOKEN_TO_BE_REPLACED 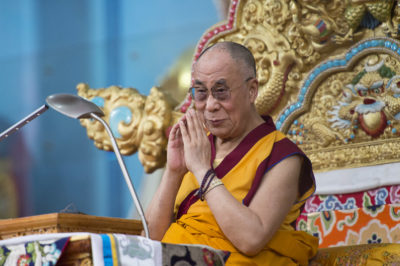 His Holiness the Dalai Lama: I wish to devolve authority solely for the benefit of the Tibetan people in the long run.

To the members of the Fourteenth Assembly of the Tibetan People’s Deputies,

It is common knowledge that ancient Tibet, consisting of three provinces (Cholkha-sum) was ruled by a line of forty-two Tibetan kings beginning with Nyatri Tsenpo (127 BCE), and ending with Tri Ralpachen (838 CE). Their rule spanned almost one thousand years. During that time, Tibet was known throughout Inner Asia as a powerful nation, comparable in military power and political influence with Mongolia and China. With the development of Tibetan literature, the richness and breadth of the religion and culture of Tibet meant that its civilisation was considered second only to that of India.

Following the fragmentation of central authority in the 9th century, Tibet was governed by several rulers whose authority was limited to their respective fiefdoms. Tibetan unity weakened with the passage of time. In the early 13th century, both China and Tibet came under the control of Genghis Khan. Although Drogon Choegyal Phagpa restored the sovereignty of Tibet in the 1260s, and his rule extended across the three provinces, the frequent change of rulers under the Phagmo Drupas, Rinpungpas and Tsangpas over the next 380 years or so resulted in a failure to maintain a unified Tibet. The absence of any central authority and frequent internal conflicts caused Tibet’s political power to decline. END_OF_DOCUMENT_TOKEN_TO_BE_REPLACED 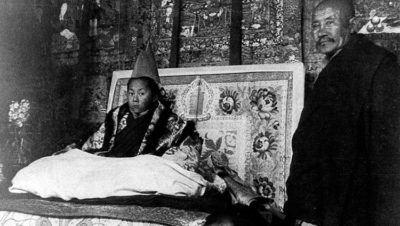 His Holiness sitting on the throne during his official enthronement ceremony in Lhasa, Tibet on February 22, 1940. (Photo/OHHDL)

My fellow Tibetans, both in and outside Tibet, all those who follow the Tibetan Buddhist tradition, and everyone who has a connection to Tibet and Tibetans: due to the foresight of our ancient kings, ministers and scholar-adepts, the complete teaching of the Buddha, comprising the scriptural and experiential teachings of the Three Vehicles and the Four Sets of Tantra and their related subjects and disciplines flourished widely in the Land of Snow. Tibet has served as a source of Buddhist and related cultural traditions for the world. In particular, it has contributed significantly to the happiness of countless beings in Asia, including those in China, Tibet and Mongolia.

In the course of upholding the Buddhist tradition in Tibet, we evolved a unique Tibetan tradition of recognizing the reincarnations of scholar-adepts that has been of immense help to both the Dharma and sentient beings, particularly to the monastic community.

Since the omniscient Gedun Gyatso was recognized and confirmed as the reincarnation of Gedun Drub in the fifteenth century and the Gaden Phodrang Labrang (the Dalai Lama’s institution) was established, successive reincarnations have been recognized. The third in the line, Sonam Gyatso, was given the title of the Dalai Lama. The Fifth Dalai Lama, Ngawang Lobsang Gyatso, established the Gaden Phodrang Government in 1642, becoming the spiritual and political head of Tibet. For more than 600 years since Gedun Drub, a series of unmistaken reincarnations has been recognised in the lineage of the Dalai Lama.  END_OF_DOCUMENT_TOKEN_TO_BE_REPLACED 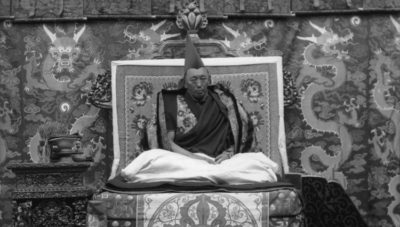 The First Dalai Lama, Gedun Drupa, was born in 1391 in Gyurmey Rupa, near Sakya in the Tsang region of central Tibet to Gonpo Dorjee and Jomo Namkha Kyi, a nomadic family. His given name was Pema Dorjee.

He did his primary studies of reading and writing Tibetan script with Gya-Ton Tsenda Pa-La, and then at the age of fourteen, he took his novice vows from Khenchen Drupa Sherab, abbot of Narthang monastery, who gave him the religious name of Gedun Drupa. Latter, in the year 1411, he took the Gelong vows (full ordination) from the abbot.

The First Dalai Lama, Gedun Drupa was a great person of immense scholarship, famous for combining study and practice, and wrote more than eight voluminous books on his insight into the Buddha’s teachings and philosophy. In 1474, at the age of eighty-four, he died while in meditation at Tashi Lhunpo monastery.