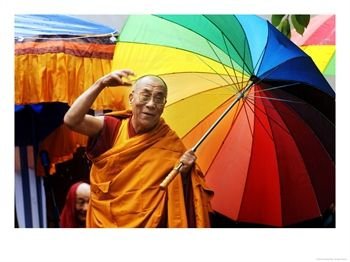 His Holiness the Dalai Lama: However, the Madhyamaka understanding of emptiness in terms of absence of inherent existence is more profound and comprehensive because it leaves no scope left for grasping.

Following this morning’s Avalokiteshvara initiation, this afternoon we’re going to discuss the sadhana practice of this deity according to the action class of tantra.

First, however, I’d like to give a brief introduction to the short lam-rim text, Lama Tsongkhapa’s Three Principal Aspects of the Path.

The three principal aspects of the path are renunciation, the awakening mind (bodhicitta), and perfect understanding of emptiness and their importance has to be understood in terms of the true meaning of Dharma in the context of Buddhism.

When we speak of Dharma here we’re referring to nirvana, liberation from cyclic existence, or perfect goodness. Therefore, in order to enter the Buddhist path, we first need to cultivate true renunciation, and this can arise only on the basis of a deep understanding of the nature of suffering—not just the obvious, manifest sufferings we experience but also the suffering of change and, in particular, the suffering of pervasive conditioning.

Furthermore, the courage of a practice motivated by bodhicitta is infinite and similarly most powerful in accumulating the vast stores of merit we need. Thus the second principal aspect of the path is the awakening mind, bodhicitta.

There are different ways of identifying the various classes of Vajrayana. For example, the Vajra Tent Tantra mentions four classes of tantra: action, performance, yoga and highest yoga. Other tantras offer different classifications. But at the heart of them all is the notion of the indivisibility of method and wisdom.

So what is it that makes this indivisibility possible in tantra? It’s possible because of deity yoga practice, where we first meditate on and dissolve everything into emptiness. Then, from within emptiness, we visualize that the very mind that realizes emptiness arises in the form of the meditation deity, and take that enlightened being as the focus of our meditation and reflect upon its emptiness.

Because the basis of emptiness that we meditate upon here is not an ordinary object, like an ordinary person, but rather an enlightened being—the meditation deity—it is therefore a unique, special object and because of that has a much more enduring quality. So when we realize the emptiness of that enlightened deity we have the perfect indivisible union of method and wisdom within a single cognitive event; our visualization [clear appearance] of the deity is the method aspect of the path and, within that same mental event, our apprehension, or cognition, of the emptiness of that deity is the wisdom aspect. So both method and wisdom are indivisibly present in a single mental event. This is what makes indivisibility possible in tantra.

In the practice of action tantra, external rituals and the conduct of the practitioner are also very important, therefore the texts emphasize personal cleanliness, diet and certain other lifestyle observations and so forth.

The Preliminary Practices
[The commentary which follows makes reference to the sadhana (practice), which is included below.]

In the Supplication to the Lineage Gurus, verse 11 reads,

I supplicate the ocean of different emanations of the Supreme Arya,
Universally appearing as environments and inhabitants,
Apparitions of analytic wisdom and compassion,
Unified with an all-pervading nature, primordially pure.

This refers to the understanding of emptiness I mentioned earlier, but here emptiness is described in terms of two primary characteristics: all-pervading nature and primordial purity. All-pervading suggests that emptiness is not the reality of just some phenomena but rather is all-encompassing; it pervades all phenomena. Therefore it is not a partial negation of some postulated entities.

Similarly, emptiness is primordially pure because it relates to the emptiness of inherent existence of all phenomena, and this invokes a passage in a text where Maitreya says that there is nothing to be cleared or dispelled or to be posited or postulated; rather one must develop the view that is the perfect reality as it is. In other words, the experience of emptiness does not negate something that existed before that is somehow mentally constructed, neither is the perfect nature of reality something that has been newly placed upon phenomena—rather, realization of perfect reality, emptiness, is a recognition of the true nature of things as they are.

This ultimate nature of reality, dharmata, can be understood in terms of either the Yogachara teaching as found in the Samdhinirmochana Sutra or the Madhyamaka understanding of emptiness according to the second turning of the wheel, the perfection of wisdom.

The Yogachara interpretation of suchness, the ultimate nature of reality, asserts a non-duality of subject and object where the objective existence of external world is negated, an understanding that can be very powerful in overcoming strong afflictions such as grasping at and clinging to external objects. Recognizing the external world as a projection or extension of our own mind automatically diminishes grasping at and clinging to it as objectively real.

However, the Madhyamaka understanding of emptiness in terms of absence of inherent existence is more profound and comprehensive because it leaves no scope left for grasping. While [the Yogachara understanding of] the non-duality of subject and object may negate the objectivity of the external world, it still leaves room for grasping at internal experiences such as feelings, sensations, mental states and so forth; realizing emptiness in terms of absence of inherent existence leaves no scope at all for grasping at either the external world or the internal world of experience. Therefore the Tibetan tradition recognizes the Madhyamaka understanding of emptiness as the most profound.

So this stanza basically summarizes the essence of the practice of a Vajrayana sadhana:

Apparitions of analytic wisdom and compassion,
Unified with an all-pervading nature, primordially pure.

We find similar ideas—compassion as the natural expression of the clear light mind—in the Vajrayana rituals of the Nyingma school, the early translation texts: the buddha’s form body—particularly the sambhogakaya, the buddha body of perfect resources—is the compassionate expression of the union of wisdom and its object, emptiness. Furthermore, it can manifest as the entire assembly of all the deities of the mandala. Thus we read,

I supplicate the ocean of different emanations of the Supreme Arya,
Universally appearing as environments and inhabitants.

This means that Avalokiteshvara, the resultant state to which we aspire, is in fact the embodiment of the four buddha kayas—the two dharmakayas and the two rupakayas. His primordially pure nature is the natural dharmakaya [svabhavakaya]; the wisdom that is unified with that is the wisdom dharmakaya; the compassionate expression of this union in a physical embodiment is the sambhogakaya; and this then manifests as the entire assembly of the mandala [nirmanakaya]. Since the goal to which we aspire is the attainment of these four buddha bodies, the path that leads to this resultant state must have characteristics that resemble or correspond to it.

So from this point on the actual heart of the sadhana practice according to action tantra is explained.

Basically, the heart of action tantra sadhana practice consists of two main practices, the yoga with signs and the yoga without signs, and this differentiation of the presence or absence of signs is not based on whether or not there is a realization of emptiness but on the way that emptiness is experienced.

As I just mentioned, the heart of action tantra deity yoga meditation is explained in six stages referred to as the six deities and begins with meditation on emptiness—a clear indication that an understanding of emptiness is indispensable in Vajrayana practice.

His Holiness’s commentary was transcribed by Ly Bui, Lan Bui, San Bui and Nicholas Ribush and edited by the latter.