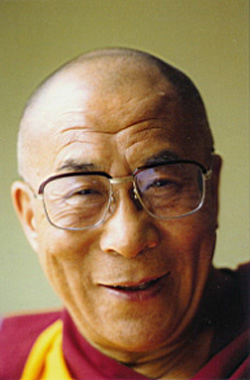 His Holiness the Dalai Lama: practice must be based upon meditation on bodhicitta and emptiness.

Here we read, “Contemplating as follows is the ultimate deity,” which is followed by the mantra OM SVABHAVA SHUDDAH SARVA DHARMA SVABHAVA SHUDDHO HAM.

We use Sanskrit here partly to receive inspiration and the blessings of the mantra but it also captures the meditation on emptiness.

Then we see SARVA DHARMA, which means all phenomena. Here it refers in particular to the physical and mental aggregates upon which the concept of person is constructed and includes all phenomena in both samsara and nirvana. Again, SVABHAVA means their nature and SHUDDHO their purity, while HAM connotes the need to place our mind single-pointedly upon the realization of emptiness of both person and phenomena.

This fusion of our mind with the emptiness of person and phenomena refers to an experience where all conceptual elaborations have come to an end, or been dissolved, similar to what the Seventh Dalai Lama described in a poem, where he said that just as clouds arise and dissolve in the vast expanse of the sky, similarly, when subject—the mind—and object—dharmata, ultimate reality—fuse, within that experience, all duality and conceptual elaborations dissolve.

The text continues, “The nature of myself, the deity to be meditated upon, and all phenomena are in essence of one taste of emptiness.”

“One taste of emptiness” refers to the dissolution of dualistic perceptions of all phenomena—just as the meditator is devoid of inherent existence, so too is the object of meditation, Avalokiteshvara. It is said that as far as buddha nature is concerned, there’s no difference between a sentient being and an enlightened buddha, so here, similarly, as far as emptiness is concerned, there’s no difference between the meditator and the object of meditation. In this way we meditate upon the emptiness of all phenomena but particularly upon the emptiness of our own self.

Here the text reads, “From the sphere of emptiness, the aspect of the tone of the mantra, OM MANI PADME HUM, resounds, pervading the realm of space.”

This refers to the second stage of the deity yoga meditation, where out of our experience of emptiness there arises not letters but a sound, which we can call the resonance of emptiness. So this sound, OM MANI PADME HUM, resounds from within the state of emptiness.

The third stage of the deity yoga meditation is the deity of letters, or syllables, and here we read, “My mind, in the aspect…grains of gold.”

Next is the deity of form, where we read, “The (syllables) transform into…of the hell and other realms.” This describes the fulfillment of the two purposes, making offerings to the enlightened beings, such as Avalokiteshvara, and bringing about the welfare of other sentient beings.

As I explained before, sadhana practice must be based upon meditation on bodhicitta and emptiness. So at this point, when we emanate light and make offerings to all the buddhas and bodhisattvas, we can offer our own spiritual practice, which is the highest of offerings; if we have done some meditation on bodhicitta and emptiness, we actually have something to offer that will really please the buddhas and bodhisattvas and gain their approval.

Similarly, although at this point we may not have had a genuine experience of bodhicitta or attained buddhahood and are therefore not fully able to bring about the welfare of other sentient beings, at least on the level of imagination we can mimic the activities of the buddha in bringing about others’ welfare. Therefore, if our sadhana practice is based upon meditation on bodhicitta and emptiness, when we recite this section and reflect upon fulfilling the two purposes, there’s some substantive meaning to that meditation. If our practice is not properly grounded it remains on the level of mere words.

On the basis of fulfilling the two purposes of making offerings to the buddhas and bringing about others’ welfare, we now arise in the full form of Avalokiteshvara, with one thousand arms and so forth, as described in the sadhana.

This involves first invoking and absorbing the wisdom beings, then invoking and making offerings to the five buddha families, and finally requesting the empowerment. Then the empowering deities dissolve into us, crowning our head with the lord of [Avalokiteshvara’s] buddha family, [Amitabha].

Now let’s take another look at supplication verse 14, which mentions these six deities:

Please bless me to eliminate ordinary appearance and grasping,
With the clear appearance and divine pride of the six deities:
The deity of thusness, the tone of the mantra’s empty resonance, the seed syllable,
The form complete with marks and exemplifications, the commitment mudra and sign.

If we are able to maintain as the foundation of our practice both bodhicitta and a deep understanding of emptiness and, on that basis, constantly engage in the deity yoga meditation of cultivating the divine perception and the enlightened identity of ourself as a deity and gain deep realization of that, then, as Lama Tsongkhapa says, all our activities—physical, verbal and mental—are transformed such that we accumulate great stores of merit.

This is very true. The key practice of deity yoga meditation is cultivation of divine perception and identity, which we have to maintain not only during the meditation session but in between sessions as well. If we can, everything we do with our body, speech and mind will create a vast amount of merit. This shows the unique and distinctive qualities of the Vajrayana approach.

Then, as we read in supplication verse 15, the main practice of cultivation of divine identity and perception is followed by subsidiary practices:

Please bless me to accomplish each and every common attainment
Through dependence on the concentration with four-branched repetition.

The last two lines of this verse read,

And to complete perfect concentration
With the yogas of absorption in fire and sound.

“Yogas of absorption in fire and sound” refers to the unique approach of action tantra where we cultivate tranquil abiding on the basis of deity yoga meditation, which also enables us to accumulate great stores of merit very quickly.

The next stanza concerns the union of tranquil abiding and penetrative insight based on deity yoga:

Please bless me to uproot the two obscurations
With the great space-like concentration
Bestowing immaculate liberation that destroys all trust in grasping at signs
And by being endowed with a myriad of merits of skillful means.

In the context of deity yoga, the union of tranquil abiding and penetrative insight refers to a total fusion of our mind with emptiness.

So, with this, I have explained the heart of the sadhana’s deity yoga practice. With respect to the actual meditation, each session begins with instantaneous dissolution into emptiness, which serves to remind us that every moment of the Vajrayana practitioner’s day to day life has to be permeated by the deity yoga practice of viewing everything in the light of divine appearance and identity—clear appearance of ourself as the deity and strong conviction that this is who we are. Therefore, the first thing we have to do when we get up in the morning is to remind ourself to cultivate enlightened appearance and apprehension—so we dissolve everything into emptiness and arise as the deity from within it.

The sadhana practice of offering also involves first dissolving the materials we’re going to offer into emptiness, regenerating them from within it, and then consecrating and blessing them before making the offering because, as beginners, our attachment to ordinary objects is very strong. Therefore we need to go through this process first.

The materials we offer in the sadhanas—water for drinking, water for washing the feet, flowers, incense and so forth—are probably based on the ancient cultural traditions of India. So, dissolve the offerings into emptiness, regenerate them from within emptiness, bless and then offer them.

Offering is followed by praise.

The actual meditation is what I explained before, the cultivation of divine perception and identity, but, as many sadhana manuals state, when we’ve done this for a while and become tired, we should engage in the repetition of the mantra. Normally in retreat we focus on mantra repetition and ignore the key practice, the heart meditations of deity yoga, and so when we get tired our only option is to end the session.

If you look at the sadhana you’ll see that first there’s the long Avalokiteshvara mantra, NAMO RATNA TRAYAYA NAMAH ARYA JNANA SAGARA…and so on, all the way to the end, CITI JVALAM APANAYE SVAHA.

The second part of this, TADYATHA OM DHARA DHARA DHIRI DHIRI DHURU DHURU…SVAHA is considered the short version of the long one and normally when we do Avalokiteshvara retreat, we recite this one 10,000 times.

However, if we retreat on the basis of the six-syllable mantra, OM MANI PADME HUM, we do 100,000 repetitions for each syllable, 600,000 all together. http://www.lamayeshe.com/index.php?sect=article&id=422