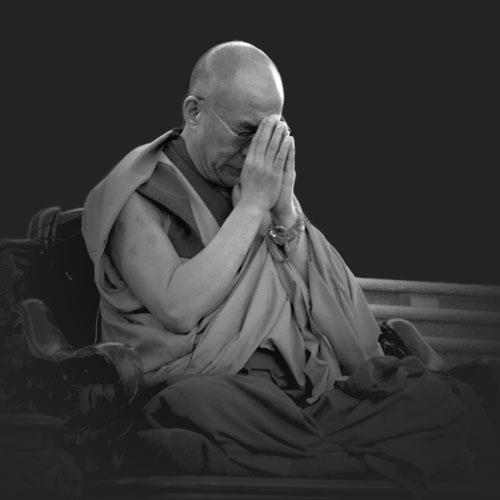 His Holiness the Dalai Lama: (…) The problem with Dolgyal practice is that it presents the spirit Dolgyal (Shugden) as a Dharma protector and what’s more tends to promote the spirit as more important than the Buddha himself. If this trend goes unchecked, and innocent people become seduced by cult-like practices of this kind, the danger is that the rich tradition of Tibetan Buddhism may degenerate into the mere propitiation of spirits.

Following long and careful investigations, His Holiness the Dalai Lama strongly discourages Tibetan Buddhists from propitiating the fierce spirit known as Dolgyal (Shugden). Although he once practised Dolgyal propitiation himself, His Holiness renounced the practice in 1975 after discovering the profound historical, social and religious problems associated with it. He did so with the full knowledge and support of his junior tutor, the late Kyabje Trichang Rinpoche through whom His Holiness first became associated with the practice. Even within the Geluk and Sakya schools – the Tibetan Buddhist traditions to which majority of Dolgyal practitioners belong – the propitiation of this spirit has been controversial throughout its history. Historical investigation reveals that Dolgyal practice, which has strong sectarian overtones, has a history of contributing to a climate of sectarian disharmony in various parts of Tibet, and between various Tibetan communities. Therefore, from 1975 onwards, His Holiness has regularly made public his view that this practice is inadvisable, based on the following three reasons:

1. The danger of Tibetan Buddhism degenerating into a form of spirit worship: Tibetan Buddhism originally evolved from the authentic and ancient tradition upheld at the great Indian monastic university of Nalanda, a tradition that His Holiness often describes as a complete form of Buddhism. It embodies the original teaching of the Buddha as developed through the rich philosophical, psychological and spiritual insights of such great Buddhist masters as Nagarjuna, Asanga, Vasubandhu, Dignaga and Dharamakirti. Since the great philosopher and logician Shantarakshita was instrumental in establishing Buddhism in Tibet in its earliest stages in the 8th century, philosophical enquiry and critical analysis have always been important hallmarks of Tibetan Buddhism. The problem with Dolgyal practice is that it presents the spirit Dolgyal (Shugden) as a Dharma protector and what’s more tends to promote the spirit as more important than the Buddha himself. If this trend goes unchecked, and innocent people become seduced by cult-like practices of this kind, the danger is that the rich tradition of Tibetan Buddhism may degenerate into the mere propitiation of spirits.

2. Obstacles to the emergence of genuine non-sectarianism: His Holiness has often stated that one of his most important commitments is the promotion of inter-religious understanding and harmony. As part of this endeavour, His Holiness is committed to encouraging non-sectarianism in all schools of Tibetan Buddhism. In this His Holiness is following the example set by his predecessors, especially the Fifth Dalai Lama and the Thirteenth Dalai Lama. Not only is a non-sectarian approach mutually enriching for all Tibetan Buddhist schools, but it is also the best safeguard against a rise of sectarianism that could have damaging consequences for the Tibetan tradition as a whole. Given the acknowledged link between Dolgyal worship and sectarianism, this particular practice remains a fundamental obstacle to fostering a genuine non-sectarian spirit within the Tibetan Buddhist tradition.

3. Especially inappropriate in relation to the well-being of Tibetan society: Propitiating Dolgyal is particularly troublesome, given the Tibetan people’s present difficult circumstances. Textual and historical research demonstrates that the spirit Dolgyal arose out of hostility to the great Fifth Dalai Lama and his government. The Fifth Dalai Lama, who assumed both the spiritual and temporal leadership of Tibet in the 17th century, personally denounced Dolgyal as a malevolent spirit that arose out of misguided intentions and is detrimental to the welfare of beings in general and the Tibetan government headed by the Dalai Lamas in particular. The Thirteenth Dalai Lama and other respected Tibetan spiritual masters have also spoken out strongly against this practice. Therefore, in the current Tibetan context, in which unity among the Tibetan people is vitally important, engaging in this controversial and divisive propitiatory practice is inappropriate.

His Holiness has strongly urged his followers to consider carefully the problems of Dolgyal practice on the basis of these three reasons and to act accordingly. He has stated that, as a Buddhist leader with a special concern for the Tibetan people, it is his responsibility to speak out against the damaging consequences of this kind of spirit worship. Whether or not his advice is heeded, His Holiness has made clear, is a matter for the individual. However, since he personally feels strongly about how negative this practice is, he has requested those who continue to propitiate Dolgyal not to attend his formal religious teachings, which traditionally require the establishment of a teacher-disciple relationship.