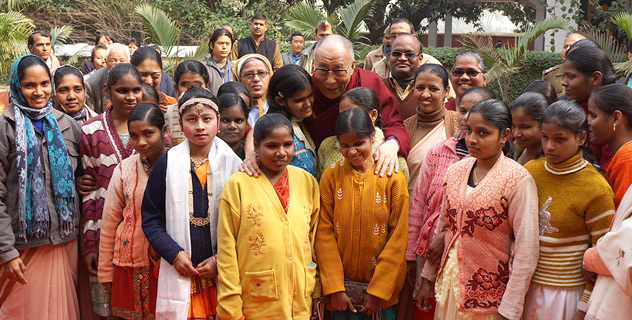 His Holiness the Dalai Lama: ”Patience protects that which is most precious in the world from the dangers of anger”.

Seventh part of His Holiness the Dalai Lama’s teachings Nov. 30 – Dec. 13, 2012 on the 18 Great Stages of the Path (Lam Rim) Commentaries at Gaden and Drepung Monasteries in Mundgod, India, see http://www.jangchuplamrim.org/ and video here http://www.dalailama.com/ Translated from Tibetan into English by Lotsava Tenzin Tsepag. Trascript by Dr. Peter Lawrence-Roberts, first revision and editing by Dr. Luciano Villa within the project “Free Dalai Lama’s Teachings” for the benefit of all sentient beings. We apologize for any possible errors and omissions.

(Most of the day was taken up with ritual practices such as H.H. Dalai Lama’s Praise to the 17 Nalanda Masters https://www.sangye.it/wordpress2/?p=2147 , the Long Life Puja for His Holiness and Generating Bodhicitta.)

The highway that leads one to Buddhahood is bodhicitta. Bodhicitta can be obtained by us through training. Buddha found a human body to train in this way and his disciples did the same. We have found a human body like Buddha Shakyamuni, Nagarjuna, Asanga and others. We have also met with the Dharma. So we have all right facilities and circumstances to generate bodhicitta. His Holiness makes an earnest determination to generate bodhicitta on a daily basis.

Imagine Buddha Shakyamuni in person and also all the great bodhisattvas – Maitreya, Nagarjuna, Aryadeva, Chandrakirti, Shantideva, Shantarakshita, Dignaga, Dharmakirti etc and all the great Nalanda masters who upheld the Buddhadharma for centuries. Also, during the revival of Buddhism in Tibet there is Atisha and all the masters of the Indian tradition. Also the great Mahasiddhas – Tilopa, Naropa etc. Also the Kadam masters, the five patriarchs of the Sakya lineage, the Kagyu masters of the four main and eight minor lineages. Then, in the new Kadam tradition, Lama Tsong Khapa. We should then imagine our own masters with whom we have a direct Dharma connection. Also the great bodhisattvas in the bodhisattva grounds. We should think too of all the sentient beings who do not want suffering but who unwittingly run after it. They actually make their ‘practice’ the causes of suffering.

Our life is very uncertain so we should do what we can to make life meaningful. We should imagine all six realms of sentient beings and see them undergoing so much suffering. We then feel great kindness towards them.

We should train our mind in bodhicitta in stages. So, whatever spiritual realisation we develop we need to know it, understand its meaning and give thought to it. This way we will gain certitude in it. Then we reach a stage where we can develop the experience of bodhicitta within ourselves. If this feeling is within us then we can feel compassion. When we further train by accumulating merit and purifying negativities then the experience will come to us rather effortlessly.

We should know first the benefits, the great qualities of bodhicitta. Then we can set our mind on it and develop the experience of it. If we are totally dedicated to the well being of all sentient beings there is no reason to feel fear or anxiety. Most sources of fear and anxiety come from our interaction with other sentient beings. If we feel anger or jealousy, if we bully or deceive people, then we will feel anxiety or fear concerning those people. If we don’t generate love and compassion for all sentient beings then we can fall back into self-centredness. We are voluntarily creating the causes for suffering.

The Buddhas and bodhisattvas become a refuge for us precisely because they have cultivated bodhicitta for all sentient beings. Bodhicitta is at the root of all their accomplishments up to Buddhahood.

We should think of our vow to generate bodhicitta when we feel we are getting angry or feel some other negative emotion. That way it starts to work within us. If all we do is say the words of the vow this is of little benefit.

His Holiness wrote the Prayer to the 17 Nalanda Masters, see https://www.sangye.it/wordpress2/?p=2147, as he is so inspired by their writings.

The Six Perfections are a summary of the entire bodhisattva path. All the precepts are included within the Six Perfections. We need to gain conviction in them as they give us the complete method for demonstrating bodhisattva deeds. They can help us pursue our own aims and the aims of others.

We need to develop a mind that can remain focussed on a single object for as long as we wish. We need to make joyful effort to achieve this. It will certainly not happen by itself.

It is wrong to get angry at fire because it is hot and burns. It is in the nature of fire to do these things. We can often rationalise anger in this way. If I am hit with a stick do I get angry with the stick or the one who wields it? Rather it is better to be angry at hostility which gives rise to angry action in the first place. We should seek to conquer this through bodhisattva deeds. If we develop a mind of hostility and retaliate with violence then the violence will escalate and there will be no end of it. Much negative karma can be generated in this way. The reasoning such as this set out in Lamrim Chenmo are all very logical and evident. As we consider them we can develop faith and reliance on the text.

Atisha is seen in the lineage as one of the ornaments of the world according to Lama Tsong Khapa. When he wrote this the true extent of the world was not known and Buddhism was confined to a small area. But now people are taking an interest in Buddhism all over the world, so Atisha http://www.sangye.it/altro/?cat=14 is truly an ‘ornament of the world’.

Dependent origination is without doubt the most effective way to teach people am understanding of the true nature of reality. Atisha both practiced and taught this.

The Buddha showed the path as he had seen and experienced it. So if we follow him we can achieve our goals. He became a Buddha for the sake of all sentient beings so he taught in all kinds of ways so as to bring benefit to all.

In the Kadam tradition Ka refers to the words of the Buddha and Dam refers to the instructions for beings of all three capacities. The Kadam lineage was the lineage of Atisha. By following these teachings we will cultivate the desire to be free of samsara. We then realise that all other sentient beings are trapped in samsara and we develop the desire to liberate them also.

The teachings on the Three Trainings lead us out of samsara. When we think of liberating others it leads us to the high state of Buddhahood or enlightenment.

After Atisha’s text, Lama Tsong Khapa http://www.sangye.it/altro/?cat=22 wrote his great Lamrim Chenmo and other Lam Rim texts. Next came the text of the Third Dalai Lama, Essence of Superfine Gold http://www.sangye.it/altro/?p=1036, and then that of the Fifth Dalai Lama. The Southern lineage Lam Rim followed that. Then came Yeshe Tsondu’s Essence of Nectar (Lam-rim-bdud-rtzi snying-po) a very good text for daily study and meditation. Then followed Zhamar Pandita’s texts, who was the tutor to the Thirteenth Dalai Lama. This is a brief text, but hugely beneficial. Then came Trijang Rinpoche’s commentary on Pabongka Rinpoche’s Liberation in the Palm of Your Hand.

Those who are angry actually forsake the thought of benefiting others. Practising patience should not depend on the good behaviour of others, nor on us changing their behaviour.

Patience protects that which is most precious in the world from the dangers of anger. We should meditate on patience until we develop a strong certainty in its merits.

In Chandrakirti’s Commentary on the Middle Way he says that anger directed at anyone can destroy the root of virtue within us. It would be far worse if the person towards whom our anger is directed is a bodhisattva. However, since we don’t know who is a bodhisattva we should assume that all sentient beings are bodhisattvas and not direct anger towards them.

The destruction of the seeds of anger does not mean just suppressing or postponing them. We need to root them out altogether. However, practicing patience will ensure that these seeds do not ripen and thereby cause the karmic causes for a lower rebirth.

If we are lazy we will lack all good qualities. We need to cultivate joyous effort.

We can be discouraged by how long development appears to take if we are on the Tantric path, which makes it possible to achieve enlightenment in one lifetime. We may take this to mean that we are lazy. But we cannot be lazy if we are applying joyous effort in working for the benefit of others.

Shantideva’s http://www.sangye.it/altro/?cat=15 text is complete, easy to understand, and very helpful in the development of joyous effort.

We can suffer the laziness of procrastination, claiming we have plenty of time, and the laziness of indolence which comes from attachment and the cultivation of the temporary joys of samsaric activities.

We should contemplate that this life we have is rapidly disintegrating and there really is very little time. We see the sublime teaching as the source of greatest joy in this and future lives. If we contemplate this then we will work hard and not feel that we have plenty of time.

If we suffer with self-contempt it is not enough to simply rely on the teachings. We must become a Mahayana practitioner. If the goal of Buddhahood is so difficult to obtain we may feel that we are simply not good enough. We must root this feeling out as it constitutes giving up our goal of enlightenment. The text says that even flies will eventually achieve enlightenment, so how much more opportunity do we have with a precious human birth to develop the causes for enlightenment. We must cultivate perseverance and not give up bodhisattva deeds. In the past, all those who have worked hard have attained complete enlightenment. This will be true for all in the future too, including for us. In the past, some who have been on the verge of Buddhahood have fallen back into a much lower condition, but they have stayed on the path and eventually achieved the goal. We can do the same if we tirelessly pursue perfect Buddha qualities.

We will never ‘give away’ our body so long as we perceive it and are attached to it.

We should not be discouraged if we remain for a long time in cyclic existence. So long as we are happy and have favourable conditions this is not a problem. Bodhisattvas choose to stay in samsara for a long time so as to help others. We should not focus on the length of time but rather on developing good qualities for the benefit of all sentient beings.

We may be moved by the spirit of compassion and yet be discouraged by the amount of work needed before we can truly help others. If we feel this we are in danger of giving up on the spirit of enlightenment. Both Nagarjuna and Asanga made clear that this is a very long path. To be discouraged because it is not quick is wrong.