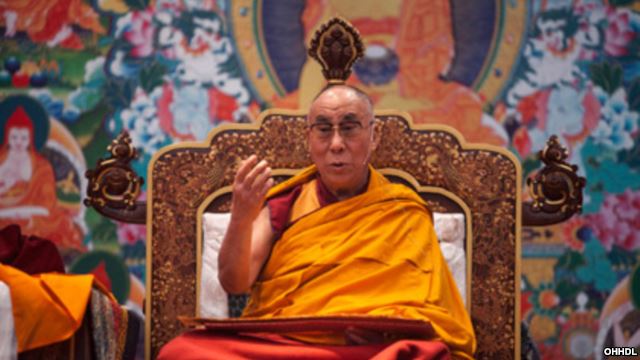 His Holiness the Dalai Lama: The Buddha is the teacher of selflessness.

His Holiness the Dalai Lama’s continues https://www.sangye.it/wordpress2/?cat=73 teachings December 25, 2013 – January 4, 2014 on the 18 Great Stages of the Path (Lam Rim) Commentaries, at Sera Monastery in Bylakuppe, Karnataka, India, see here http://www.dalailama.com/webcasts/post/308-18-great-stages-of-the-path-lam-rim-commentaries—2013 . Translated into English from Tibetan by Mr Tenzin Tsepag. Trascript by Eng. Alessandro Tenzin Villa, first revision and editing by Dr. Luciano Villa within the project “Free Dalai Lama’s Teachings” for the benefit of all sentient beings. We apologize for any possible errors and omissions.

Today in Sera Je Debate Courtyard both monastic and lay people have gathered here, spending a lot of money, despite of problems and difficulties you have taken interest and come here, and I would like to greed you all, thanks to your faith and devotion that you have come here. Since you have come here I’m very happy also.

Last year we started a guided teaching of Lamrim, we started with 8 great texts, and at the top of that we have added a number of others texts, making a number of 11 definitive texts, which I have received instruction and transmission. Last year we have already finished one text and now we have the text “The essence of refined gold”, and I will try to cover as many texts as possible. I don’t know if I can’t finish all the texts, and so, if I push myself too hard, I may hurt my eyes. So I will try my best to finish as many text as possible.

The aim to gather here today it’s to draw some benefits in this life, it’s to develop a way of thinking which is beneficial for yourself in this life. If you can do that, this is a guarantee to have a good life in the next. In the time of death, if you do a bad life, even if you may do some prayers and offerings, as butter lamp and so forth, it will be very difficult to help yourself. But, if you manage a meaningful life, now, you can be quite sure that you will have a better life in the next life. This is the reason we are gathering here for this dharma discourse. So, in the beginning we will say the verse of taking refuge and bodicitta, three times, together. The purpose of this recitation is, whatever Dharma discourse we are engaging, we need to have the right motivation, any action that we do with our body speech and mind, whether they become virtue or not, depends on our motivation. Externally we may appear to do some dharma practice. Make offering and so forth, but, if your motivation is intense with worldly concern, your practice doesn’t become a dharma practice. But with right motivation, with pure motivation whatever things you do, then it will become a Dharma practice.

We will do the Praise to Shakyamuni Buddha pag 4. and then the Lam Rim Prayer.

Whatever practice you do you in Dharma and specially in Mahayana, you need to develop the right motivation.

The Lama should teach you with pure motivation and then you, the audience, you should also develop the pure motivation to listen to the teaching. Taking refuge, and then the bodichitta: we should have this kind of motivation to take refuge. Listen to the teaching in this way will be effective. If my intention and motivation is wrong, then I will be accumulating non virtues and creating evil actions. So, from the side of the lama I need to be able to teach you in according with the tradition which come down from master Nagarjuna, master Tsonkg Khapa and so forth. And with this right type of motivation I will be able to do the right right teaching in the right way. And, from the part of the disciple, from the audience, you should also have the right motivation to listen to the teaching, for the right transformation in yourself, and in this way it will be effective. Otherwise if you just try making money, to become a teacher to somebody to make money, without the right motivation, that will create negative action.

So, in regard to any religious tradition, we have several practice of taking refuge. For instance, in the theistic religion, they take refuge in the god, the god creator. Also, the non-theistic ones have their founder teacher as well, and we can take refuge into the founder teacher. So, in regards to Buddhism, Chandrakirti has said that the Three Refuges – Buddha, Dharma and Sangha – are refuge for those who inspire to liberation. With regard to moksha or liberation, it isn’t something that we gains or believe in. It’s not a place that you reach, it is the elimination of all kinds of shortcoming, that are within our self-limitations. So, in other words, there are two level of moksha: the elimination of all the delusion, illusion/negative emotion and the elimination of all defilement from the one mind. In others words: both the obscurations.

So, the Buddha is the teacher of selflessness and then, with regard to the dharma, which comprises both path and cessation, once you attend these two within yourself, then you will be someone who has attained the two object of refuge within oneself: which is the realization of emptiness directly and also the realization, the attainment of cession within oneself. So, having realized both these, the cessation and emptiness in our self, we have realized great goals, which doesn’t take us to wealth or power, authority, but what, we as monastic, call the experience of virtue which tremble the eight worldly concern, totally focus on our body, speech and mind for liberation.

So, therefore, as it is said by Chandrakirti, Buddha, Dharma and Sangha are the refuge for those who inspire to liberation. So, if you take refuge, merely to get benefit for this life, then you die in this life and the effect is over. Also if you take refuge to get benefit in the next life, the effect will finish in the next life. Also if you take refuge with the intent to reach Nirvana, when you reach that goal, that is done. Here what we are talking about is taking refuge within the understanding the Mahayana path in order to reach complete Buddhahood for the benefit of all sentient beings. So, when you attain a state in which you have eliminated all delusions, all defilements from within your mind, then you reach the great enlightenment, the full enlightenment of Buddhahood.

When you say “I take refuge in Buddha, Dharma and Sangha until I will reach the enlightenment” you say that you take refuge until you reach the enlightenment, you do this in order to reach the final, ultimate cessation path, until you integrate within yourself, such as overcoming the shortcomings, so to progress in yourself further and further. And so, when we think about to benefit all sentient beings, you take refuge not only in the Buddha, who is able to benefit all sentient beings, but you also take refuge in the sense that you inspire to become a Buddha in the end: like Buddha Sakyamuni first generated bodhicitta, then engaged in the accumulation of the merit and wisdom, then became enlightened in this life. Also master Nagarjuna and so forth the Indian lineage and the master of Tibet, Tibetan Buddhist tradition Ghelu, Sakya, Nyma, Cargyu and Jonang, they all have engaged in the six perfections of the practice of bodhisattva. Also the tantric practices come under the bodhisattva practice. So, all these perfect masters have become enlightened through this practices or they are still practicing this practices. Therefore, when you say – In the supreme Buddha, Dharma and Sangha I take refuge till I will gain enlightenment for the benefit of all sentient being – this is the sense that you want to become enlightened for the benefit of all sentient being, then you take refuge to become enlightened and by the accumulation that you create through generosity and so forth.

So, when you see this prayer: “Trough accumulation of merits and so forth, may “I” become a Buddha to benefit all sentient beings” you come across the term “I”, you should bring in your mind that the self that you focus on the “I” doesn’t exist in the way that appears to you, as it has some kind of independent existent. And similarly: yourself, the Buddha, Dharma and Sangha and all the sentient beings and yourself are merely designated on the basis of the your aggregates. With this understanding of selflessness, when you say: “I take refuge until enlightenment in Buddha, Dharma and Sangha” you should have this idea in this mind: that this “I” doesn’t has any objective independent existence, that your “I” doesn’t merely exists. And similarly when you say: “May I became a Buddha for the benefit of all sentient beings” you should have the sense of lack of independent existence of yourself, of Buddha, Dharma and Sangha and also of sentient beings, also if you have generated bodhicitta in yourself. So, the profound view of Madhyamika or the Middle Way, by the understanding of what it says, you have to become familiar with it, you must be able to bring them into your practice.

So, by the accumulation of merits and wisdom that all of us have in mind, we say:

I take refuge until enlightenment in Buddha, Dharma and Sangha

By the accumulation I create trough generosity and so forth,

may I become a Buddha for the benefit of all sentient beings.

So this is calling of all god, goodness, non-gods and humans to come here and to listen these holy Dharma teachings which eliminates all the negatives emotions.

I give these teachings in the language of human, gods, asura, and so forth. I pay homage to the Gautamma, who for compassion gave these holy teachings for eliminating distorted views.

So, here people from many different countries have come to listen to this Lamrim Dharma teaching. Some of these countries are those who are traditional Buddhist and other who has not Buddhism as native tradition. So, there are ten different languages in which these teachings are translated and interpreted. The scope of our gathering here isn’t for some kind of a show, nor for entertainment, is not to make money. You had to spend money and you can’t gain money by coming to this teaching.