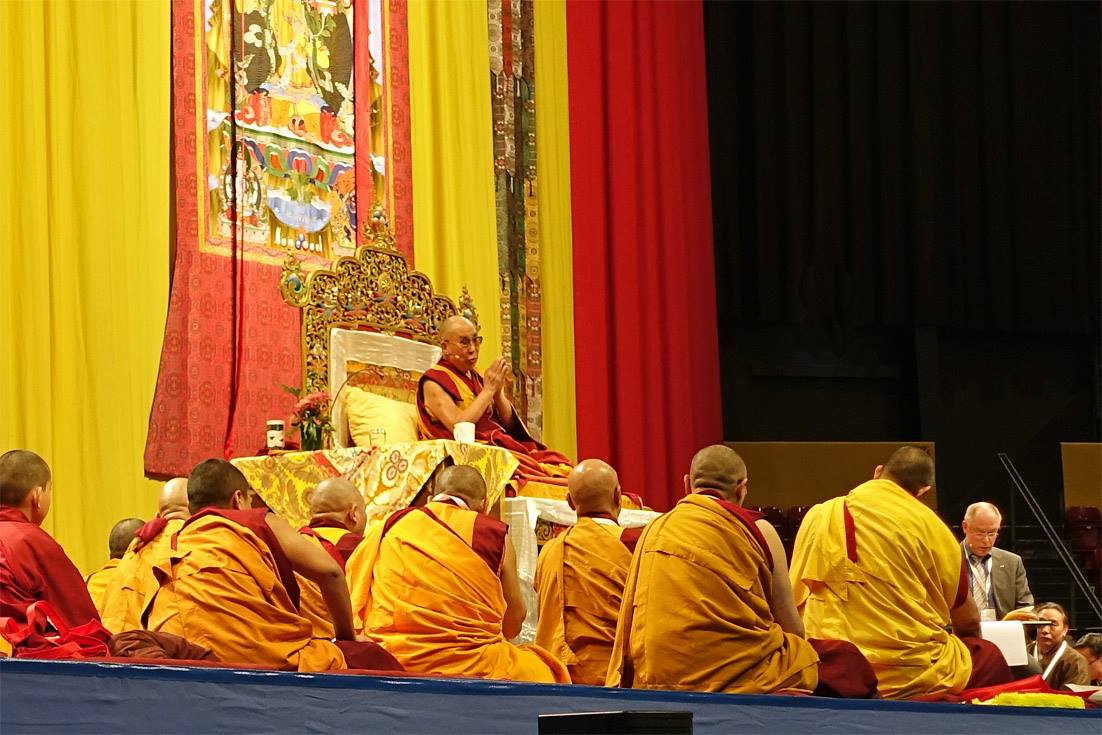 His Holiness the Dalai Lama: All the philosophy have the same purpose: to strengthen conviction about moral principles.

Second part of His Holiness the Dalai Lama’s teachings based on Nagarjuna’s Commentary on Bodhichitta (Bodhichittavivarana) and Geshe Langri Thangpa’s Eight Verses of Training the Mind in Basel, Switzerland, February 7-8, 2015. Translated from Tibetan into English by Mr Tenzin Tsepag. Trascript and notes by Dr. Luciano Villa, first revision and editing by Eng. Alessandro Tenzin Villa within the project “Free Dalai Lama’s Teachings” for the benefit of all sentient beings. We apologize for any possible errors and omissions.

In regard to religion tradition, most of the religious tradition are based on faith without doing very much critical analysis and investigation within the teachings.

So we don’t need to keep blind faith, but to analyze the Buddha teachings.

In Nagarjuna’s text, Bodhicitta Vivarana “A Commentary on the Awakening Mind”, joust at the beginning you have very challenging thing, which are quite difficult point and you must not be discouraged by the difficulty, but you should have the courage of studying.

Master Nagarjuna lived around 2nd century where you can find in his Mādhyamika works the concept of modern physic, and in Hearth Sutra you can find that everything in the universe is empty of its own nature.

Regarding the Quantum Physic, is rather new what was discovered in the 20° century, but in Nagarjuna texts (Nagarjuna lived in 2nd century a.D.) and in the Madiamika point of view we can find concepts of Quantum Physic. Also in the Paramita (The Perfection of Wisdom) teachings and in the Hearth Sutra you find mentioned that the form is empty, which can be applied to ourselves, and so everything is empty in the universe in also empty. And so this kind of investigation should come trough reasoning.

Aryadeva, in his “400 Verses, said: “Those who speculate on the teaching of the Buddha: to them emptiness should be taught”.

With regards to religion of the world, there are three aspects. First is the religious, then philosophical and cultural. Regarding the religious aspect, all the religion talks about love. Effectively you need the practice of love, tolerance, forgiveness and patience.

more helpful as our intelligence becomes more active. Joust one philosopher is too less.

create feel that you can use, love. The previous pope, the German pope, said : “You should have faith and reason going together”. Wonderful!

All the philosophy have the same purpose: to strengthen conviction about moral principles.

Therefore we should look at any aspect: cultural, social, philosophical.