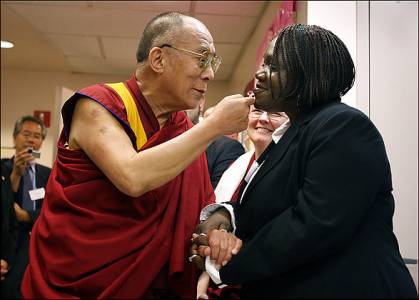 “We are same human beings, we all have the same good potential. It’s very important to realize that,” His Holiness told the circle of residents, who are part of a weekly meditation program at the N Street Shelter. Speaking to about 300 people that included residents, former residents, and shelter donors, His Holiness spoke about the benefits of compassion. Like the women of N Street, he said, “I myself am homeless.” His teaching took on a special relevance when he said, “The practice of compassion is of immense benefit.” Gesturing to a few rows filled with shelter residents, he noted, “Women are my Gurus.”

Several women said that they had benefited enormously from the shelter’s meditation program, which they said helped them make it possible to stay away from drugs and alcohol and maintain mental stability. “My insides were jumbled. I was living a life of chaos,” said a 49-year-old resident, who spent years on the streets before she came to the shelter. She stated that she has found strength through meditation and hopes to graduate from the meditation program that is being offered.

His Holiness spoke about vegetarianism, democracy, how to help the rural poor in India and China, and urged his listeners to find meaning in every physical touch, and to contemplate the sentience of all living beings. Laughing, he admitted that he has found himself pondering what mosquitoes must be thinking when he watches one of them biting him and sucking out his blood.

Volunteers and employees from the Washington Humane Society, the district’s only open-access animal shelter, and two dogs currently housed there were also in the audience. The Humane Society has a partnership with N Street Village, through which homeless women help train and care for discarded animals and prepare them for adoption. A volunteer worker brought a dog up stage and told the Dalai Lama, “I’ve always loved animals, but I didn’t like people. Didn’t trust them. Through animals I learned compassion for other people. I am also learning compassion for myself, too.” The Dalai Lama hugged her and bowed to the dog called Daisy.

Photo of the H.H. the Dalai Lama credit: Susan Biddle. The Washington Post, Oct. 19, 2007, by Michelle Boorstein and Debbi Wilgoren, also posted in Phayul News, an excerpt by gh.