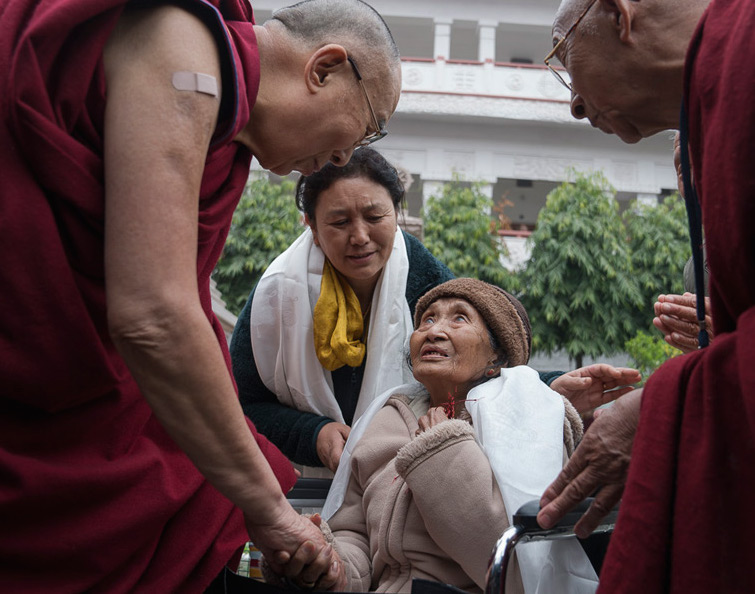 His Holiness the Dalai Lama comforting an elderly Tibetan woman.

You should do everything your guru tells you to do, even if it seems strange, right? Wrong. According to His Holiness the Dalai Lama every student is responsible for checking the guru’s instructions against reason and Dharma. The rationalizations that many students tell themselves in the face of odd guru behaviours – “It must be a teaching” or “It’s crazy wisdom that you can’t question” or “It’s a test” – serve only to damage students who don’t understand that even powerful teachers have personalities that sometimes have blind spots and make mistakes.

His Holiness the Dalai Lama speaks strongly on this topic in this excerpt adapted from The Path to Enlightenment.¹

The offering of practice means always to live by the teachings of one’s guru. But what happens when the guru gives us advice that we do not wish to follow or that contradicts Dharma and reason? The yardstick must always be logical reasoning and Dharma reason. Any advice that contradicts these is to be rejected. This was said by Buddha himself. If one doubts the validity of what is being said, one should gently push the point and clear all doubts. This task becomes somewhat more sensitive in Highest Tantra, where total surrender to the guru is a prerequisite; but even here this surrender must be made only in a particular sense. If the guru points to the east and tells you to go west, there is little alternative for the student but to make a complaint. This should be done with respect and humility, however, for to show any negativity towards a teacher is not a noble way of repaying his or her kindness.

Perception of faults in the guru should not cause us to feel disrespect, for by demonstrating faults to us the guru is actually showing us what we should abandon. At least, this is the most useful attitude for us to take. An important point here is that the disciple must have a spirit of sincere inquiry and must have clear, rather than blind, devotion.

It is frequently said that the essence of the training in guru yoga is to cultivate the art of seeing everything the guru does as perfect. Personally I myself do not like this to be taken too far. Often we see written in the scriptures, “Every action seen as perfect.” However, this phrase must be seen in the light of Buddha Shakyamuni’s own words: “Accept my teachings only after examining them as an analyst buys gold. Accept nothing out of mere faith in me.” The problem with the practice of seeing everything the guru does as perfect is that it very easily turns to poison for both the guru and the disciple. Therefore, whenever I teach this practice, I always advocate that the tradition of “every action seen as perfect” not be stressed. Should the guru manifest unDharmic qualities or give teachings contradicting Dharma, the instruction on seeing the spiritual master as perfect must give way to reason and Dharma wisdom.

Take myself, for example. Because many of the previous Dalai Lamas were great sages and I am said to be their reincarnation, and also because in this lifetime I give frequent religious discourses, many people place much faith in me, and in their guru yoga practice they visualize me as being a Buddha – I am also regarded by these people as their secular leader. Therefore, this teaching of “every action seen as perfect” can easily become poison for me in my relationship with my people and in my effective administration. I could think to myself, “They all see me as a buddha, and therefore will accept anything I tell them.” Too much faith and imputed purity of perception can quite easily turn things rotten. I always recommend that the teaching on seeing the guru’s actions as perfect should not be stressed in the lives of ordinary practitioners. It would be an unfortunate affair if the Buddhadharma, which is established by profound reasoning, were to have to take second place to it.

Perhaps you will think: “The Dalai Lama has not read the Lam Rim scriptures. He does not know that there is no practice of Dharma without the guru.” I am not being disrespectful of the Lam Rim teachings. A student of the spiritual path should rely upon a teacher and should meditate on that teacher’s kindness and good qualities; but the teaching on seeing his or her actions as perfect can only be applied within the context of the Dharma as a whole and the rational approach to knowledge that it advocates. As the teachings on seeing the guru’s actions as perfect is borrowed from Highest Tantra and appears in the Lam Rim mainly to prepare the trainee for tantric practice, beginners must treat it with caution. As for spiritual teachers, if they misrepresent this precept of guru yoga in order to take advantage of naive disciples, their actions are like pouring the liquid fires of hell directly into their stomachs.

The disciple must always keep reason and knowledge of Dharma as principal guidelines. Without this approach it is difficult to digest one’s Dharma experiences. Make a thorough examination before accepting someone as a guru, and even then follow that teacher within the conventions of reason as presented by Buddha. The teachings on seeing the guru’s actions as perfect should largely be left for the practice of Highest Tantra, wherein they take on a new meaning. One of the principal yogas in the tantric vehicle is to see the world as a mandala of great bliss and to see oneself and all others as Buddhas. Under these circumstances it becomes absurd to think that you and everyone else are Buddhas, but your guru is not!

Actually, the more respect one is given the more humble one should become, but sometimes this principle becomes reversed. A spiritual teacher must guard himself or herself carefully and should remember the words of Lama Drom Tonpa, “Use respect shown to you as a cause for humility.” This is the teacher’s responsibility. The student has the responsibility of using wisdom in his or her demonstration of faith and respect.

A problem is that we usually only observe those teachings that feed our delusions and ignore those that would overcome them. This leniency can easily lead to one’s downfall. This is why I say that the teaching on seeing all the guru’s actions as perfect can be a poison. Many sectarian problems in Tibet were born and nourished by it.

The First Dalai Lama wrote, “The true spiritual master looks upon all living beings with thoughts of love and shows respect to teachers of all traditions alike. Such a one only harms delusion, the enemy within.” The different traditions have arisen principally as branches of skillful methods for trainees of varying capacities. If we take an aspect of their teachings, such as the precept of “all actions seen as perfect,” and use it for sectarian purposes, how have we repaid the past masters for their kindness in giving and transmitting Dharma? Have we not disgraced them? If we misunderstand and mispractice their teachings, it will hardly please them. Similarly, it is meritorious for a lama to perform rituals or give initiations to benefit people, but if his or her motivation is only material benefit, that person would be better off going into business instead. Using the mask of Dharma to exploit people is a great harm.

We erect elaborate altars and make extensive pilgrimages, but better than these is to remember Buddha’s teachings: “Never create any negative action; always create goodness; aim all practices at cultivating the mind.” When our practice increases delusion, negativity and disturbed states of mind, we know that something is wrong.

It is sometimes said that a major cause of the decline of Buddhism in India eight hundred years ago was the practice of Vajrayana by unqualified people, and sectarianism caused by corruption within the Sangha. Anyone teaching Tibetan Buddhism should keep this in mind when they refer to the precept, “every action of the guru is to be seen as perfect.” This is an extremely dangerous teaching, particularly for beginners.

¹ This excerpt adapted from The Path to Enlightenment was published in Snow Lion The Buddhist Magazine & Catalog Volume 23, Number 3, Summer 2009