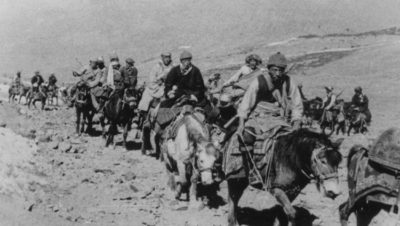 The 14th Dalai Lama fleeing Tibet into exile with Khampa (men from the Eastern province of Kham) bodyguards in March, 1959. (Photo/OHHDL)

The next nine years saw His Holiness trying to evade a full-scale military takeover of Tibet by China on the one hand and placating the growing resentment among Tibetan resistance fighters against the Chinese aggressors on the other. His Holiness made a historic visit to China from July 1954 to June 1955 and met with Mao Zedong and other Chinese leaders, including Chou Enlai, Zhu Teh and Deng Xiaoping. From November 1956 to March 1957 His Holiness visited India to participate in the 2500th Buddha Jayanti celebrations. When the young Dalai Lama was taking his final monastic examinations in Lhasa in the winter of 1958/59 disheartening reports of increasing brutality against his people continued to pour in.

On 10th March 1959, General Zhang Chenwu of Communist China extended a seemingly innocent invitation to the Tibetan leader to attend a theatrical show by a Chinese dance troupe. When the invitation was repeated with new conditions that no Tibetan soldiers were to accompany the Dalai Lama and that his bodyguards be unarmed, an acute anxiety befell the Lhasa population. Soon a crowd of tens of thousands of Tibetans gathered around the Norbulingka Palace, determined to thwart any threat to their young leader’s life and prevented His Holiness from going.

On 17 March 1959 during a consultation with the Nechung Oracle, His Holiness was given an explicit instruction to leave the country. The Oracle’s decision was confirmed when a divination performed by His Holiness produced the same answer, even though the odds against making a successful escape seemed terrifyingly high.

A few minutes before ten o’clock in the evening His Holiness, disguised as a common soldier, slipped past the massive throng of people along with a small escort and proceeded towards the Kyichu river, where he was joined by the rest of his entourage, including some members of his immediate family.

Three weeks after escaping Lhasa, on 31 March 1959, His Holiness and his entourage reached the Indian border from where they were escorted by Indian guards to the town of Bomdila in the present day Indian state of Arunachal Pradesh. The Indian government had already agreed to provide asylum to His Holiness and his followers in India. Soon after his arrival in Mussoorie on 20 April 1959, His Holiness met with the Indian Prime Minister and the two talked about rehabilitating the Tibetan refugees.

Realizing the importance of modern education for the children of Tibetan refugees, His Holiness impressed upon Nehru the need to create a Special Section for Tibetan Education within the Indian Ministry of Education. The Indian Government agreed to bear all the expenses for setting up the schools for the Tibetan children.

Thinking the time was ripe for him to break his elected silence, His Holiness called a press conference on 20 June 1959 during which he formally repudiated the Seventeen-Point Agreement. In the field of administration, too, His Holiness was able to make radical changes. He oversaw the creation of various new Tibetan administrative departments. These included the Departments of Information, Education, Home, Security, Religious Affairs and Economic Affairs. Most of the Tibetan refugees, whose number had grown to almost 30,000, were moved to road-building camps in the hills of northern India.

On 10 March 1960 just before leaving for Dharamsala with the eighty or so officials who comprised the Central Tibetan Administration, His Holiness made a statement on the first anniversary of the Tibetan People’s Uprising. “On this first occasion, I stressed the need for my people to take a long-term view of the situation in Tibet. For those of us in exile, I said that our priority must be resettlement and the continuity of our cultural traditions. As to the future, I stated my belief that, with truth, justice and courage as our weapons, we Tibetans would eventually prevail in regaining freedom for Tibet”. https://www.dalailama.com/the-dalai-lama/biography-and-daily-life/birth-to-exile