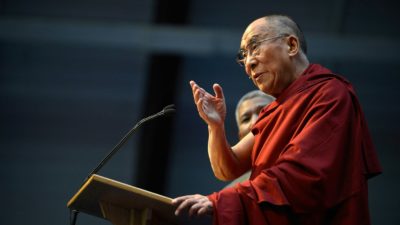 His Holiness the 14th Dalai Lama: All major world religions have the same potential to create good human beings.

Firstly, as a human being, His Holiness is concerned with encouraging people to be happy: helping them understand that if their minds are upset mere physical comfort will not bring them peace, but if their minds are at peace even physical pain will not disturb their calm. He advocates the cultivation of warm-heartedness and human values such as compassion, forgiveness, tolerance, contentment and self-discipline. He says that as human beings we are all the same. We all want happiness and do not want suffering. Even people who have no religious belief can benefit if they incorporate these human values into their lives. His Holiness refers to such human values as secular ethics or universal values. He is committed to talking about the importance of such values and sharing them with everyone he meets.

Secondly, as a Buddhist monk, His Holiness is committed to encouraging harmony among the world’s religious traditions. Despite philosophical differences between them, all major world religions have the same potential to create good human beings. It is therefore important for all religious traditions to respect one another and recognize the value of their respective traditions. The idea that there is one truth and one religion is relevant to the individual practitioner. However, with regard to the wider community, he says, there is a need to recognise that human beings observe several religions and several aspects of the truth.

Thirdly, His Holiness is a Tibetan and as the ‘Dalai Lama’ is the focus of the Tibetan people’s hope and trust. Therefore, he is committed to preserving Tibetan language and culture, the heritage Tibetans received from the masters of India’s Nalanda University, while also speaking up for the protection of Tibet’s natural environment.

In addition, His Holiness has lately spoken of his commitment to reviving awareness of the value of ancient Indian knowledge among young Indians today. His Holiness is convinced that the rich ancient Indian understanding of the workings of the mind and emotions, as well as the techniques of mental training, such as meditation, developed by Indian traditions, are of great relevance today. Since India has a long history of logic and reasoning, he is confident that its ancient knowledge, viewed from a secular, academic perspective, can be combined with modern education. He considers that India is, in fact, specially placed to achieve this combination of ancient and modern modes of knowing in a fruitful way so that a more integrated and ethically grounded way of being in the world can be promoted within contemporary society.