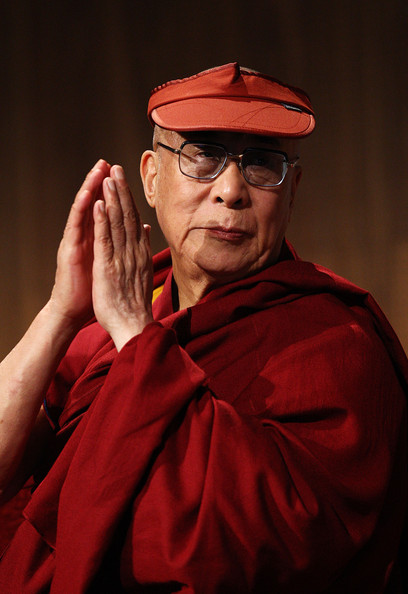 Wherever I go, with whomever I go may I see myself as less than all others, and from the depth of my heart may I consider them supremely precious.

The first verse pointed to the need to cultivate the thought of regarding all other sentient beings as precious. In the second verse, the point being made is that the recognition of the preciousness of other sentient beings, and the sense of caring that you develop on that basis, should not be grounded on a feeling of pity toward other sentient beings, that is, on the thought that they are inferior. Rather, what is being emphasized is a sense of caring for other sentient beings and a recognition of their preciousness based on reverence and respect, as superior beings. I would like to emphasize here how we should understand compassion in the Buddhist context. Generally speaking, in the Buddhist tradition, compassion and loving kindness are seen as two sides of same thing. Compassion is said to be the empathetic wish that aspires to see the object of compassion, the sentient being, free from suffering. Loving kindness is the aspiration that wishes happiness upon others. In this context, love and compassion should not be confused with love and compassion in the conventional sense. For example, we experience a sense of closeness toward people who are dear to us. We feel a sense of compassion and empathy for them. We also have strong love for these people, but often this love or compassion is grounded in self-referential considerations: “So-and-so is my friend,” “my spouse,” “my child,” and so on. What happens with this kind of love or compassion, which may be strong, is that it is tinged with attachment because it involves self-referential considerations. Once there is attachment there is also the potential for anger and hatred to arise. Attachment goes hand in hand with anger and hatred. For example, if one’s compassion toward someone is tinged with attachment, it can easily turn into its emotional opposite due to the slightest incident. Then instead of wishing that person to be happy, you might wish that person to be miserable.

True compassion and love in the context of training of the mind is based on the simple recognition that others, just like myself, naturally aspire to be happy and to overcome suffering, and that others, just like myself, have the natural right to fulfill that basic aspiration. The empathy you develop toward a person based on recognition of this basic fact is universal compassion. There is no element of prejudice, no element of discrimination. This compassion is able to be extended to all sentient beings, so long as they are capable of experiencing pain and happiness. Thus, the essential feature of true compassion is that it is universal and not discriminatory. As such, training the mind in cultivating compassion in the Buddhist tradition first involves cultivating a thought of even-mindedness, or equanimity, toward all sentient beings. For example, you may reflect upon the fact that such-and-such a person may be your friend, your relative, and so forth in this life, but that this person may have been, from a Buddhist point of view, your worst enemy in a past life. Similarly, you apply the same sort of reasoning to someone you consider an enemy: although this person may be negative toward you and is your enemy in this life, he or she could have been your best friend in a past life, or could have been related to you, and so on. By reflecting upon the fluctuating nature of one’s relationships with others and also on the potential that exists in all sentient beings to be friends and enemies, you develop this even-mindedness or equanimity.

The practice of developing or cultivating equanimity involves a form of detachment, but it is important to understand what detachment means. Sometimes when people hear about the Buddhist practice of detachment, they think that Buddhism is advocating indifference toward all things, but that is not the case. First, cultivating detachment, one could say, takes the sting out of discriminatory emotions toward others that are based on considerations of distance or closeness. You lay the groundwork on which you can cultivate genuine compassion extending to all other sentient beings. The Buddhist teaching on detachment does not imply developing an attitude of disengagement from or indifference to the world or life.

Moving on to another line of the verse, I think it is important to understand the expression “May I see myself lower than all others” in the right context. Certainly it is not saying that you should engage in thoughts that would lead to lower self-esteem, or that you should lose all sense of hope and feel dejected, thinking, “I’m the lowest of all. I have no capacity, I cannot do anything and have no power.” This is not the kind of consideration of lowness that is being referred to here. The regarding of oneself as lower than others really has to be understood in relative terms. Generally speaking, human beings are superior to animals. We are equipped with the ability to judge between right and wrong and to think in terms of the future and so on. However, one could also argue that in other respects human beings are inferior to animals. For example, animals may not have the ability to judge between right and wrong in a moral sense, and they might not have the ability to see the long-term consequences of their actions, but within the animal realm there is at least a certain sense of order. If you look at the African savannah, for example, predators prey on other animals only out of necessity when they are hungry. When they are not hungry, you can see them coexisting quite peacefully. But we human beings, despite our ability to judge between right and wrong, sometimes act out of pure greed. Sometimes we engage in actions purely out of indulgence–we kill out of a sense of “sport,” say, when we go hunting or fishing. So, in a sense, one could argue that human beings have proven to be inferior to animals. It is in such relativistic terms that we can regard ourselves as lower than others. One of the reasons for using the word “lower” is to emphasize that normally when we give in to ordinary emotions of anger, hatred, strong attachment, and greed, we do so without any sense of restraint. Often we are totally oblivious to the impact our behavior has on other sentient beings. But by deliberately cultivating the thought of regarding others as superior and worthy of your reverence, you provide yourself with a restraining factor. Then, when emotions arise, they will not be so powerful as to cause you to disregard the impact of your actions upon other sentient beings. It is on these grounds that recognition of others as superior to yourself is suggested. http://www.dalailama.com/teachings/training-the-mind/verse-2