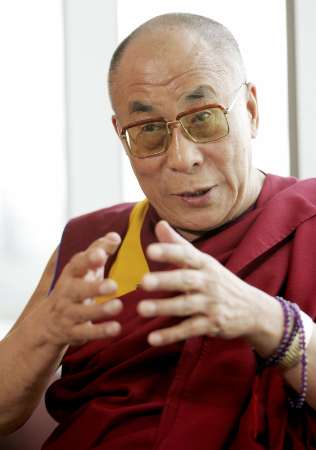 His Holiness the Dalai Lama: The Sanskrit term bhagavan has the connotation of someone who has conquered and gone beyond the state of negativity and limitation.

Teachings given at Los Angeles, CA 2000 by His Holiness the Dalai Lama on Illuminating the Path to Enlightenment

Lamp for the Path: Verse 4

Those who seek peace for themselves alone,
Turning away from worldly pleasures
And avoiding destructive actions
Are said to be of middling capacity.

In this reference to turning away from worldly pleasures, we have to understand that according to Buddhism, even things and events that are conventionally regarded as pleasurable are ultimately all dukkha, that is they are of the nature of suffering and dissatisfaction. When the Buddha explains the path that transcends suffering, he is referring not only to painful experiences but also to conventionally pleasurable ones. This understanding is not unique to Buddhism, but common to both Buddhist and non-Buddhist schools in India.

We can see this by looking at some of the meditation practices found in non-Buddhist traditions, particularly those aimed at cultivating the four levels of concentration. The fourth level of concentration, in particular, is said to be a state where, for the meditator, pleasurable and painful experiences no longer exist. Then, of course, the higher levels of the four formless absorptions are also beyond any sensations of pain or pleasure.34 Even though some non-Buddhist schools accept that one needs to transcend even pleasurable sensations, the unique understanding of Buddhism is that the very condition upon which these experiences arise is also of the nature of suffering and there f o re the basis of dissatisfaction.

“Destructive actions” means all karmic actions that perpetuate the cycle of conditioned existence; practitioners of middling capacity generate the genuine aspiration to seek freedom from it. They seek to engage in a path that undercuts the process generated by fundamental ignorance and to reverse the whole causal nexus of ignorance, volitional karmic acts and their subsequent sufferings. All the practices related to this spiritual goal are common to practitioners of middling capacity, the term “common” indicating that these practices are preparatory, or preliminary, stages for the Mahayana practitioner.

When practitioners cultivate the recognition that the emotional and mental afflictions are the true enemy and that underlying them is fundamental ignorance, they then engage in the methods for eliminating this ignorance. Practitioners recognize that as long as they remain under the control of the afflictions, they will never be free of dissatisfaction and suffering. If, based on this recognition, practitioners then generate a genuine and deeply felt aspiration to seek liberation from this bondage, that is true renunciation. This is a sentiment and practice unique to the Buddhist path.

Understanding the nature of cyclic existence

If you do not make an effort to think about true sufferings and their drawbacks, you will not properly develop a keen interest to work for liberation. If you do not consider the stages whereby (true) origins of all suffering place and keep you in cyclic existence, you will not know the means for cutting the root of this vicious circle. Therefore, you should cherish exuding total disgust and renunciation of such existence by knowing which factors bind you to its wheel. I, the yogi, have practiced just that. You who also seek liberation, please cultivate yourself in the same way.

The sufferings referred to in the first sentence are the three levels of suffering. The first is the suffering of suffering—the obvious and evident painful experiences and sensations that we all experience. The second is the suffering of change; the third, the suffering of pervasive conditioning. In the context of cultivating true renunciation, we are really looking at the third category—the suffering of pervasive conditioning, which refers to the simple fact that our existence is controlled by fundamental ignorance and the afflictions to which it gives rise. As long as we are bound by these afflictions, there’s no room for any lasting happiness. It is crucial, therefore, that we develop a deeply felt recognition of the afflictions as our true enemy; without it, we will not develop a genuine aspiration to seek freedom from them.

The Sanskrit term bhagavan, which is sometimes translated into English as lord, as in Lord Buddha, has the connotation of someone who has conquered and gone beyond the state of negativity and limitation. “Conquered” refers to the Buddha’s victory over the four “demons,” or obstructive forces [Skt: mara]:

Of these four obstructive forces, the main one is the afflictions. A buddha is someone who has totally overcome, or conquered, these four maras.35

Actually, the obstructive, or demonic, forces are the afflictions and anything that voluntarily embraces them, and when the afflictions and virtue come into conflict and we take the side of the afflictions, we ourselves ru n the risk of becoming a part of the obstructions. Also, if somebody willingly and enthusiastically embraces the afflictions and relishes the experience of having them in his or her life, that person will see practitioners trying to combat their own destructive, negative emotions as misguided or even crazy. Such a person, too, becomes a part of the obstructive forces. As Tibetan masters like to say, “Negative friends don’t necessarily appear with horns on their heads.” Negative friends are simply those who interfere with the spiritual practice of others.

If, then, you have a deeply felt recognition of the afflictions as the true enemy, the aspiration will naturally arise within you to free yourself from them and gain liberation. However, simply having the aspiration to be free is not enough. You also need to develop an understanding of whether such freedom is possible and whether you can cultivate it within yourself.

The afflictions and the karmic actions they produce are the cause of suffering; underlying them is fundamental ignorance. You need to develop a deep understanding of how the cause of suffering actually leads to its result. If you do not understand how cyclic existence comes into being and how its sufferings arise, then even though you may want to gain freedom, you won’t be able to understand how it can come about. Then you might become disheartened, because although you realize the nature of your bondage, you can’t see the possibility of release.

There are grosser levels at which we can understand no-self, such as the absence of the person as some kind of autonomous agent. Grasping at the self as an autonomous agent serves as a basis for other afflictions such as attachment and hostility, which can be eliminated, but true liberation can only occur by eradicating the subtlest grasping at self. Therefore, the text reads, “If you do not consider the stages whereby (true) origins of all suffering place and keep you in cyclic existence, you will not know the means for cutting the root of this vicious circle. Therefore, you should cherish exuding total disgust and renunciation of such existence by knowing which factors bind you to its wheel.”

There are two key elements in the practice of renunciation—the cultivation of a sense of disillusionment with cyclic existence and an understanding of the causal mechanism of the origin of suffering. When you have generated this combination of disillusionment and understanding, you can envision the possibility of freedom. With this, you will experience a sense of joy, because not only can you see the possibility of release; you also have the confidence that there exists a path by which you can attain it.

The process of causation of the Four Noble Truths is explained in greater detail in the teachings of the twelve links of dependent origination, which we discussed earlier [see page 81]. It is possible to contemplate these teachings at three different levels. On one level, we can contemplate the twelve links in relation to the process of taking rebirth in the three lower realms, beginning from fundamental ignorance obscuring the true nature of reality, which leads to the volitional negative acts that precipitate lower rebirths.

We can also contemplate the twelve links in relation to cyclic existence in general, because even positive karma can give rise to rebirth in cyclic existence. Finally, it is possible to contemplate the twelve links specifically in the context of the subtle obscurations to knowledge, where although the individual may have gained freedom from the afflictions, there is still continuity in physical, or conditioned, existence.

When we think of liberation, we should not feel that it exists somewhere outside of us, like some physical domain. Liberation has to be understood in terms of our own state of mind. We have already mentioned natural nirvana—the natural purity in all of us that serves as the basis of true liberation once all the afflictions have been eliminated. When we go deeper into the meaning of the nature of liberation, or moksha, therefore, we understand it in terms of the ultimate nature of our own mind when all afflictions have been removed.

What lies at the root of our unenlightened37 existence is our fundamental misconception of the ultimate nature of reality. Therefore, by cultivating correct insight into true nature of reality, we begin the process of undoing unenlightened existence and set in motion the process of liberation. Samsara and nirvana are distinguished on the basis of whether we’re in a state of ignorance or wisdom. As the Tibetan masters say, when we’re ignorant, we’re in samsara; when we develop wisdom, we’re liberated. The ultimate antidote for eliminating fundamental ignorance is the wisdom realizing emptiness. It is this emptiness of mind that is the final nirvana.

The Buddha taught the path that enables us to eliminate the afflictions and gain liberation on the basis of the Three Higher Trainings. The direct antidote to fundamental ignorance is the wisdom realizing no-self, the wisdom realizing emptiness. This does not refer to a mere cognition of emptiness but to a heightened realization where we can experience emptiness directly.

The practice of morality enables us to accumulate merit and purify negativity, but in the context of the Three Higher Trainings, its main purpose is to develop mindfulness and introspection. When we lead an ethically disciplined life, we are constantly applying these two faculties. As we sharpen our mindfulness and introspection, we lay the foundation for the successful realization of single-pointed concentration. The practices of morality, concentration and insight are all essential. The sequence is also definite: first, morality; then, meditative concentration; then, insight into emptiness.

Question. You said that emotional afflictions are the causes of suffering. Can we remove our afflictions without removing our emotions?

His Holiness the Dalai Lama. Definitely. For example, one of the antidotes to emotional afflictions is meditation on emptiness. As we deepen our experience of emptiness, we get a powerful surge of emotion, which itself acts to counter the negative, or afflictive, emotions. We also find in Buddhist practice specific antidotes to specific problems. For example, we meditate on loving kindness to counter hatred and hostility, and on impermanence to counter strong attachment. In other words, the emotion of love is generated as an antidote to anger and the experience of impermanence as an antidote to attachment.

Question. Does love dilute pain and suffering in the same way that light dispels darkness?

His Holiness the Dalai Lama. Perhaps the parallel is not that close, because light dispels dark directly and instantaneously; darkness vanishes the moment you switch on a light. The effect of love on pain and suffering is more complex and indirect. When we cultivate love and compassion, they promote within us strength and courage, allowing us to be more tolerant and able to bear hardship. This is how love helps us deal with and overcome pain and suffering. It’s an indirect relationship. http://www.lamayeshe.com/index.php?sect=article&id=398