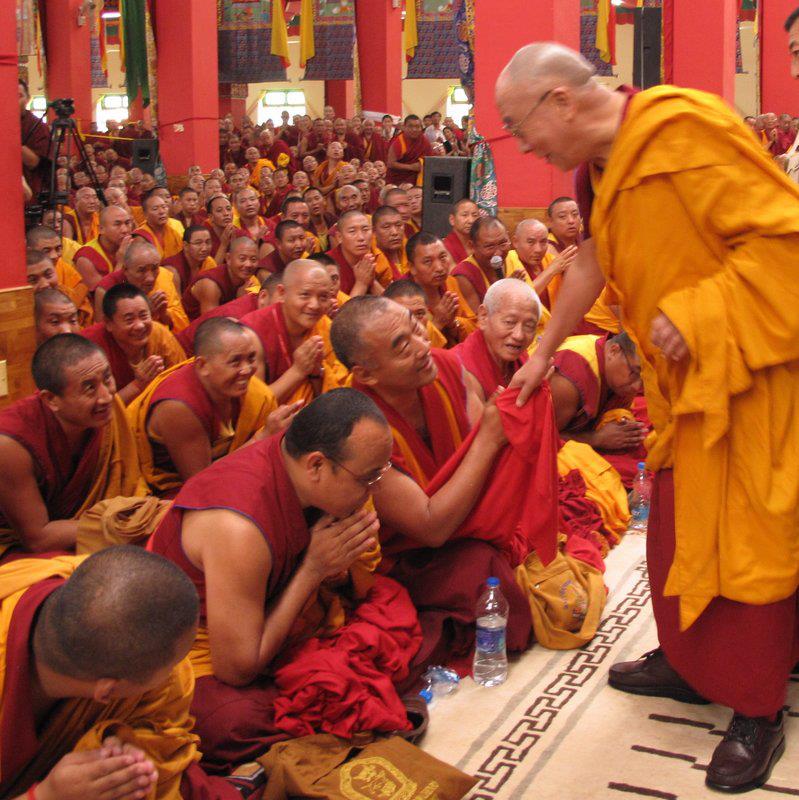 Tenth part of His Holiness the Dalai Lama’s teachings Nov. 30 – Dec. 13, 2012 on the 18 Great Stages of the Path (Lam Rim) Commentaries at Gaden and Drepung Monasteries in Mundgod, India, see http://www.jangchuplamrim.org/ and video here http://www.dalailama.com/webcasts/post/267-18-great-stages-of-the-path-lam-rim-commentaries. Translated from Tibetan into English by Lotsava Tenzin Tsepag. Trascript by Dr. Peter Lawrence-Roberts, first revision and editing by Dr. Luciano Villa within the project “Free Dalai Lama’s Teachings” for the benefit of all sentient beings. We apologize for any possible error and omission.

The Seventh Dalai Lama said that all we see is empty and the mind itself which perceives these things is also empty. He said that all phenomena, including samsara and nirvana, exist through the conceptions in our mind and the language we use to describe them. All these things appear to us in this way, but we can easily prove that they don’t exist in this way. The experiences of pain and pleasure that we have seem very real. They certainly seem to have objective existence. If this were true hen when we search for them within the aggregates, the basis of designation, then they would become clearer and clearer, but this is not the case.

The Seventh Dalai Lama said that all perceived things disappear like clouds in the Autumn sky when we understand their true nature.

Lama Tsong Khapa says that he is delighted to follow the teaching of the Buddha which does away with all antagonistic views.

All the different religions of the world have different beliefs and deities. They all have in common that they seek support from a higher source when they are unable to deal with their problems. However, there is often not much philosophical background to their beliefs.

The major religious traditions do all have a philosophical background and all teach love, compassion, self-discipline and so on. Although there are many different approaches within the different religious traditions, and indeed within Buddhism itself, we should all be harmonious and live together peacefully rather than using differences as a reason for division. The more an intelligent person scrutinises the teachings of the Buddha the more they will see the correctness of it.

The reason we find scrutiny of other systems is not to create attachment to one’s own system and aversion to others, but rather to elucidate the principles of the teaching so as to lead us to enlightenment. We examine the teachings ourselves while relying on the great masters who have examined and scrutinised the texts. We should not use these differences to create bias. All the Tibetan traditions come through the pure Nalanda tradition through Shantarakshita.

There are different approaches within the Nyingma. In the Kagyu we also have different approaches which, when adhered to, can create attachment. We should avoid all sectarianism and discord. The criticisms the Indian masters made of classic texts were not made with a view to sectarianism, but rather with a view to clarification and therefore help for us on the path to enlightenment.

In the past we have made distinctions between the different Tibetan schools on the basis of the colour of hat they use, either yellow or red. However, just wearing a yellow hat does not make one a Gelugpa master. If you put a yellow hat or a red hat on a donkey there is no difference! Rather, a Gelugpa master needs to on study and understand the 18 texts of Lama Tsong Khapa and to be able to explain the nine yanas and the graded path. Otherwise it will be difficult to please the learned scholars.

In the Kagyu there are four major and eight minor divisions. One would need to know the whole system in order to be able to teach from a Kagyu perspective.

The medication effective on one path, for example Tantra, can turn into poison for one who needs a more gradual path. So we need to be able to distinguish between these paths in order to have harmony within ourselves.

Now as refugees the Tibetan community is very harmonious and there is a good atmosphere of friendship and discussion between the different traditions. After coming into exile the best studying of epistemology, which was formerly within the Sakya school, is within the Gelugpa tradition. Other traditions can learn from this. However, key texts from other traditions, for example Sakya Pandita’s Treasury of Knowledge http://www.sangye.it/altro/?p=4724 are very useful also.

We have to be very careful to preserve the Dharma. Making sectarian distinctions that cause divisions is dangerous. One reason I talk about the wrongness of the propitiation of Shugden https://www.sangye.it/wordpress2/?cat=53 is that they cause division. They say, for example, that a Gelugpa practitioner should not have a Nyingma text in their house. In the Tibetan community now over 99% renounce the propitiation of Shugden. Some inside Tibet, however, through ignorance, say that Ganden, Drepung and Sera monasteries have become Nyingma because they renounce Shugden. Of course this is complete nonsense. The Thirteenth Dalai Lama said that by propitiating Shugden one actually goes against taking refuge in the Buddha, Dharma and Sangha.

If we pray within a temple that our enemies should not have success and should meet with difficulties this is not good. The Fifth Dalai Lama spoke authoritatively about this.

If individual teachers are encouraging their students to be sectarian, then they cause them to have attachment to their own individual traditions and this is not good.

(last stanza p244 vol 3) If there is intrinsic nature in things then we cannot overcome the obscurations linked to this concept.

It is valid cognition which, it’s protagonists claim, is the mind which is incontrovertible with regard to the objects author appear. For example, in a debate in which sound is proved to be impermanent, this is argued on the basis that the mode of existence of the object is nowhere to be found. So in the Heart of the Madhyamaka by Bhavaviveka it says all these misconceptions disappear on the uncontaminated path.

If the self and the aggregates were the same then, given that there are many aggregates there would also be many selves. Alternatively, if there is one self there can only be one composite aggregate which could not disintegrate into its component parts.

If the self and the aggregates were to exist ultimately then their natures would be fully compatible whereas, in fact, they are not.

The Seventh Dalai Lama said in his Song of the View – the Four Mindfulnesses that at the crossroads of the Six Perfections there is the dualistic illusory appearance which has no ground. Investigation shows that it is merely a name and yet to us they seem to exist with their own power. He cautioned us not to believe this to be true but to see it as a wrong belief utterly without ground or root.

When we recite mantras in Sanskrit it gives us nothing if we don’t understand the meaning. We will only come to a realisation of emptiness thorough understanding. Whatever practice we do it is important to understand what we are doing and what it means. If we use the same words over and over again it can be like the blade of a knife becoming blunt. So we need to use many different approaches to reasoning on emptiness in order to keep our understanding fresh.

When we come across powerful statements in the Madhyamaka texts we should write them down and reflect on them to enhance our understanding of emptiness. Using such passages from the texts of the great masters can at least give us a feeling for emptiness.

There are certain instructions that appear to be fitting at a beginner’s level but we need to be sure the these texts negate the existence of an intrinsic ‘I’. However, they may only be able to do this at the gross level and not at the subtle level.

I met a scientist, Aaron Beck, who told me that when we become angry, the person or thing we become angry at appears ugly. However, 90% of this is our own mental projection. The object appears totally negative to us. That is our perception but it is not the way things are.

Chandrakirti said that there is no advantage to something being produced from itself. There would be no benefit in something already produced arising again.

Nagarjuna says that whatever is dependently arisen has peace, since acceptance of dependent origination cuts off all bad views.

Emptiness does not mean that nothing exists. That is nihilism. It means that things do not exist intrinsically or independently of causes and conditions. The Heart Sutra says not that things don’t exist, but that they don’t exist according to their perceived nature. Realising dependent origination does not imply holding extreme views. Rather it shows am understanding of the Middle Way.

There were no Lam Rim teachings this morning. Today marks the 23rd anniversary of the conferring of the Nobel Peace Prize on His Holiness. The occasion will be marked by speeches by His Holiness and other Indian and Tibetan dignitaries. Also, a special award has been presented to His Holiness by the Gelug Tradition of Tibetan Buddhism to honour his great contribution to humanity. His Holiness teachings have been conferred in the noon.