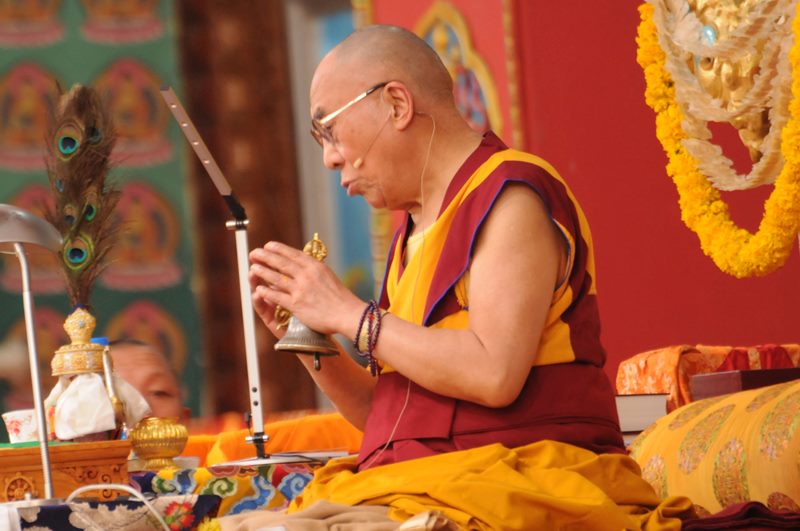 Dependent origination does not mean the non-existence of things that perform functions. It simply means that they exist dependent on causes and conditions.

Ninth part of His Holiness the Dalai Lama’s teachings Nov. 30 – Dec. 13, 2012 on the 18 Great Stages of the Path (Lam Rim) Commentaries at Gaden and Drepung Monasteries in Mundgod, India, see http://www.jangchuplamrim.org/ and video here http://www.dalailama.com/webcasts/post/267-18-great-stages-of-the-path-lam-rim-commentaries. Translated from Tibetan into English by Lotsava Tenzin Tsepag. Trascript by Dr. Peter Lawrence-Roberts, first revision and editing by Dr. Luciano Villa within the project “Free Dalai Lama’s Teachings” for the benefit of all sentient beings. We apologize for any possible error and omission.

The elephant of the mind is tied with the rope of mindfulness to a pillar. This very much restricts its movement and brings about mental stabilisation.

Laxity does not mean that the mind is focussed on the object but it is not sharp and clear. Rather, as Kamalashila makes clear, it is a state of lethargy or sleepiness resulting from the mind being focussed on other things.

Iron filings have no choice but move under the influence of a magnet. Similarly, our mind will have no choice but to remain limpid and clear if we use mindfulness to drive away laxity and excitement and remain focussed single-pointedly on the object.

Shantideva http://www.sangye.it/altro/?cat=15 tells us that if our mind becomes slack we should meditate on delight. This should have the same effect on our mind as cold water being thrown in the face of a sleeping person.

In 2011 there was a Mind and Life conference held in Delhi. There were some Hindu and Jain scholars there. One gave a presentation on how the mind moves from gross levels to more subtle levels. This sounded like the ever more subtle levels of mind found in the Highest Yoga Tantra. However, it is not likely to refer to this, but rather to the mind described in the Shravaka Levels. It is clear from his profound presentation that these subtle levels of mind arouse interest as much in some non-Buddhist circles as in Buddhist ones.

Many non-Buddhist systems reinforce a belief in the self and the grasping at it. They see it as a lord which governs both the body and the mind. They can become frightened by the idea that there is no self that creates karma. His Holiness explained the principle of dependent origination to a friend, a university professor, who felt this way. He was fearful of the concept of no-self. Once he understood dependent origination and what is meant by emptiness his fear subsided.

Every illumination of afflictions comes from the cultivation of serenity and insight.

Lama Tsong Khapa says in The Song of Experience http://www.sangye.it/altro/?p=603 that concentration is the king which rules the mind.

Atisha’s text “A Lamp for the Path of Enlightenment” http://www.sangye.it/altro/?p=1095, verses 42 – 54, makes clear that nothing is produced from an inappropriate cause and this, along with other key texts, establishes conclusively that the nature of all things is emptiness. Atisha advises us in this context to meditate on non-conceptuality. We will always produce afflictions until we have freed ourselves from the concept of self.

If we examine the writings of great masters such as Nagarjuna and Asanga we will see them to be great masters. We should hold them to be masters on the basis of the evidence of the depth of their texts and what they teach us and not on any other basis.

Shantarakshita established his own Madhyamaka philosophy. He was invited to Tibet by the Tibetan emperor and was a very powerful master.

The distinction between Madhyamaka Svatantrika and Madhyamaka Prasangika is set out clearly in the Clear Words of Chandrakirti.

We need to understand how we produce afflictions. It is from grasping at inherent existence. Our intensity of grasping is strongest we things we like or with people we love. These things seem to us to have objective existence and we then cling to that objective existence. We need to cultivate certainty in the non-objective nature of things. Once we have this we will gain insight.

(Today is the Parinirvana of Lama Tsong Khapa http://www.sangye.it/altro/?cat=22 so we will say Khedrup Je’s prayer to Tsong Khapa as well as other prayers.)

Longchenpa, Sakya Pandita and Lama Tsong Khapa are usually referred to as the three emanations of Manjushri. Lama Tsong Khapa moved to Central Tibet to study the Dharma at the great monastic universities. He became a great scholar himself, and at the age of 25 he wrote the Golden Rosary. He was very learned at a very young age. He was also a very honest person. In his later texts he went back to clarify his position in earlier texts to ensure everyone understood and was not misled. At the request of Manjushri he left the monastery to live as a hermit with his attendants and disciples. He meditated in remote places. He gained an understanding of the true nature of reality and set this out in the Three Principal Aspects of the Path. When he found decisively the understanding of emptiness He wrote praise to the Buddha.

If we consider the 18 volumes of Lama Tsong Khapa’s writings we can infer from them that he was an excellent scholar. If we look at his writing on Tantra it is clear that he was writing from his own experience.

Even the Buddha said he cannot wash away people’s sins, but people still think that if they receive blessings from lamas, yidams, deities etc this is better than study and practice. They become complacent. This is behaving as is we believe in a creator God. It is totally wrong. We can only achieve things by our own effort. Through study and practice we develop the great wisdom within ourselves. No one can give it to us. There is no other way. If we make our own effort we will progress. We can pray to yidams and deities for favourable external conditions to enable us to practice Dharma, but the internal transformation can only come from we ourselves through hard work and continual effort.

We are like someone who is fatigued by suffering, living a tiring life in samsara. This is due to ignorance. We can only overcome the reification of things by developing wisdom and progressing along the path that the Heart Sutra mantra makes clear.

How do we overcome reification? Not through the blessings of lamas or deities, but by using our intelligence and critical analysis. That was these reifications disappear into the space of true reality. Then it is as if we who are fatigued by these reifications can seek shelter in a restful forest hut. All of these appearances of reality disappear and we see them for what they are when we come out of meditative absorption, that is an illusion.

There are 80 conceptions that spring from our mind and, as we train and meditate on emptiness, they dissolve back into luminous mind, leaving us free of fatigue.

Whatever we study should be integrated into our mind and practice. His Holiness pleads with us to practice by means of study, reflection and meditation. This is so important.

Nagarjuna http://www.sangye.it/altro/?cat=9 did not deny the conventional existence of things on which we base it knowledge and understanding, but he did make it clear that there is no objective existence. He posited things in terms of causes and conditions. A cause is called a cause because it gives rise to an effect. Even if the effect has not yet arisen, the event is still a cause. On this way a cause is dependent on its effect, just as, more obviously, an effect is dependent on its cause.

There is a difference between ‘designation’ and ‘merely designated’. ‘Merely designated’ refers to the way we name things. We do not deny the existence of the name, but if we examine the nature of the object so named we find that there is nothing there. Lama Tsong Khapa http://www.sangye.it/altro/?cat=22 said that things can exist in only two ways, that is they either have inherent existence or they exist by their designated name. Since we can clearly show that nothing has inherent existence then it must be ‘merely designated’ by its name. Chandrakirti also made this principle very clear.

Dependent origination does not mean the non-existence of things that perform functions. It simply means that they exist dependent on causes and conditions. If something were to be found when a critical analysis is made into its nature, then it could not be refuted on the basis of reasoning. This would have to mean that it had inherent existence. Logically, if things existed inherently then analysis and reason would surely find them.

Some people on the anniversary of Lama Tsong Khapa’s death recite his Essence of True Eloquence http://www.sangye.it/altro/?p=1062, which distinguishes between definitive and provisional meanings. There is no greater text than Shantideva’s http://www.sangye.it/altro/?cat=15 Guide to the Bodhsattva’s Way of Life for training in bodhicitta. For the understanding of Madhyamaka philosophy there are no better texts than those of Lama Tsong Khapa. The insight sections of Lamrim Chenmo and the Middle Length Lam Rim cannot be surpassed in this regard. We should familiarise ourselves with Lama Tsong Khapa’s texts before we embark on a detailed analysis of Nagarjuna’s texts.

This will be of much more benefit to us than simply repeting mantras hundreds of thousands of times. One great lama said that rather than realising emptiness through endless repetitions of mantras we simply wear away our nails on the beads of the mala!

The birthplace of Lama Tsong Khapa is only a day’s journey away from where His Holiness was born. So His Holiness feels close to him and advocates studying his writings closely.

There is a very subtle form of afflicted emotions which apprehend things as existing in reference to their intrinsic character and qualities. We become attached to things by means of an afflicted misunderstanding. Afflictions depend on delusions. So, if we are able to clear away the delusions then the afflictions will also disappear.

Nagarjuna says in the Fundamental Stanzas on the Middle Way http://www.sangye.it/altro/?p=513 that when ignorance isn’t stopped then all compositional factors will also stop. We will cease to see the aggregates as intrinsically existent.

There are many monastics here so, with regard to the Vinaya, there is a very pure Theravada tradition as well as a Tibetan one. The Theravadins used to say that the Tibetans have no proper Vinaya practice but now they are coming to appreciate that we do. This was based on small differences. For example, there is one month’s difference in Vesak dates between the Tibetan and Theravada traditions, as well as some other small differences in the calculation of dates. In January 2013 there will be an international conference on the Vinaya that will bring the different traditions together.

Often we say ‘this is our position’ and yet we are not able to explain why or to show the sources in the classic texts. This is not good. We should know why we practice certain things and what their source is.

It is clear once we have studied the Madhyamaka texts and then look at the external world that there is an appearance of true existence. If you look at me, the Dalai Lama, you think you see something that appears to exist intrinsically. And yet we know that this is just conventional appearance.