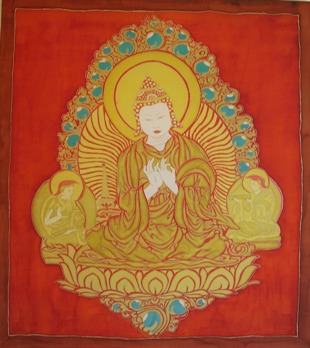 A Lamp for the Path of Enlightenment

1 I bow in great reverence to all past, present and
Future Victors, to their Doctrine and Communities.
I shall light a Lamp for the Path to Enlightenment,
At the request of my good disciple Byang-chub-‘od.

2 In that they are Inferior or Mediocre or Superior,
Persons should be understood as three:
The characteristics of each are very clear,
and I shall note how they differ from one another.

3 One who by every means he finds,
Seeks by the pleasure of samsara,
And cares but for himself alone, that one
Is known as the Inferior Person.

4 One who puts life’s pleasures behind
And turns himself from deeds of sin,
Yet cares only about his own peace,
That person should be called Mediocre.

5 One who wholly seeks a complete end
To the entire suffering of others because
Their suffering belongs to his own [conscious] stream,
That person is a Superior.

6 For those pure beings whose desire
Is the highest of Enlightenments,
I shall explain the right means
Which were taught me by my Gurus.

7 Facing a painted image of the Perfect Buddha,
Or in front of holy reliquaries and the like,
Give worship with flowers and incense
And whatever objects may be at hand.

8 Then with the Sevenfold Worship expressed
In the Deeds of Samantabhadra,
And a mind that does not turn back until
The Heart of Enlightenment is reached,

9 With great faith in the Three Jewels,
Bending knee to the ground,
And folding the hands
First take the Three Refuges thrice.

10 Then, because the Thought of Love for
All creatures is the prerequisite,
One looks out on all the world,
Suffering in death, transmigration,
And rebirth in the three bad destinies:

At sight of that suffering, one suffers;
And he who wants to free the world
From the very cause of such suffering,
Must beget this Thought of Enlightenment
That is pledged never to turn back.

Every quality that belongs to
Begetting thoughts of such Resolution
Has been well explained by Maitreya
In his sutra, the Stalks in Array.

Read that sutra or hear it from a Guru, and when
The infinite benefits of Perfect Enlightenment Thought
Are seen, then for that very reason you
Will beget the Thought again and again.

The merit of this is shown extremely well
In the sutra called the Questions of Viradatta;
And to give the essence of it,
I quote three of its verses here:

“If a form could be had for the full
Merit of the Enlightenment Thought,
It would surpass even one
That filled the whole realm of space.”

“Or take a man who owns jewels, and with them
Fills every one of the Buddha-fields –
Reckoned as more than the grains of Ganga’s sands –
Then offers all this to the Lord of the World;”

“Yet another who merely folds his hands,
And inclines his thought to Enlightenment.
The latter’s worship is higher by far,
Because in it there is found no limit.”

When you get the thoughts of aspiring to Enlightenment,
Then with great effort strive to expand them fully;
And to recall your resolve in your other births,
Observe fully the Training I explained to you.

A right resolve will not be furthered
Without vows that have progress in mind;
Therefore he who seeks growth
in the resolve for Perfect Enlightenment,
earnestly takes them.

Only he who has lasting vows in
One of Pratimoksa’s seven ranks
Is fit for the Vow of the Bodhisattva;
There is no other way for it to be.

The Tathagata has said that of
The seven ranks of Pratimoksa,
The glorious Pure Life is highest;
By which he meant the vows of a Monk.

According to the ritual given in the
Conduct Chapter of the Bodhisattva Levels,
One takes the Vow from any good Guru
Who has the proper characteristics.

One who is learned in the ritual of the Vow,
And himself lives the Vow he has taken,
And has the compassionate forbearance
To impart it — know him to be the good Guru.

But if, after trying, one cannot
Find just such a Guru as this,
I will explain another ritual
For taking the vow in a correct way.

In this latter way, Manjusri in a former life
As Ambaraja begat the Enlightenment Thought;
And as told in the sutra called The Ornament of Manjustri’s Buddha-field,
I write it down clearly here now:

“In the presence of the Lords,
I beget The Thought of Perfect Enlightenment,
And issuing invitation to all creatures,
I will save them all from the cycle of rebirth.”

“Beginning from this moment and henceforth,
Until I obtain the Highest Enlightenment,
I shall not permit ill-will or anger,
Avarice or envy, to occupy my mind.”

“I shall practice the Pure Life,
And renounce sin and base desire;
I shall imitate the Buddha
By rejoicing in the vow of Conduct.”

“Myself, I am not keen to reach
Enlightenment in some swift way;
I shall remain until the final end
For the sake of but a single creature.”

“I shall purify the innumerable
Inconceivable fields of the universe,
And from the taking of this [new] name,
[henceforth] I shall live in the ten directions.”

“Purifying the actions of
My body and speech entirely,
I shall cleanse my mind’s activity as well;
No unvirtuous deed will ever be mine.”

In essence, one’s purity of body, speech and mind
Means keeping vows with a mind for progress;
For by practicing well the Three Conduct Trainings,
Appreciation of those same Three becomes greater.

Hence, when one has striven in the vows which make up
The pure and perfect Bodhisattva Vow,
He will bring to complete perfection
The very Equipment for Perfect Enlightenment.

All the Buddhas have held that
Perfecting this Equipment,
The nature of which is Merit and Knowledge,
Lies essentially in the superknowledges.

Just as a bird with unfledged wings
Cannot fly up into the sky,
So without the superknowledges’ power,
One cannot work for the good of others.

The merits which a man with the
Superknowledges gains in a single day
Could not be had in a hundred lives
By one who lacked those knowledges.

He who seeks to bring to perfection swiftly
The Equipment for Perfect Enlightenment
Strives hard for the superknowledges,
For they are not accomplished by sloth.

As long as Calmness is not attained,
The superknowledges will not occur;
Therefore, in order to achieve Calmness,
One must keep striving over and over.

One who neglects the Limbs of Calmness,
Even though he strive to meditate
For thousands of years, never
Will achieve Concentration.

Therefore, when well established in the Limbs
That are stated in the Chapter on Concentration Equipment,
One can then set the mind in virtue,
Fixed on any Topic he chooses.

When yogic Calmness is achieved,
So too are the superknowledges;
But obscuration is not destroyed
Without the Perfection of Insight.

Hence, to remove all obscuration
Of his affliction and his knowledge,
The yogin must continually cultivate
the Perfection of Insight together with Means.

Scripture says that bondage is from
Insight being divorced from Means,
And the Means from Insight as well.
Therefore, neglect not this union.

To remove any doubts about
What Insight is, and what are Means,
I make clear the difference
Between the Means and Insight.

The Victors have explained that
the Means Are all the Equipments of virtue,
Starting with the Perfection of Giving,
Up to, but excluding, that of Insight.

One who combines the mastery of the Means
With a true cultivation of Insight
Will swiftly attain Enlightenment, but
Not by cultivating merely Non-self.

“Insight” is fully explained as knowing
The Emptiness of intrinsic nature,
In comprehending that Aggregates
and Sense bases and Elements do not arise.

An existent’s arising is impossible;
A non-existent’s is like flowers in the sky;
For a thing to be both is absurd fallacy;
So neither do they originate together.

Since an entity does not arise from itself,
And is not from another, or even from both,
Nor is it yet without cause; therefore it has
No intrinsic nature by way of own-existence.

Furthermore, if one analyses all things
As identities or multiplicities,
Own-existence is not perceived; hence one is
Certain that intrinsic natures do not exist.

51 The reasoning of the Seventy Stanzas on Emptiness,
And of texts like the Basic Stanzas on the Middle Way,
Explains the proof that all entities
Are empty of intrinsic nature.

Wherefore, lest my text become too long,
I do not elaborate it here,
But will explain only proven tenets
In order to further contemplation.

Thus, not to perceive intrinsic nature
In any phenomenon whatever
Is to contemplate its Non-Self; which
Is the same as contemplating with Insight.

And this Insight which does not see
Intrinsic nature in any phenomena
Is that same Insight explained as Wisdom.
Cultivate it without conceptual thought.

The world of change springs from conceptual
Thought, which is its very nature;
The complete removal of such
Thought is the Highest Nirvana.

Moreover, the Blessed One declared:
“Conceptual thinking is the great ignorance,
And casts one into samsara’s ocean; but
Clear as the sky is his contemplation who
Remains in Concentration without concepts.”

And he also says in the Non-Conceptual Progress Formula:
“When a son of the Victor meditates on
This holy Doctrine without conceptual thought,
He gradually attains the non-conceptual.”

When through scripture and reason one has
Penetrated the non-intrinsic
Nature of all non-arising phenomena,
Then contemplate without conceptual thought.

And when he has thus contemplated Thatness,
And by stages has attained “Warmth” and the rest,
Then he will gain the “Joyous” [Level] and on up:
Buddha-Enlightenment is not far off.

Through the rites of “Appeasement” and “Prosperity”
And the rest, effected by the force of Mantra,
And also by the strength of the Eight Great Powers,
Starting with that “Good Flask”, and others,

It is maintained that the Equipment for
Enlightenment is perfected with ease;
And if one wants to practice Mantra as prescribed
In the Tantras: Action, Practice, and on,

Then, to gain the Preceptor-Initiation,
One must first win a holy Guru
By giving him attendance and precious things
And by obedience to his word.

And when the Preceptor-Initiation has been
Conferred by the Guru who was won over,
Then one is purified of all sin, and
Becomes fit to exercise the Powers.

The Secret and Insight Initiations
Should not be taken by religious celibates,
Because it is emphatically forbidden
In the Great Tantra of Primal Buddha.

If those Initiations were taken by one who stays
In the austerity of a religious celibate,
It would violate his vow of austerity
Since he would be practicing what is forbidden.

Transgressions would occur which defeat
The man of religious observance;
And by his certain fall to bad destinies,
He would not even succeed [in Mantra practice].

Having acquired the Preceptor-Initiation,
He may listen to all Tantras and explain them;
Perform Fire-offering, Gift-worship, and the like:
There is no wrong in wisdom about reality.

I, the Elder, Dipamkarasri,
Having seen this explanation in texts
Such as the sutras; and Byang-chub-‘od’s request
Have explained concisely the Path to Enlightenment.

This completes the Lamp for the Enlightenment Path Composed by the great Acarya, glorious Dipamkarajnana. Translated and edited by the great Upadhyaya of India himself, and by the revisor-translator Dge-ba’i blo-gros. This text was composed at the Tho-ling temple of Zhang-zhung.

4 thoughts on “Atisha: A Lamp for the Path of Enlightenment”