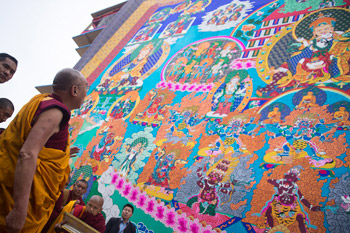 His Holiness the Dalai Lama: The teachings on dependent origination and nonviolence that we find in Buddhism is related with world peace.

His Holiness the Dalai Lama’s continues https://www.sangye.it/wordpress2/?cat=73 his 2013 teachings December 25, 2013 – January 4, 2014 on the 18 Great Stages of the Path (Lam Rim) Commentaries, at Sera Monastery in Bylakuppe, Karnataka, India, see here http://www.dalailama.com/webcasts/post/308-18-great-stages-of-the-path-lam-rim-commentaries—2013 . Translated into English from Tibetan by Mr Tenzin Tsepag. Trascript by Eng. Alessandro Tenzin Villa, first revision and editing by Dr. Luciano Villa within the project “Free Dalai Lama’s Teachings” for the benefit of all sentient beings. We apologize for any possible errors and omissions.

When I meet westerners I speak frankly with them. So, wherever I am, like in this kind of gathering with Tibetan community, I speak honestly, I speak as a human being and not as the Dalai Lama, nor as a Buddhist. I tell people that, if I think that I’m the Dalai Lama, I’m a tibetan, or a Buddhist, actually this distance me from the others.

For example, when I meet the Cristian, if I say I am Buddhist, this create a difference from me and the others. Then if I think that I am the Dalai Lama and should pretend to be dignified and so forth, this create a prison around me and I should be like a prisoner. This I don’t like, I don’t do this. If I should think – I’m a holy person, I’m the Dalai Lama – that my behavior should isolate me from the others, I should be a prisoner.

We all want happiness and don’t want suffering. Therefore, the pain and pleasured that we are talking about, are mainly based on our mind, and they are not based on the physical level like the one of the animals, but on the mental level. So, we human beings, we need to use human intelligence worthy, to practice moral ethic and to have warm hearth. This is the foundation of one’s own happiness.

The foundation of one’s happiness: if you are honest, if you are warm hearted, if you don’t harm others, if you are sincere, then you also are very relaxed, you don’t need to be hypocrite, you don’ need to be superficial, suspicious. If you can be transparent, then you don’t need to be cautious: then you will not have fear. When you have doubt and suspicious, then you have fear and then it will lead to hanger. Because fear and anxiety lead to anger. If you have not fear and anxiety your mind will be relaxed at ease. Whether you are believer or non-believer it doesn’t matter, I always tell people that we need to be good people, I always tell this. As animals we can’t do much. We, as human beings, we can think a lot, and we have languages and scripts, letter. This human intelligence that we have, we can use to bring about happiness: it’s good, it’s meaningful, it’s wise. Otherwise, if we use it to create more problems it’s foolish. The first thing that we have to do is to be warm hearted, honest, not superficial. And then, regarding the believer, I’ve seen a report: over seven billion people, one billion are not believer. As I said earlier, they also don’t want sufferance but they want happiness. Even those who don’t believe in religion can get an happy life behaving like this, they can get it working on their mind. Then they will able to draw happiness.

Some scientist now pone attention to this side of the mind. So we need to pay attention to the hygiene of mind. Six billions are believers of religions, with their philosophical background. One billion plus are Christian, one billion Muslim, Indus and Buddhist maybe half a billion each.

All the major religious tradition in this world have philosophical background, even the theistic religions – like Indus, Cristian and Islam – emphasizes the practice of love and compassion.

One Muslim friend of mine said to me that, if you are real Muslim, there is no way you can damage the others, since Allah is our creator. Therefore, as much respect you give to Allah, to that extend you also respect others. So, all religion teach warm hearth and they also recognize the presence of obstacle to the practice of love and compassion. Therefore, all the religion traditions talk about forgiveness. And, when you become very greedy, then, in the practice of love and compassion, also Indus teach contentment. Also, since all problems are in the mind, all the religions tradition also teach discipline. So, you can see how all the religious traditions are beneficial to humanity. Otherwise, this religious tradition won’t be here. In this 21st century we have very high advancement in technology and science. We still have these religions. And all the religions teach love and compassion. So theistic religion says that everything is created by God, and we should not harm that. Therefore, as God is infinite love, we need to show love towards the creator, and because all humans are created by God, we shouldn’t harm all creatures who are created by God. This philosophical grounds and teachings give us conviction to practicing love and compassion and to promote and burst further and further. I always say that we should keep our faith in one’s own religious tradition, whereas we should respect all the different religions of the world. So, the first point is to be a good person, to have a good life, an honest life. So, this is something that we have in Tibetan community.

People who are familiar with Tibetan way of life, say that many of them actually pray to be honest. And many westerners who know them say that also Chinese do that. And that is said also by Chinese who are visiting Tibet, although Tibetans are suffering in Tibet. I met, one time, a Chinese who said that he went in few days from Beijing to Lhasa by train. He told me that the Tibetans were very humble, moral, and smile all the time. So, this is something that many Chinese tell me. I also know there are a lot of Tibetans who are lying in northern Europe and America, so we have to be very careful, we should behave to preserve the value still we have. I thing that it’s worthy to do that. If we neglect that, the situation is very sad, so it’s very important to preserve that. In Tibet there are people from Western country, others country and Chinese as well.

So I have been hearing from some visitors that in Tibetan rural area there are people who sells things on a very high price to westerners and to the Chinese. So, we have here in the teachings, people from Tibet, who can confirm or not what some Chinese and westerners told me: in some places Tibetans exploit situation to get more money, asking high prices. And so, some Chinese travel agency prefer Chinese tourist guides instead than Tibetan guide: this because Tibetans, when they are actually guiding tourist in Tibet, are very greedy, naughty. Then when tourist see Tibetans misbehaving, in the mind of the tourists comes in mind what they heard, so we have to be very careful. We have some dignity, in the eyes of the people, if we lose it we will also lose the support to our cause. We have to be very careful.

So, who is religious should also practice love and compassion, be honest and helpful to others: this is the second level.

On the first level; we are Buddhist, but on the second level we are people, and we have to behave as a good person.

Among the religions in the world, the teaching on dependent origination, on the dependent nature of the things is found only in the teachings of the Buddha. Buddhism is unique. Of course, in Hinduism we can find teachings on causality, on cause and conditions. But, when it comes to the experience of the creator of this cause and condition, karma and experience of result, then the tradition believe in some kind of independent existence: self, atman or soul. So, Buddhism is the only religious tradition which teaches selflessness. From the philosophical point of view, Buddhism is the only religion that reject self, instead the others religious tradition assert the existence of a self, atman or soul.

I usually say that the essence of Buddhism is two folds: the philosophical understanding of dependent origination and ethical conduct of nonviolence, not harming others.

The practice, when it comes to the ethical conduct, then is nonviolence, which is common to all different tradition as well, the philosophical base is selfless, is dependent origination. In Kamalashila’s commentary to Shantarakshita Tatusangarahapangika based on low of causality we have three different kind of dependence: dependence on causality, designated dependence and then merely or nominal designation. So Buddhism as a all believe in the law of causality: that things come about trought causes and conditions. Dependent origination is something in common with all Buddhism traditions. This is something is very scientific as well, it’s connected with science. Over thirty years I have this connection with scientist, and one of the scientist at 26th Mind and Life conference told me that he isn’t a Buddhist but he actually believe in the past and future lives. So, such people who use reasoning, they actually admire the teachings of the Buddha. So, I usually say that they are teachings on dependent origination and nonviolence that we find in Buddhism is related with world peace.