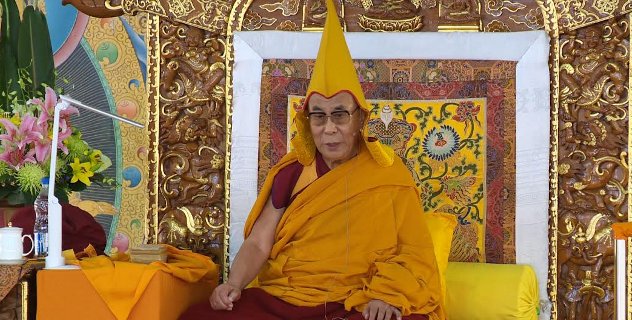 His Holiness the Dalai Lama: This empty nature of the mind is called Buddha nature. When is completely free from defilements, purified, then we reach Bodhi, the enlightenment and therefore we are able to serve other sentient beings effortlessly, spontaneously.

His Holiness the Dalai Lama’s continues https://www.sangye.it/wordpress2/?cat=73 his 2013 teachings on the 18 Great Stages of the Path (Lam Rim) Commentaries in December 25, 2013 – January 4, 2014, at Sera Monastery in Bylakuppe, Karnataka, India, see here http://www.dalailama.com/webcasts/post/308-18-great-stages-of-the-path-lam-rim-commentaries—2013 . Translated into English from Tibetan by Mr. Tenzin Tsepag. Trascript by Eng. Alessandro Tenzin Villa, first revision and editing by Dr. Luciano Villa within the project “Free Dalai Lama’s Teachings” for the benefit of all sentient beings. We apologize for any possible errors and omissions.

And so, if people ask to you what Buddhism is about, you should be able to answer in this way: the main points of Buddhism are nonviolence, ethical conduct and the philosophical view of dependent origination. You that come from Tibet also, keep in mind these two things. Nonviolence it doesn’t mean that you looks smiling when you keep the ill actions in yourself, but it means that, inside yourself, you should be totally compassionate. Whatever you do, you should do very sincerely whiteout any secondary aim, if you are compassionate then your action will be also nonviolent. Nonviolence here doesn’t mean being passive, that you are unable to do anything, helpless. But it means that, even if you have the opportunity to harm somebody, to hurt somebody, you still restrain from that. That is nonviolence. It’s action rooted in compassion. And also the dependent origination, please you keep this in mind.

This is a general presentation of how Buddhist should acts.

All of us, whether we are followers of the Hinayana or Mahayana, we have in common this practice of Vynaia: the monastic or ethical discipline. Some years ago I attended the World Religious Parliament, which was held first in Chicago USA, and in others countries and then also in Australia, in Melbourne, and they invited me. In the discussion two Burmese monks told me that we are both followers of the same Buddha but we have many differences. Generally the Buddhist practitioners are very good practitioners in shamata and vipassana while they are fond on Hinayana practice. So I really respect them. So I got the suspicion that they wanted to refer to Lamaism, a term that was given to Tibetan Buddhism, considering it not as real Buddhism, but a mix of Hinduism and specially tantra. One reason why Buddhism in Tibet is called Lamaism is that when people hear that such person is a lama or tulku, then tend to respect that person much more than people like gesce, scholars or monks. So I was wandering if they were effectively referring to this kind of things.

I met Nelson Mandela when he became the president of South Africa, we came out from the president office and we had a media conference, and he introduced me to the media saying the Dalai Lama is the head of Lamaism and Lamism is good, so he had the concept of Lamaism in his mind.

This is what I thought when the two Burmese monks approached me saying about the differences. “Yes, we have differences” I responded “but the main think, in order to practice Buddha Dharma we have to found it on Vinaya practice: the discipline. So, in regard to discipline, you follow the Teravada tradition and we Tibetans are following the Mulasarvastivada tradition, we have 223 wows.”.

In the Pali tradition the Praktimoksha wows are in less number, 220 and something, with regard with the 4 defeats and 13 remainders, the downfalls to remediate, regarding this 3 set of house there is not too much difference, but in regards to others wows, for example the wows which talks how to wear such ropes, there are some differences. In our tradition there are 7 point mention on how to wear lower garments, in the Pali tradition it’s only mentioned that one should wear the lower garments properly: there is only one precept. So, after having informed them how the Vyanaia practice tell like this, the Burma monks were quite surprise and told me: “Oh you also have this practices!”. Otherwise, when people see that people are wearing some strange ropes this is something quite strange. So, if we could make the three practices, the monastic – by monthly confession and then the summer retreat – then we will be able to show that we are also following the same Buddha, the Buddha’s precepts.

Regarding Mahayana, in Mahayana Sutra Lankara, Maitreya talked about the great qualities of Mahayana. Is not about despising Hynayana, because in Mahayana despising Hinayana Path is considered a transgression of the vows. For practitioners of Mahayana, the practice Vinaya, the practice of Praktimksha wows, even in the Hynayana tradition, must serve as the foundation. So, they also have the practice of Vinaya and cultivation of the 37 harmonies of enlightenments. Then in Mahayana, the main teachings are on perfection of wisdom, in which there are two contents: implicit is emptiness and explicit is progression along the path.

Maytreia text, like Abhisamayālaṃkāra and so forth, deals whit this implicit content of Prajnaparamita sutra. And then, following him, we have master Asangha’s and so forth commentaries and then we have the explicit content of the perfection of wisdom teaching which are explicated by master Nagarjuna and his lineage, the profound lineage, and the other one is the extensive lineage, the lineage of conduct, and so these are the two lineages based on the Prajnaparamita sutra.

Regarding the second turn of the Wheel of Dharma, the perfection of the wisdom teaching, we have the teaching of Sandinimuchana Sutra and then also on Tathagatagarba sutra. Which has become the root text for Maitreya’s Mayanauttharatantra. There is a verse which can found both in Abisamayasutralamkara and in Maytreia’s Mahayana-Uttaratantra. In Abisamayasutralamkara may be understood from the point of view of emptiness, the nature of emptiness of the mind, while in Mahayana-Uttaratantra may be understood as the subject of the mind, the clear light. This is a my view, my opinion, I’m not sure about it.

In this, there is mention of the nine knowledge or nine points related to them, and so is said that the defilements temporary advantages.

The base nature of mind is clear mind, on the base of this teaching we see the possibility to overcoming the negative emotions or the defilements in the mind stream. Then the clear nature of the mind. When there is this quality of cognoscente, awareness, clarity, we have the potential to acquire to total final knowledge. In the Sakya tradition they talk about the causality. The potential for obtaining the Buddha power is inherently in this mind, because the mind is awareness, cognitive and clarity.

And so, we can understand how, on the basis of this, to attain power and so forth of Buddhahood. This empty nature of the mind is called Buddha nature. When is completely free from defilements, purified, then we reach Bodhi, the enlightenment and therefore we are able to serve other sentient beings effortlessly, spontaneously.

So, we have to practice on morality, concentration and on wisdom inside, then the 37 harmony to enlightenment. So these are common foundation. Even in tantra we find relations between the part of mandala with the practice of 37 harmony and so forth. So, in regard with Pali tradition it spread from India to Sri Lankan, Burma, Thailand and so forth. The Sanskrit tradition first went to China from India more than 300 or 400 years before it came to Tibet. Then from China it has spread to Korea, Japan, Vietnam and perhaps there maybe direct contact with India as well, and then in Mongolia there are early signs of Buddhism. This early phase of dissemination of Buddhism may are taken from the same root, but the Buddhism that they have today, is the complete, entire teaching of the Buddha, including Mahayana and Tantra. That is spread in Mongolia, it came from Tibet. So we have countries that follows the Sanskrit tradition. Buddhism came from India into Tibet in the 7th century. The Tibetan emperor Sonstsen Gampo married a prince from China and a prince from Nepal and they took with them a Buddha statue. Unless that Sonstsen Gampo could take Buddhism from China, he took Buddhism directly from India. So there are two different opinions: did Sambhota divided the Tibetan scripts or did he improved what actually existed before him? In any case Buddhism was brought around the 7th century thought Tibet and mainly Buddhism spread to Tibet from China at the time of emperor Trisong Detsen who invited in Tibet Guru Padamsambava, called by Tibetans as Guru Rinpoche, and then Shantarakshita the abbot kempo. Through them Buddhism flow into Tibet, so we have the complete teaching of Buddhism up to the highest yoga tantra. So Shantarakshita was responsible for establishing of Buddhism in Tibet and he has retained text from highest yoga tantra. So, it’s sure that he was practicing tantra. Then he gave monastic ordination, starting with seven novice monks. Some Indians historian said that Shantarksthia was around 70 years old when he arrived in Tibet. Tibetan historian said that Shantarakshita lived for one thousand years. Indian scholars told me that Shantarakshita lived for 90 years and Tibetan historian added a zero and made 900, and so we have the remains of Shantarakshita’s body in Samye. Tibetan devotes were able to hide Shantarakshita’s body which is preserved in Samye monastery and it’s still there.

We can actually check forensic science on how long Shantarkshita lived. Recently in two urn in Afghanistan were found Buddhist relicts dated 2.6000 years ago. This check can help to find the data of Buddha.

So, many of you has heard me saying that Nagarjuna, Shantideva, Bhavaviveka and so forth argue that Mahayana is a teaching of the Buddha. In Taiwan and Korea there are someone saying that Mahayana is not actually the teaching of the Buddha. They are not to be blamed because they don’t say that Mahayana was not taught by the Buddha in public. Regarding the teaching of the Four Noble Truths, even if someone, without any religious believe, were going around where Buddha were giving teachings, of course may be he was able to see that the Buddha is there giving teaching. Then we see in the sutra are mentioned many different bodhisattva, such as Manjustri, Vajrapani, Avalokitesvara, Samantabadra, Maitreya, Vajrapani and so forth.

But, when it comes to give teaching, if someone who had no the right karma, no believe in some kind of spiritual tradition, I don’t know if they can even see the Buddha given teaching or not. So, in the Hearth Sutra we have the dialogue between Shariputra and Avalokitesvara. While this dialogue would have taken place with somebody without the pure karma he would see that Shariputra were probably talking to himself.