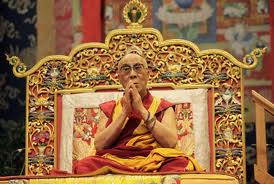 His Holiness the Dalai Lama: All the different Buddhist Tibetan traditions have the same practices on the Buddha

His Holiness the Dalai Lama continues https://www.sangye.it/wordpress2/?cat=73 his 2013 teachings on the 18 Great Stages of the Path (Lam Rim) Commentaries in December 25, 2013 – January 4, 2014, at Sera Monastery in Bylakuppe, Karnataka, India, see here http://www.dalailama.com/webcasts/post/308-18-great-stages-of-the-path-lam-rim-commentaries—2013 . Translated into English from Tibetan by Mr. Tenzin Tsepag. Trascript by Eng. Alessandro Tenzin Villa, first revision and editing by Dr. Luciano Villa within the project “Free Dalai Lama’s Teachings” for the benefit of all sentient beings. We apologize for any possible errors and omissions.

The fact is that Mahayana teachings there were not giving in public and they have not been recorded. Bhavaviveka said that Mahyana teaching were compiled by Manjustri and others deities, but not by humans. Within the Mahayana teachings, there are some that was given in large assembly and others which were given very secretly: the tantric teaching, the esoteric teachings. Particularly the highest yoga tantra and, in general, all the tantra are gived in according with the ideological structure of the practitioner as well – in the body, remember that are gived these teachings in the highest yoga tantra, the number of different channels and chakra in different tantra are different: in Guyasamaja tantra and in others tantra are different. So, when the practitioner had this kind of pure vision, then thought their own spiritual development, progress, then the deities appear to them. And then they receive the teachings. These teaching were given to people with pure karma. For example, in the case of Prajinaparamita sutras, among the audiences, they may be deities from the Amithaba’s Pure Land and so forth.

So, the Tibetan Buddhism, which still extend today and has the entire teaching of the Buddha, came to Tibet in 8th century with the help of king Trisong Detsen, master Shantarakshita and Guru Padmasambhava. And this tradition, that we have preserved so far with regular studies and practice, we have studied for many years to memorize the root texts, commentaries and then we undertake the study on them. They also memorize commentaries. The entire teaching we have preserved through both study and practice. Therefore there are many people who have devoted their life to this practice, to this entire teaching of the Buddha that we have preserved and promoted until now: though both study and practice. So, this is only extend in Tibetan Buddhism. Today it’s said that there are 4-500 million Chinese who are followers of Buddhism: a huge number.

So, among all the different followers of Buddhism, the only one who preservers Buddhism combining both studying and practice is only Tibetan Buddhism. We have to feel proud of us. We can also study the all teaching of the Buddha in our own language. We can completely explain the philosophical view of Buddhism in our language, without needing resources in others languages. So, we Tibetan living in different countries, must pay attention and take interest in our own language. There is no greater language then our own Tibetan language to explain the philosophical view of the Buddhism, the Sanskrit isn’t a living language, and in another language it has to be translated. So we have to see this as our own treasure and also as a treasure, an heritage of this world as well.

So all of us we don’t want suffering and we want happiness.

Among the different religion tradition we are following Tibetan Buddhism, particularly Sanskrit tradition, which come from Nalandra, so we are followers of Nalanda tradition.

After Buddhism came in Tibet in 7th century, established well in 8th, 9th century, then after that Buddhism declines, which is quite said. So in 7th, 8th, 9th centuries Tibet was united and some historian refer Tibet as Tibet, and says that at the east we had China, at the north Mongolia and south to Mongolia tere was Tibet. These scholars used these terms based on Chinese documents. After the 9th century Tibet became fragmented. So Tibetan were helped to get united by Buddhism. Then, the descendent of the Tibetan kings they ruled the western part of Tibet, a very small part, but they were dedicated to revive Buddhism as already spread during the time of their ancestors, therefore Buddhism revived in Tibet, they found Vikramashila, one of the main centers of learning Buddhism. So of course they were followers of the Nalandra tradition. At that time, at 11th century Buddhism flourished in Vikramashila and Ngari King Yeshe ‘O invited Atisha Dipankara in Tibet. As Atisha says in his “Lamp for the path to enlightenment” as request by his good disciple Yeshe ‘O, who was imprisoned by Garlok king at that time. When his nephew Cianciub ‘O went in search for gold in order to ransom his uncle Yeshe ‘O, he got a quite huge amount of gold, but Yesce ‘O replied “You should focus to invite Atisha in Tibet, instead than offer the gold for my freedom”. Yesce ‘O sobbing said: “I trust you to revive Buddhism in Tibet, developing further: this is my testament to you and I have no other wishes, I want this wish for you. You don’t need to pay the king of Garlok to get me out the prison”. So Cianciub ‘O invited the master Atisha who said “I must accept the invitation because the Tibetan King, specially Yesce ‘O, is an emanation of a bodhisattva”.

When Atisha reached Tibet, Tibetans actually received him wearing some kind of costumes, so that, when Atisha saw them, he covered himself with the upper robe, Cianciub ‘O asked. “What’s the matter?” and Atisha replied: “Oh! There are demons coming against me”. The monks and dignitary removed their grand costume and invited and received Atisha and then Atisha started to going with them. So, we have this costume, grand costume, to wear over the clothes, blue patch, called “talent”, that means “what is wearied by the head”.

If you want to be a ruler, a real master to other people, you should be educated in Tripitaka, not in wearing strange ropes. So we have really done mistakes by don’t be sincere in what we are doing in term of dharma practice.

When I left Tibet, I brought one shirt which has brocade, lining, which I gave to others who used the brocade to make clothes for a Buddha statue. So the Namgiar that I had was made by brocade, so I washed and I put on the Jowo and I made by myself a new Namgiar with yellow robe in fabric material. And then, regarding hat, I’m not so amazed of a grand kind of hat, I’m not so fond of the hat that we wear. If you look at the Indian masters, the 17 Nalanda’s masters and so forth, we don’t really see Nalanda’s masters wearing hats. They don’t have this tradition of wearing hats. So, as Tibetans wear hats, they also made this custom to wear hat on Indian masters. .. Second tradition: when master Kunciuk Gyaltzen, Sakya tradition, when he met Taranata, he made painting of the eight masters, who are called the six ornaments and two sublime masters. And then Kunciuk Gyaltzen painted this master with an hat, he put a Ghelupa hat, almost making these Indian masters as Ghelupa masters. So, as Gelupas, for example, we have Lamrim, Lojong tradition and also the king of tantra, Guyasamaja. We should actually be able to show the greatest of tour tradition through these practices and not on the basis of our hats. So, because I have emphasized so much on wearing the hat, we have these names for Buddhist Tibetan tradition of Yellow Hat, red Hat and so forth. But this isn’t what you want.

What I wish to say is that Ngari Ciogyul King invited Aitsha.

Regarding the “Three stages of meditation” http://www.sangye.it/altro/?p=433 , Kamalashila wrote these three books at the request of Tibetan king Trisong Detsen who ruled the all of Tibet, which is one of the three countries named as “Ya” for China, “Co” for Mongolia e “Po” for Tibet. So king Trisong Detsen was determined to request to master Kamalshila to write the “Three stages of meditation” and then he wrote it. So the Kadampa tradition emphasizes the practices of Lam Rim, and Lojong practices, as at that time tantra was misused by a lot of people, and, in order to keep tantric practices secretly, so they emphasizes the sutra tradition. At that time, when Atisha came to Tibet, tantric practitioners despised Vinaya and the monastic, so Atisha showed how to combine both sutra and tantra, as it was already established by the ancestors king of Tibet. So Atisha had both the profound and extensive lineage of the Lamrim.

This came down through the three lineages of the Kadam tradition and then, thought the three lineages again, because they includes both the profound and extensive lineage. Then Tsong Khapa received the three lineages from the Kadam tradition. Before master Tsong Khapa, there were texts like “Ten Rim or Stages of the Doctrine” and other texts like the Stages of the Path to Elinghtenment, and Lama Tsong Khapa used these texts as basis and then he wrote the Lam Rim Chemno, Lam Rim Demno and the Concise Lam Rim. These three we already finished last year. After Atisha wrote the Lamrim or “Lamp to the Path to Enlightenment”, perhaps there was a tradition before that, but Lonchempa Rinpoche wrote the “Seven Treasures” in which is explained Lamrim, specially Sem Gny Gyalzo “Resting in the nature of the mind” is exactly like the lamrim practice (I received teachings on it and instructions on it), also in the Sakya tradition the teaching of the Three Vision is similar to Lamrim, and Gyu Sum or the Three Continuum like the highest Yoga Tantra Hevajra tantra, in the Kargyu tradition we have Marpa, Millarepa and Thapo Lache then Gampopa wrote Thapo Dargyen or “The true ornament of liberation” which is said to combine the two rivers of Kadam and Mahamudra. So, this start actually teaching on Buddha nature as Trichang Rinpoche told me, Sharawa has written a text which start a teaching on Buddha nature. And so, all these Buddhist traditions have same Lamrim practices which are main for the three types of beings.

And so, all the different Buddhist Tibetan traditions have the same practices on the Buddha, leaving disciples on Lamrim practices for the three types of beings. So the Buddha teaching are comprised in Tripitalka, and so we have Tripitaka also in the Pali tradition. The content of all this Tripitaka are brought down into the practices pertaining to the three types of beings. And so, this Kadam tradition: Dromtompa has praised that this Rosary of Kadam tradition, which comes from Tripitaka, is beneficial to any sentient being.