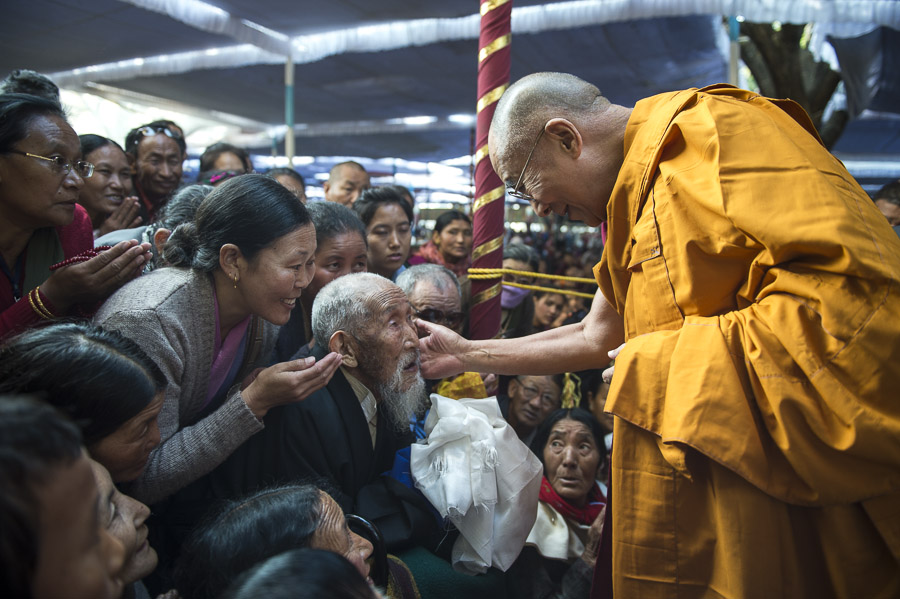 His Holiness the Dalai Lama’s continues https://www.sangye.it/wordpress2/?cat=73 his 2013 teachings on the 18 Great Stages of the Path (Lam Rim) Commentaries in December 25, 2013 – January 4, 2014, at Sera Monastery in Bylakuppe, Karnataka, India, see here http://www.dalailama.com/webcasts/post/308-18-great-stages-of-the-path-lam-rim-commentaries—2013 . Translated into English from Tibetan by Mr. Tenzin Tsepag. Trascript by Eng. Alessandro Tenzin Villa, first revision and editing by Dr. Luciano Villa within the project “Free Dalai Lama’s Teachings” for the benefit of all sentient beings. We apologize for any possible errors and omissions.

And so how to go about with these practices, Aryadeva has said in his “Four hundred verses”: “First get rid of the non-virtue actions, then, in the middle, get rid of the grasping to self, finally destroy all distorted views. If such a person is able to do this is wise. By refraining ourselves from committing non virtue actions, we create the root to get higher rebirths, and then, if we act in the practice of generosity and so forth, it leads to higher rebirths as well. With regarding to grasping to self, the second line of Aryadeva’s “Four hundred verses” says: “In the middle get rid of self-grasping”.

So, here we can talk of the selflessness of person with the purpose of obtaining liberation from afflictive emotions. Then meditation on emptiness is done to fulfill the complete purpose to cultivate both realization of selflessness of a person and of selflessness of the phenomena. As Lama Tzongkhapa says in his text “The ocean of reasoning” as in Nagarjuna’s Mulamadyamykakarika: “We have to know the emptiness in a great details by using scientific discernment”. Also in Hinayana text is taught emptiness, but in the way that it was taught in the Mahayana sutra is more extensive by using a huge variety of reasoning.

So first avoid non meritory actions, second avoid grasping to self, third finally get rid of distorting views, so realizing selfness. So, in the text Three Principle Aspects of the Path, Lama Tzong Khapa explains the four ways to turn our mind away from samsara, whereas in the Lamrim text it go thought outlines: having developed the aspiration to get higher rebirths and showing the means to attain that. In the second outlines come the teaching on how to get higher rebirths. The law of karma is taught there. So, this is a general presentation.

In terms of sequence I will start with “The essence of refined gold”.

It was seen in Bodgaya in that time, Rinpoche told me: “I have a dream that someone, who claim to be a relative to third Dalai Lama, came to give me a blue scarf”: I told to Rinpoche that it’s a good sign. The second and third Dalai Lama are the great masters who spread the Buddhist teachings to Central Tibet also to Mongolia and to the eastern part of Tibet; and was the third Dalai Lama who mainly spread the Budda’s teachings and also he wrote one of the Dalai Lama’s texts: so I feel close to him. So, actually “The essence of the refined gold” and “The secret precious votes of Manjustri” are a pure commentary of the sutra. First I will go through “The essence of the refined gold” then followed by “The secret precious votes of Manjustri”.

And Ken Rinpoche says: “Even if you are not able to meditate and visualize everything, joust mentally, if you think one by one, it’s more difficult and you need your own concentration, but, if you do only with your mouth, you aren’t able to concentrate completely on topic. So, the main point that you need is to think to all the teachings, in sequence, every day.

It’s not just transmission that you have heard, but It’s something that you have to generate in your mind. For generating your mind for enlightenment, you need to practice the teachings as much as possible and try to focus about.

It’s eleven thirty now, so we start a bit on “The essence of refined gold, an explanation to the path to enlightenment”.

When we speak about the path to enlightenment, the path is a mean that brings you to high realizations, till the enlightenment state. But when we speak on the path we should refer to our mental state, which always desire happiness and don’t want unhappiness, to the one which is always under the influence of the afflictive emotions and which has the potential to change and become free from all hindrances. One’s able to generate such a mindful liberation, one should be able to generate the understanding of no-self and so, having the basic understanding of no self, can reach further the direct realization of no-self and gradually the path of direct seeing the truth comes.

What we normally recite in Hearth Sutra “that’s gone, gate gate”, one should be able to generate oneself in terms of Mahayana. If somebody is under the afflictive emotions should visualize in such a way that all mental states are progressing from lower path to higher path. This is really important, that we have to think every day about, every day.

Lamrim is an especially profound aspect of Dharma, for it is a tradition of practice sound in origin. It has neither fault nor shortcoming, for it is a complete practice perfectly uniting both method and wisdom aspects of the path. It provides all levels and grades of the techniques passed through Nagarjuna and Asanga, from the practices meant for beginners up to and including the final practice before full Buddhahood, the stage of non-practice.

This graduated Dharma of taintless origin is like the wish-fulfilling gem, for, through it the infinite beings can easily and quickly accomplish their purposes. Combining the rivers of the excellent teaching of both the Fundamental Vehicle and Great Vehicle scriptures, it is like a mighty ocean.

When we speak about the means of transforming the mind, in the greatest text we have at first the refuting the other systems and debates and arguments related ti it. But here it’s presented in a concise manner. It’s something that can be practiced easily.

And Lama Tsong Kahapa explained seriously in the Great Treatise of Path to Enlightenment that there is not a teaching that is to be imparted to others and by something other is to be practiced. If we consider these two things, these things as unrelated, we can make mistakes.

From the path to the accumulation of the great omniscience, the path that leads so, to teachings that, concludes into two 200 canons of Kangyur and 200 canons of Tengyur, apart of these great texts of the Buddha, if we look to another source of teaching to be practiced, that isn’t true instructions.

Because instructions doesn’t means something which passes from one person to another but something which passes from one person to another all the essence of the great texts, and can be summarized, suitable to be practiced by one’s own. This is called the instruction. In the Paramita text and the Sutras, everything have been explained in extensive manner, but one should be able to combine and summarize all those essence and summarize into one form, which could be used for practice, which we call instruction. So, even though you are very much trained in the instructions but if you aren’t able to understand the great text, that may be is your own fault or maybe is the text or instructions are non-clear. In these case you should leave the instruction but you aren’t allowed to leave the great texts.

Many people here feels not to understand the great texts and prefer to refer to summarized instructions. Or maybe someone says: I really cannot understand this text, I need to summarize it.

And this is something considerable and something good.

Someone from China, recently and some masters and lamas who come from Tibet and one of the student of this master met another Chinese. The master gave the teaching ordinarily in sequence. At the conclusion of teachings the student said: “You teacher, when I received your teachings, I need to think a lot, I need to contemplate a lot and there are a lot of things to do. When I take teachings from my guru not so much votes are related, and I can easily take it, my teacher says “I will take you to the enlightenment, bring me money and I will bring you directly to the state of the enlightenment”. So, this is really displease and is really a bad example. So if you think that you don’t need to study or practice in order to reach the state of enlightenment this is really a big mistake. And we have to be very careful about such instructions. Lama Tzong Khapa says: “Apart from Lord Buddha, who can give the supreme instructions?

His teachings are extensive instructions. So therefore once should never neglect the content of the great texts othervise he will gain a lot of negative karma as a result of it and it also results in decline of the Buddha teaching in this world.

Revealing the principal points of both the Sutrayana and Vajrayana, it is a complete tradition with complete teachings. Outlining the main techniques for taming the mind, it is easily integrated into any practice, and, being a teaching combining the lineages of Guru Vidyakokila, a sage of the Nagarjuna School, and Lama Serlingpa, a sage of the Asanga School, it is a precious ornament. Therefore, to hear, contemplate, or meditate upon a Lamrim discourse is fortunate indeed. Je Rinpoche’s Song of the Stages on the Spiritual Path says:

From Nagarjuna and Asanga,

Banners unto all humankind,

Ornaments amongst the world’s sages,

Fulfilling all hopes of practitioners.

It is a wish-fulfilling gem,

Combining the streams of a thousand teachings,

It is an ocean of excellent guidance.