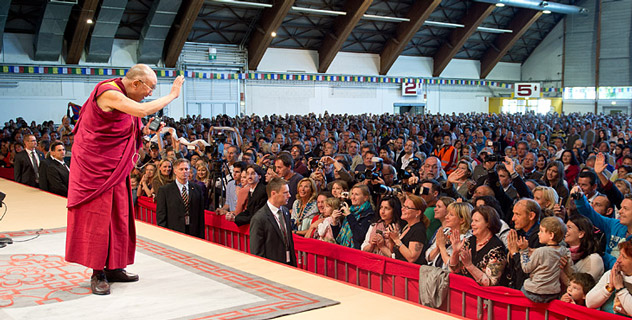 His Holiness the Dalai Lama in Klagenfurt

Fourth part of His Holiness the Dalai Lama’s teachings in Klagenfurt Austria May 18-20, 2012 translated from Tibetan into English by Mr Tenzin Tsepag. Trascript by Dr. Peter Lawrence-Roberts, first revision and editing by Dr. Luciano Villa within the project “Free Dalai Lama’s Teachings” for the benefit of all sentient beings. We apologize for possible errors and omissions.

His Holiness the Dalai Lama – The Song of the Four Mindfulnesses http://www.sangye.it/altro/?p=4680

This test came initially from Lama Tsong Khapa and then went to the first Dalai Lama who passed it down.

On the unwavering cushion of the union of method and wisdom
Sits the kind Lama who is the nature of all protectors.
There is a Buddha in the state of culmination of realizations and cessations.
Beseech him in the light of admiration, through casting away critical thoughts.
Don’t let your mind go astray, but place it within admiration and reverence.
Through not losing mindfulness, hold it within admiration and reverence.

In unending samsara, the prison of suffering, Wander the sentient beings of the six realms, bereft of happiness.
They are your parents, who reared you with affectionate kindness.
Meditate on compassion and affection by relinquishing attachment and aversion.
Don’t let your mind go astray, but place it within compassion.
Through not losing mindfulness, hold it within compassion.

In the celestial mansion of great bliss, joyous to sustain,
There exists the divine form of your body which is a purified state of the aggregates.
There is a deity in the nature of union of the three divine bodies.
Don’t view it as ordinary, but train in divine dignity and immaculate appearance.
Don’t let your mind go astray, but place it within profundity and clarity.
Through not losing mindfulness, hold it in an attitude of profundity and luminosity.

The third recalls one’s own body as a deity body. When we are able to free ourselves from the self-cherishing mind through meditation on bodhicitta there is a feeling of great joy that arises due to becoming free of self-grasping.

The fourth verse consists of two paragraphs. The first paragraph describes meditative equipoise. All solid appearance completely disappears. In the second paragraph we come out of meditation and things and events appear as having intrinsic existence. However, because of our earlier meditation, covered in the first paragraph, we understand that this is the appearance but not the reality.