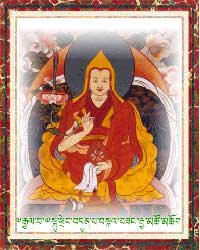 A Song of the Four Mindfulnesses as a Guide to the View of the Middle Way by Kelsang Gyatso, the Seventh Dalai Lama

On the unwavering cushion of the union of method and wisdom
Sits the kind Lama who is the nature of all protectors.
There is a Buddha in the state of culmination of realizations and cessations.
Beseech him in the light of admiration, through casting away critical thoughts.
Don’t let your mind go astray, but place it within admiration and reverence.
Through not losing mindfulness, hold it within admiration and reverence.

In unending samsara, the prison of suffering, Wander the sentient beings of the six realms, bereft of happiness.
They are your parents, who reared you with affectionate kindness.
Meditate on compassion and affection by relinquishing attachment and aversion.
Don’t let your mind go astray, but place it within compassion.
Through not losing mindfulness, hold it within compassion.

In the celestial mansion of great bliss, joyous to sustain,
There exists the divine form of your body which is a purified state of the aggregates.
There is a deity in the nature of union of the three divine bodies.
Don’t view it as ordinary, but train in divine dignity and immaculate appearance.
Don’t let your mind go astray, but place it within profundity and clarity.
Through not losing mindfulness, hold it in an attitude of profundity and luminosity.

Instructions for Meditation on the View of Emptiness

1 Mindfulness of the Guru

On the seat of the immutable union of method and wisdom

Sits the kind guru who is the entity of all the refuges,

A Buddha who has perfect abandonment and wisdom is there.

Forsaking thoughts of defects, make a petition with pure perception,

Not letting your mind stray, place it within admiration and respect,

Making your attention unforgetful, maintain it within admiration and respect.

2 Mindfulness of the Altruistic Aspiration to Highest Enlightenment

In the prison of the suffering of limitless cyclic existence

Wander the six types of sentient beings bereft of happiness,

Fathers and mothers who protected you with kindness are there.

Not letting your mind stray, place it within compassion,

Making your attention unforgetful, maintain it within compassion.

3 Mindfulness of Your Body as a Divine Body

In the divine mansion of great bliss, pleasant to feel,

Abides the divine body which is your own body of pure aggregates and constituents,

A deity with the Three Kayas inseparable is there.

Not conceiving yourself to be ordinary, practice divine pride and vivid appearance,

Not letting your mind stray, place it within the profound and the manifest,

Making your attention unforgetful, maintain it within the profound and the manifest.

4 Mindfulness in the View of Emptiness

Throughout the circle of appearance and occurring objects of knowledge

Pervades the space of clear light, the nature of phenomena, the ultimate,

An inexpressible mode of being of objects is there.

Forsaking mental fabrications, look to the entity of immaculate emptiness,

Not letting your mind stray, place it within the nature of phenomena.

Making your attention unforgetful, maintain it within the nature of phenomena.

Is seen the confusion of the baseless phenomena of duality,

The illusory spectacles of a deceiving magician are there.

Not thinking they are true, look to their entity of emptiness,

Not letting your mind stray, place it within appearance and emptiness,

Making your attention unforgetful, maintain it within appearance and emptiness.

These instructions on the view of emptiness for one who uses the four mindfulnesses, special instructions actually bestowed by the holy Manjughosa on Tsong Khapa, a king of doctrine, were composed by the Buddhist monk Lozang Kaysang Gyatso for the sake of his own and others’ establishing predispositions for the correct view.

In retrospect, the Tibetan believed that Tsangyang Gyatso predicted his own rebirth at Lithang in Kham when he wrote this song:

White crane, lend me your wings,
I go no farther than Lithang,
And thence, return again.

Sure enough, the Seventh Dalai Lama was born in 1708 to Sonam Dargya and Lobsang Chotso in Lithang, two years after the disappearance of the Sixth.

Thupten Jampaling Monastery, which was founded in Lithang by the Third Dalai Lama, was astonished by the wonders of the child and also the state oracles of Lithang had predicted that the newborn child would be the reincarnation of the late Dalai Lama. However due to the turbulent political situation, they could not escort the new Dalai Lama to Lhasa, and he was taken to Kumbum monastery, where he was ordained by Ngawang Lobsang Tenpai Gyaltsen.

In 1720, he was enthroned in the Potala Palace and he took the novice vows of monkhood from Panchen Lobsang Yeshi, who gave him the name Kelsang Gyatso. In 1726, during the auspicious month of Saka Dawa, he took the Gelong vows (full ordination) from Panchen Rinpoche. He sought the tutor of Panchen Lobsang Yeshi, the Abbot of Gyumey monastery and the Abbot of Shalu monastery, Ngawang Yonten, from whom he studied the entire major Buddhist philosophical treatises and became a master in both the sutra and tantra.

In 1751, at the age of forty-three, he constituted the ‘Kashag’ or council of ministers to administer the Tibetan government and then abolished the post of Desi, as it placed too much power in one man’s hand. The Dalai Lama became the spiritual and political leader of Tibet. At the age of forty-five, he founded the Tse-School in the Potala Palace and built the new palace of Norling Kalsang Phodrang. The Seventh Dalai Lama was a great scholar and wrote many books, especially on the tantra. He was also a great poet who, unlike Tsangyang Gyatso, dwelt on spiritual themes. His simple and unblemished life won him the hearts of all Tibetans. He died in 1757.

One thought on “Song of the Four Mindfulnesses”