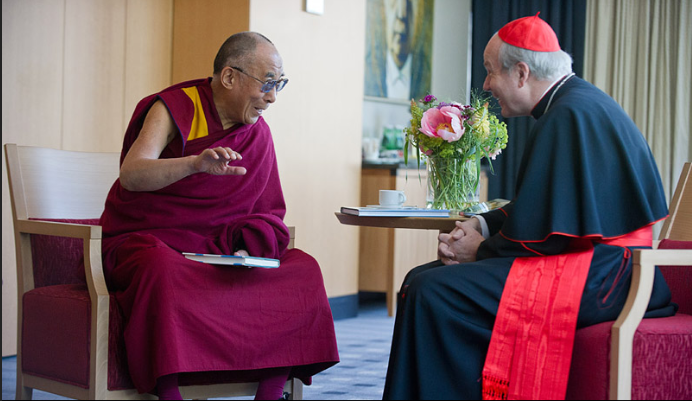 Salzburg 21 May 2012 – Interreligious Dialogue with His Holiness the Dalai Lama: World Peace and Universal Responsibility

In modern times we are far more interdependent than in ancient times. East needs West, South needs North etc. We need to adopt the concept of ‘we’ to embrace all human beings.

We can keep our own identity but also think of the common interest. This is the underlying principle of the EU. We are all human beings so we should think about the common goal. We must think holistically, about the oneness of all humanity. Economically, ecologically we are all now globally interdependent.

Once we develop the global concept of ‘we’ all basis of conflict disappears. When disagreements arise within ‘we’ then dialogue is the only option.

In 1996 HHDL met the Queen Mother and asked her whether after 96 years she thought the world was getting better or worse. She said ‘better’ without hesitation because of the advance of human rights and self-determination. When she was young these concepts did not exist. There is sufficient reason for optimism. With determination and self-confidence we can overcome problems. A pessimistic attitude is the source of failure. HHDL lost his freedom at 16 and lost his country at 24. There has now been more than 50 years of destruction in Tibet. It is very easy to be pessimistic and to feel anger and sadness. However, if the situation is considered from all angles there are some real advantages too.

On a recent trip to Hawaii HHDL heard a lovely saying: ‘Your blood is my blood, your bones are my bones.’ That means that my happiness is your happiness and your sadness is my sadness.

If we are open, honest and transparent and have a sense of concern for the well-being of others, then peace will come.

All humans, believers and non-believers, have the potential for love and compassion. A calm mind is always essential in order to be objective, whatever we are seeking to achieve or understand.

If force is used to bring about our objectives then this brings fear. To achieve harmony you need trust. Fear and trust never go together. HHDL related how the Chinese Government refer to him as a ‘demon’. He says it’s fine to blame him. ‘They need someone to blame so I can serve them in some way. They need some kind of enemy.’

‘In 1974 we decided that we needed to talk to the Chinese Government even though they were in the midst of the Cultural Revolution. History is the past but we have to look forward to the future and be realistic. We are attracted to the spirit of the EU. It is in our interest materially to remain part of the PRC. There is a much greater likelihood of progress and material development.’

Much advanced Buddhist philosophy and psychology is only available in the Tibetan language.

China belongs to 1.3 billion Chinese and not to the Chinese Communist Party.

I consider supporters of Tibet not to be pro Tibetan, but to be pro justice.

Things are interdependent. There is no such thing as absolute justice. Justice is the best outcome for the maximum number of people.

Differences will always be there. That is realistic. Dialogue is necessary, it is the only way. In September 2001 after 9/11 HHDL expressed a wish to meet Osama Bin Laden. ‘He is a human being. His mind is very troubled. We need to listen and understand. If we don’t listen to one Bin Laden soon there will be ten or a hundred Bin Ladens’.

Resistance needs to be peaceful – demonstrations, appeals, expressing views, dialogue. We can make use of the rule of law and a free press.

The media should be like an elephant with a long nose to sniff out what is happening in front and behind issues and to give the full facts.

Despite big philosophical differences between the worlds religions they all have the same fundamental aim – to promote love, compassion and peace.

Buddha taught different approaches to people of different mental dispositions, but always with the same goal – to develop love and compassion.

Since 1975 HHDL has been working in four ways to promote religious harmony:

We can have a firm faith in our own belief but still a great respect, admiration and appreciation for other faiths. These two can be practised simultaneously.