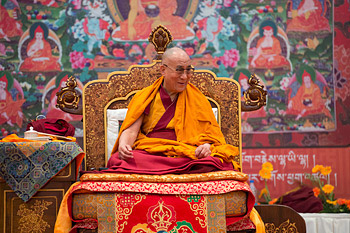 One of the principal reasons why His Holiness the Dalai Lama advises against this practice is because of the well-documented sectarianism associated with it.

Clarifying His Holiness the Dalai Lama’s Stand on Dolgyal/Shugden

12 July 2015
On 7th July, the final day of official celebrations of His Holiness the Dalai Lama’s 80th birthday in Orange County, California, representatives of the Office of His Holiness the Dalai Lama (OHHDL) invited the International Shugden Community (ISC) to meet and explain what they are accusing His Holiness of lying about. The office is concerned that many among the Shugden protestors may be poorly informed about the Shugden issue and His Holiness’s stand with regard to it. The office’s intention is less to try to convince those who already understand the issue but continue to protest, and more to reach out to those who have been misinformed about it. Three senior ISC members came and reiterated their allegation that His Holiness has banned the practice of Dolgyal/Shugden. This is untrue. The OHHDL representatives explained that although His Holiness has for forty years advised against propitiating Shugden, he has always been consistently clear that, in the end, it is up to individuals to choose whether or not to follow his counsel.
Indeed, some monks from two Geluk monasteries in southern India who chose to continue their Shugden practice have set up their own monasteries, Shar Ganden Ling and Serpom Dratsang. These monasteries exist as part of their respective Tibetan settlements in south India and the members enjoy all the rights and facilities to which the residents of the settlements are entitled.
One of the principal reasons why His Holiness advises against this practice is because of the well-documented sectarianism associated with it. In the past, Shugden practice, especially in Eastern Tibet, provoked widespread distrust between monasteries, prevented members of the Geluk school from receiving instructions belonging to the Nyingma tradition, and even led to desecration of religious images and scriptures. His Holiness considers this kind of divisiveness and disharmony to be deeply regrettable. As someone who actively promotes inter-religious harmony and understanding, he opposes discrimination against anyone on grounds of faith.
A clear understanding of the Shugden question requires objective study of its nearly 400 year controversial history, especially the way it unfolded in the early years of the 20th century. His Holiness the Dalai Lama feels a moral responsibility to advise his followers against Shugden practice. In so doing he is following the example of his distinguished predecessors, especially the Great Fifth and the Thirteenth Dalai Lamas.