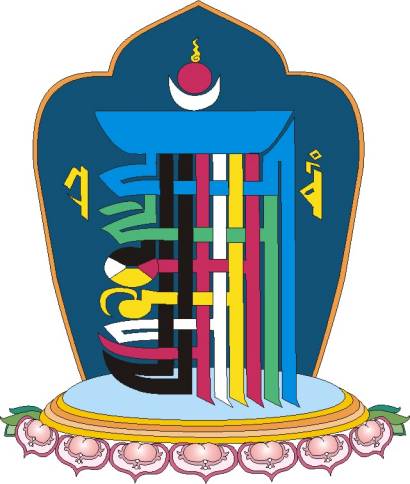 As mentioned above, the mantra begins with the four syllables OM AH HUM HOH. They symbolize the vajra body, vajra speech, vajra mind and the vajra wisdom. In Tibetan, the letter HUM, which represents the vajra mind, is composed of the body of the letter HA with, below, the small ‘A and the U, and above the moonlike crescent indicating OM with the nada. OM symbolizes the vajra body, whereas the nada represents the AH -vajra speech- arising from emptiness -the vajra wisdom. Within that one syllable we have, in a condensed form, all four vajras and a symbol for OM AH HUM HOH.

By meditating in accordance with the development stages of the Kalachakra tantra, the meditator purifies his body and manifests the vajra body (symbolized by OM). Similarly, AH represents the purified speech and the manifestation of vajra speech, HUM signifies the purified mind and the manifestation of vajra mind, and the manifestation of the subtle mind of the practitioner is vajra wisdom and corresponds to HOH. The purified body, speech, mind and subtle mind manifest as vajra body, vajra speech, vajra mind and vajra wisdom, and are symbolized by OM AH HUM HOH. The subtle mind is the subtlest aspect of consciousness. Consciousness manifests in different forms – coarse, fine, subtle, and subtlest. The subtlest form of consciousness is called vajra wisdom. This is one way how the meditation on the syllables can be conducted.

HAM KSHAH and MA are representations of the two main deities, Kalachakra and Vishvamata, as well as the inestimable mansion.

The explanation of these ten different aspects of the mantra is quite difficult to understand since it is a very condensed form of description; its origin dates back to the ancient Indian scriptures. This will be sufficient as a small glimpse on the ten aspects of the ten syllables of the mantra.

In its original Sanskrit, the short version of the mantra contains ten syllables. The letters HAM KSHAH MA LA VA RA YA are written in a stacked way, as can be seen in the Kalachakra symbol. This depiction is crowned by a white moon crescent, a red sun and, topmost, a flame. When counting the seven letters together with the moon, sun and flame, then there are ten seeds. This is why the Kalachakra symbol or seed syllable is called ‘The Ten Powerful Seeds’ (rnam chu dbang ldan). The whole seed syllable is multicolored, whereas each letter has its own color: HAM is black or dark blue, the following KSHAH is green, the multicolored square is MA, the next yellow letter is LA, then white is VA, the red letter is RA, and YA is dark blue or black.

These explanations originate from Kirti Tsenshab Rinpoche’s visit to Graz, Austria in September 1999 to Buddhist center She Drup Ling. This was the first of a series of events in preparation to the Kalachakra initiation of His Holiness the Dalai Lama in October 2002 in Graz. Translator: Peter Roberts, transcript: Michaela Puntigam