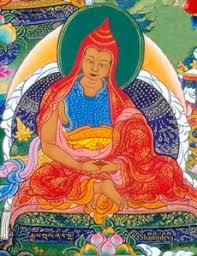 Shantideva (8th century) was the Indian source for the bodhisattva teachings found in all traditions of Tibet, especially regarding the practice of the six paramitas (the six perfections).

Shantideva was born in the eighth century as the son of the king of a land in the Bengal region of East India. When he was about to ascend to the throne, he had a dream of Manjushri, who said, “The throne is not for you.” Heeding Manjushri’s advice, he renounced the throne and retreated to the jungle. There he met and studied with various non-Buddhist gurus, meditated intensely and achieved advanced states of absorbed concentration. But, as was the case with Shakyamuni, he realized that withdrawing into deep states of concentration did not eliminate the roots of suffering. Relying on Manjushri, he eventually had actual visions of this embodiment of the wisdom of all the Buddhas and received teachings from him.

Shatideva then left the jungle and went to the monastic university Nalanda, where he was ordained as a monk by the abbot. There, he studied the great sutras and tantras and practiced them intensely, but he hid all his practices. Everyone thought he did nothing but eat, sleep, and go to the toilet. But, in fact, he was always in a clear light meditative state.

Finally, the monks of the monastery decided to expel him, as they thought he was useless. As a pretext, they told him he must give a discourse on an original text, thinking he would make a fool of himself. They set up a very high throne without any stairs, thinking he could not reach it. But the throne descended to the level of Shantideva, so that he could easily ascend it.

Then he began the teaching of Engaging in Bodhisattva Behavior, Bodhicharyavatara. When he reached a certain verse in the ninth chapter on voidness (emptiness), he slowly rose in the sky. The verse was:

(IX.34) When a (truly existent) functional phenomenon or a (truly existent) nonfunctional one (its voidness) do not remain before the dualistic mind, then since the other alternatives cannot be the case, there’s full pacification into (a state) without mental aim (at the impossible).

After that, only his voice was heard, reciting the rest of the text. He himself had disappeared from sight. The monks later wrote down the text from memory.

In his teaching, Shantideva referred to two other texts he had written at Nalanda: (1) The Compendium of Trainings, Shikshasamuccaya and (2) The Compendium of Sutras, Sutrasamuccaya, but no one knew where they were to be found. Someone finally had a vision of Shantideva telling him they were hidden in the beams of the ceiling of a certain monk’s room. Shantideva said in the vision he would not return himself.

There were several commentaries written to Engaging in Bodhisattva Behavior, especially to the ninth chapter. The Tibetan ones come from all traditions, as this text is central to all schools of Buddhism in Tibet. In the Gelug tradition, Tsongkhapa’s Grand Presentation of the Graded Stages of the Path (Lam-rim chen-mo) relies very much on The Compendium of Trainings and Engaging in Bodhisattva Behavior, especially for the teachings on the exchange of self and others. Although Tsongkhapa did not write a separate commentary to Engaging in Bodhisattva Behavior, his GrandPresentation of the Graded Stages of the Path covers many points treated in it. His Essence of Excellent Explanation of Interpretable and Definitive Meanings (Drang-nges legs-bshad-snying-po) covers many points from chapter nine. His Totally Clarifying the Intentions [of Chandrakirti’s “Supplement to (Nagarjuna’s ‘Root Stanzas on)] the Middle Way'”(dBu-ma dgongs-pa rab-gsal) also relies strongly on it.

Excerpt of a discourse on “Engaging in Bodhisattva Behavior,” by His Holiness the 14th Dalai Lama, Bodh Gaya, India, January 1978, translated and edited by Dr. Alexander Berzin https://studybuddhism.com/en/tibetan-buddhism/spiritual-teachers/shantideva

Shantideva was an Indian Buddhist scholar who studied at the Nalanda monastic University in the eighth century C.E.i Little detailed information exists concerning Shantideva’s life, though certain anecdotes lend some insight into the workings of what must have been one of the finest and most independent scholarly minds in Mahayana philosophy. My philosophy teacher in Dharamsala, Geshe Dorji Damdul-laii, related to me one story in particular which draws an interesting portrait of Shantideva the monk and scholar.

Before delivering an oral transmission of the Way of the Bodhisattva, known in Sanskrit as the Bodhisattvacharyavatara (or the Bodhicharyavatara in its abbreviated version), Shantideva was derided by the monastic community in general as a lazy and poorly studied man. Indeed, as far as the other monks at Nalanda could tell, Shantideva passed all his time either eating, sleeping, or using the bathroom. Eventually, this supposed reluctance to engage in the rigorous intellectual activity of the University began to sit ill with Nalanda administrators, and a plan was devised to expose Shantideva’s shortcomings in a rather public and embarrassing fashion.

Nalanda officials approached Shantideva and asked him to take his turn in the public space of the University in order to deliver a teaching on some aspect of the Buddha’s word. Fully expecting him to decline the offer, the officials were shocked when Shantideva readily accepted. They were not aware that Shantideva’s three perfections, (eating, sleeping, and using the bathroom), were in fact the physical meditative vehicles by which Shantideva practiced the teachings of the Buddha, and that he had achieved an astounding level of realization as a result of his studied and disciplined practice. In any case, the Nalanda officials went about organizing a very large and well attended gathering in order to showcase what they were certain would be Shantideva’s humiliation.

On the day of the teaching, the entire monastic community was assembled in front of the throne from which Shantideva was meant to deliver his address. According to legend, the throne was well over the height of Shantideva’s head, and no steps were provided in order to help him reach the top. Much to the chagrin of his detractors, Shantideva showed no discomfort. He simply stretched out his hand and lowered the throne to an appropriate level, ascended, and raised it back again. Needless to say, certain audience members were beginning to realize their mistake.

Shantideva proceeded to deliver one of the most profound and brilliant discourses concerning the bedrock concepts of the Mahayana path ever recorded in the Buddhist philosophical cannon. As he continued to teach, his throne ascended into the sky, and was greeted with the manifest presence of Manjushri, incarnate representation of the wisdom of all Buddhas. As Shantideva concluded his teaching, he disappeared from Nalanda, leaving his audience in stunned and silent reverence.

From this story, we can perhaps begin to understand importance of Shantideva’s role as a classical Buddhist saint, and the importance of the Bodhicharyavatara as a cornerstone of the Mahayana philosophical system. https://www.tsemrinpoche.com/download/Buddhism-Philosophy-and-Doctrine/en/Nick%20Barr%20-%20Shantideva’s%20Bodhisattvacharyavatara.pdf