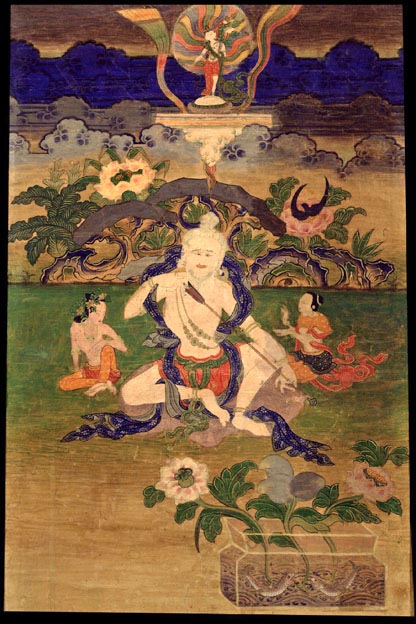 Saraha: The stable mind works to benefit others

Saraha: Song for a King

I prostrate to the one who has vanquished the power of the maras.

Just as when the wind blows
And still water is turned into moving waves,
So the appearing Saraha is just one,
Yet the king creates diverse aspects.

The ignorant press their eyes
And see one lamp as two.
Like this, in mind’s nature where seer and seen are not two,
Alas! The mind appears as two things.

Though many lamps are lit throughout the house,
Those with eyes to see remain in darkness.
Like this, though spontaneous wisdom is all-pervasive and nearby,
For the ignorant it is far, far away.

Though diverse, rivers are one in the ocean.
Though myriad, lies are overcome by a single truth.
Though darkness is manifold,
The rising of a single sun clears it away.

Though cloud banks take up water from the ocean
And fill the earth again with descending rains,
The ocean does not decrease; filling the whole sky, it remains full:
There is no increase or decrease.

The Victorious Ones are filled with perfect qualities,
Which all have the very same nature — spontaneous presence.
From the natural display of the great sphere, living beings take birth and therein cease.
In relation to this, there is not thing and no nonthing.

Giving up genuine bliss, you take another path
And place your hopes in conditioned bliss. Taking nectar in their mouth, bees come close,
But not drinking, they are far from enjoyment.

Having gone astray, the animals do not create suffering;
On the basis of this human life, experts create suffering.
On one hand, practitioners come to drink the nectar of space;
On the other, experts remain very attached to objects.

Bugs on excrement are attached to its smell
And think the pure fragrance of sandalwood foul.
Likewise, attached to dense ignorance, the source of samsara,
Individuals toss away the transcendence of suffering.

Just as the ocean’s salty water
Taken into the clouds turns sweet,
The stable mind works to benefit others,
The poison of objects turns into healing water.

When you realize the ineffable, it is neither suffering nor bliss.
When there is nothing to meditate upon, wisdom itself is bliss.
Likewise, though thunder make evoke fear,
The falling of rain makes harvests ripen.

First a thing and in the end a nonthing — neither is established; likewise, there is nothing other than these two.
There is no place to abide in the beginning, middle, or end.
For those whose minds are obscured by continual concepts,
Emptiness and compassion are expressed in words.

Just as the nectar dwelling within a flower
Is known by the bumblebee,
The fortunate toss away neither existence nor nirvana.
Like them, the ignorant should fully understand.

Just as an image appears on the mirror’s surface,
Where the ignorant look in their lack of knowledge,
So the mind that throws away the truth
Relies on many concepts that are not true.

Though the fragrance of a flower has no form,
It clearly pervades everywhere.
Likewise, through the formless nature
The circles of the mandalas will be known.

When a wintry wind strikes and stirs up water,
Though soft, it takes the form of stone.
When concepts attempt to disturb mind’s nature, where ignorance cannot take form,
Appearances become very dense and solid.

The true nature of any state of mind is free of flaws
And unaffected by the mire of existence and nirvana.
Even so, if a supreme gem is placed in a swamp,
Its radiance will not be clear.

In analyzing the mind with the reasoning of being neither one nor many,
If you discard the clear aspect of mind’s nature, you will descend to the lower realms;
While gazing at that suffering, you fall into its bottomless pit.
How could one have anything but compassion for this?

Once totally attached to kissing and the bliss of what follows,
The ignorant say that this is indeed the ultimate.
Having left his house, he stands in front of the gate,
Soliciting tales of sensual pleasure.

For the sake of the winds, you meditate on your body as an empty house,
Practicing artificial means in great variety and number.
From space it falls along with faults.
Overwhelmed, the yogi faints away.

Just as Brahmins make their burnt offerings
Of ghee and rice in a blazing fire,
Know that, from Ham, the quintessence of space, the substance of nectar produces experience;
The passing experience of bliss is grasped as reality.

Some make the firelight burn and bring it to their fontanel;
With their tongue they enjoy union with the smaller one.
This bonds them up and makes them thoroughly disturbed.
Swayed by pride, they call themselves yogis.

An experience of self-awareness, a mere name, they display with a proud intellect.
“Whatever binds, that itself liberates,” so they say.
Not knowing how to appraise a gem, the ignorant
Single out the color green to say that some trinket is an emerald.

This is bringing brass to mind as gold.
You think carrying this experience onto the path will accomplish the ultimate.
That is like being attached to the bliss of a dream.
You claim that aggregates are impermanent and bliss is permanent?

The letters E Vam make themselves understood.
By classifying four moments, the four seals are set out.
Some claim that through experiences, spontaneous presence appears.
Do not be like the one attached to the mirror’s reflection.

Not understanding, the deer runs
In confusion after the water’s mirage.
Likewise, the ignorant cannot evade thirst, and die.
Claiming it is ultimate, some take up bliss.

The relative truth refers to mindfulness; nonminding
Points to those mental states when the mind is released from mindfulness.
When completely transformed, this is the supreme of the supreme.
The result is the genuine supreme. Friends, you should know these.

The mind released from mindfulness engages in samadhi.
It is completely purified of the afflictions.
As the utpala born from a swamp is not stained by it,
So the mind itself is not affected by the faults arising from samsara nor by the qualities found in the Victorious One.

Mindfulness also sees with certainty that all things are like an illusion.
Transcending the world, take this moment into your mind and rest evenly in meditation.
Those whose minds recognize the teaching bind up ignorance.
Self-arising and inconceivable, wisdom naturally abodes within.

These appearances have the nature of clarity; from the very first they are unborn.
They do not arise as an entity with form; discard as well thinking they arise in the aspect of form’s characteristics.
Abide continually within the mind itself and practice only deep meditation.
Without thought, rest in this meditation free of mental activity and free of flaws.

A lamp is lit in the darkness of ignorance.
While you differentiate mental categories,
You discard the mind’s flaws.
Reflect upon the nature of nonattachment.

There is no negating, no constructing,
And no apprehending; it is inconceivable.
The ignorant are bound by mental categories.
The inseparable, the coemergent, is utterly pure.

Examining emptiness with the reasoning of one or many, you see that it is neither.
Through mere recognition, living beings are utterly freed.
Meditate recognizing what is clear and unmoving.
I apprehend the stable mind to be just that.

Through attaining the vast land of happiness,
And through seeing its own nature, mind becomes vast.
You walk through the land, yet mind’s nature is not separate.

Coemergent joy is the dharmakaya. The sambhogakaya is the seedling of joy
And superior; the leaves come forth.
At the time of the path, the dharmakaya does not radiate in the ten directions.
Bliss free of constructs is fruition itself.

Those staying in the land benefit those living there but are not truly existent.
Nevertheless, there is a need that they stay in that place, benefiting those beings.
Attached and ultimately not attached are the form kayas;
Emptiness is inseparable from appearance.

It is not like a pig attached to the mire of samsara.
Once you have realized the flawless mind, what fault is there?
Anyone who practices like this is not affected by anything.
Why would this person be bound by flaws?

Colophon: These verses were composed directly by glorious Saraha, great lord of practitioners. It was translated from the Indian original into Tibetan by the bilingual Nepali, Lama Asu. It was translated into English by Michele Martin and published in A Song for the King: Saraha on Mahamudra Meditation, with commentary by Khenchen Thrangu Rinpoche. Wisdom Publications, 2006) http://www.naturalawareness.net/mahamudra.html#SarahasSongforaKing