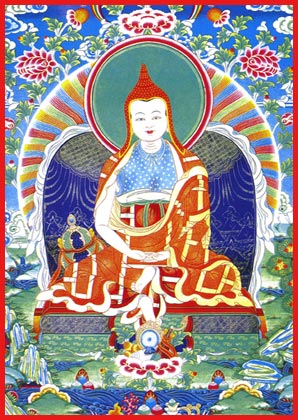 O Noble One, should you wish to experience the Continuum of Awareness (vidya-santana) in all its unveiled nakedness, then:

(1) focus on absolute Awareness as the object [of Meditation];

(2) press the points of the body with the mudra1;

(3) retain the coming and going of the breath2;

(5) rely on the immovability (acala) of body, eyes, consciousness;

(6) and grasp the Vast Openness [of absolute Awareness].3

This is the last testament of Sri Manjusrimitra.

2 To retain the coming and going of the breath here means to practice what in Yoga is called the kumbhaka, or vase-breath.

3 Manjusrimitra’s six steps are remarkably similar to a passage in the Mundaka Upanishad (ii, 3, 4): “Having taken as a bow the great weapon of the Secret Doctrine, one should fix in it the arrow sharpened by constant Meditation. Drawing it with the mind filled with That, penetrate, O noble one, the Imperishable as a target! The sacred Mantra is the bow; the arrow is oneself; the Absolute is said to be the target. With heedfulness is That to be penetrated. One should become one with That as the arrow with the target!”

One thought on “The Six Meditation”