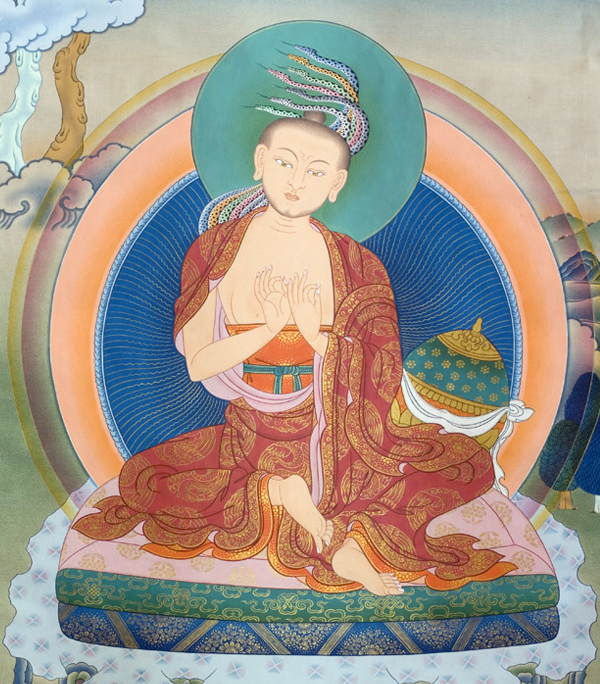 Great Praise of the Ten Acts of the Buddha

With skilful means and compassion, you were born in the Shakya clan,

Unconquerable by others, you vanquished Mara’s hordes,

Your physical form resplendent, like a mountain of gold.

To you, the King of the Shakyas, I pay homage!

You I shall praise, who first awakened the mind of enlightenment,

Then completed the accumulations of merit and wisdom,

And now in this age, through the vast sway of your actions,

Have become the lord and protector of living beings.

Homage to you that, having taught the gods,

Knew the time had come to tame the human world, and

Descending from the god realm in the form of an elephant,

Foresaw the family of your birth and entered the womb of Mayadevi.

Homage to you, prince of the Shakyas, born after ten months

In the auspicious Lumbini grove, where

Brahma and Indra revered you, your supreme marks

Proving you were destined to be enlightened.

Homage to you, lion among men, in all your youthful vigour,

Displaying your prowess in the games at Agha Magadha,

Where you triumphed over the proud contestants,

So that not one could stand as your rival.

Homage to you, who, to comply with worldly convention,

And avoid all misdeeds, took on a queen and courtiers

And by acting with such skilful means,

So you ruled the kingdom.

Homage to you, who saw that samsara is wholly futile,

Renounced the life of a householder,

And, travelling through the sky,

Ordained yourself before the Vishuddha Stupa.

Homage to you, who, intent on persevering till enlightened,

For six years practised austerities on the banks of the Nairanjana,

And taking diligence to its ultimate perfection,

Homage to you, who, seeking to make meaningful

All your efforts, made throughout beginningless time, sat

Unmoving in the vajra posture beneath the bodhi-tree in Magadha

And awakened into true buddhahood,

Homage to you, who, in your compassion,

Gazed at once upon living beings, then

Turned the wheel of Dharma in sacred places like Varanasi,

And established disciples in the three vehicles.

Homage to you that destroyed evil-minded opponents,

By defeating the six teachers of the tirthikas, Devadatta and the rest,

As well as the maras in Varanasi[1];

You were the mighty sage, victorious in battle.

Homage to you, who performed great miracles in Shravasti,

Unmatched in their splendour in all the three realms,

And through the offerings made by gods, humans and other beings,

Caused the teachings to prosper and increase.

Homage to you, who, to spur the lazy on to the Dharma,

Left your body, though immortal and like a vajra,

And passed into parinirvana

In the pure abode of Kushinagara.

Homage to you, who, to show that you had not in reality perished,

And so that beings of the future could gain merit,

Emanated a wealth of relics, and caused

Your remains to be divided into eight portions.

[1] Tib. ‘khor mo ‘jig. According to Sakya Pandita’s Gateway to Learning (mkhas ‘jug), this is an alternative name of Varanasi.