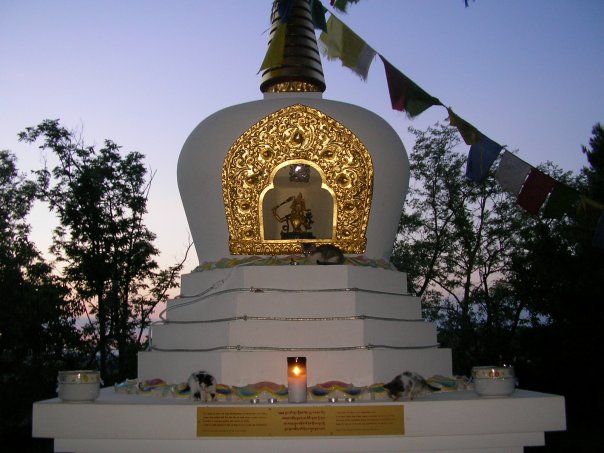 How can one live a good life, not only making yourself happier and more free, but also awaken some hope that someday perhaps you might do something for others? What is hindering us today? Can we say that we are thoroughly happy with just material well-being? These are questions that surface to a Westerner listening to Geshe Yeshe Tobtens teaching from Bodh Gaya, December 1996. I was there to visit the place of Buddha’s enlightenment, after some years as a newcomer to Buddhas teachings, and stayed at the Root Institute, just outside the central town. There one could also practice meditation. At the same time, a respected lama held teachings during five days. It is this teaching by Geshe Yeshe Tobten this site is dedicated to.
First, a brief biography of Geshe’s life (from foreword to the book ‘The way of awakening: a commentary on Shantideva’s Bodhicharyavatara’)
Geshe Yeshe Tobten was born in 1926 in a wealthy  family of farmers in the village Ngadra, a day’s walk from Lhasa, and became a monk when he was twelve years old. When the Chinese invaded his homeland in 1959, he was arrested, but fled and walked for two years over the Tibetan Plateau on foot, before arriving to the Indian border.

In India he completed his higher studies at ‘Geshe’ – the Tibetan name for professor, and taught for several years at the Varanasi University. When he was 44 years, he told the Dalai Lama about his desire to live his remaining days in meditation retreat, because he had since childhood deeply desired to attain renunciation, Bodhicitta and shunyata, three major Buddhist insights.
When freed from university duties, he built a hut in the mountains of McLeod Ganj where he lived for the rest of his life, except for some travels to teach abroad. He initiated a Buddhist center in Italy in the 1970s, the Istituto Lama Tzong Khapa. Geshe Yeshe Tobten was not only a formally trained teacher, but also had the experience coming from many years of meditation in the mountains. His explanations are therefore the special expression that only self-perceived experience can provide. He was educated at Sera, the most famous of the world’s Buddhist monasteries. He mastered the classical Buddhist themes of philosophy, logic, wisdom, metaphysics and morality, and the way he taught at clearly showed that he had first-hand experience of what he was talking about. Geshe Yeshe Tobten passed away in McLeod Ganj in 1999. When leaving, he sat in meditation position for twelve days, as signs of high levels of realization were seen.

As Geshe-la walked into the outdoor tent where the seminar would take place, one could feel that ‘this is a special person’. His body radiated purity and bore clear traces of an ascetic life. Focused on other things than us Westerners are accustomed to, some listeners probably had the impression that he seemed uninterested in those listening. But, when mapping the subject in detail and with precision, you got the feeling that he knew more about you than you did yourself. When teaching, he seamlessly weaved in good advice both for us western newcomers and to those who have left their meditation caves nearby (or perhaps other places) to come to listen. For me, the real meaning and profound wisdom was both hidden and out in the open. The only thing that was clear was that my life would take at new turn.
How can you honour someone in a proper manner, when you understand that he / she has realized an eternal truth? Is Praise the proper expression? From the small knowledge I have of Buddhist traditions, I have learned that, one always first honours the one that gave the teaching. This is logical, because the word is the link to the concept of understanding and thus, the truth. This ‘Dharma truth’ has a different quality from what we in everyday talk mean as opposed to false. It is said to be a deep understanding reached after a thorough analytical and deep contemplation. Geshes teaching tells us of ways this can be done by engaging oneself in Dharma practices, from everyday basic practices to advanced stages, the ultimate cutting through of all forms of spiritual materialism.
The text that Geshe-la based the seminar on, is a tribute or praise of Buddha Manjushri for the doctrine of Dependent Origination or Dependent Arising, (tib. “rten Brel bstod pa’) It is found in a text (Essence of True Eloquence, tib. Legs bShad aNying po) by Tsongkhapa.
The subject of ’emptiness’ has traditionally been guarded with strict rules. To misunderstand this teaching on the absolute shunyata is likened to holding a snake the wrong way, highly dangerous if ‘the medicine of relativism is taken for the poison of nihilism’. In Robert Thurman introduction to his ‘The Speech of Gold, reason and enlightenment in the Tibetan Buddhism’, he writes that this text over the centuries been regarded as very difficult to understand (‘Tsongkhapas iron bow’) and therefore only taught to advanced students. But after many centuries of development, it is Thurman’s opinion that it has become necessary to show the way to this inner understanding of the ultimate reality, the transcendent true nature of egolessness, to the general public. May this be so, and the publishing of this teaching be in accordance with the tradition.
This teaching was given 13-17 December 1996 in Bodhgaya, India by Geshe Yeshe Tobten, and translated to English by  Ven. Gareth Sparham, today an authority on Buddhist ethical trainings and Ph.D of University of British Columbia. Also a well known lecturer and translator of the works of Tsongkhapa (see Related Teachings). Signed transcribed the English text which in the summer of 1997 was edited by Tony Simmons at Root Institute.
If the birds of Bodh Gaya could write, they would probably phrase an introduction to this text in a more appropriate way (they have quite loud voices), but it its my hope that this will not hinder anyone to  benefit from the experienced advice of one of today’s most highly respected Dharma teachers.