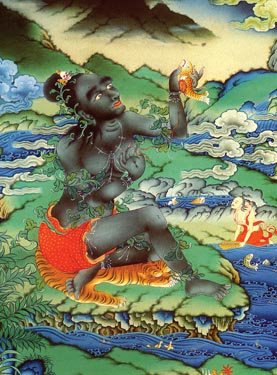 Song of the Mahamudra composed by Tilopa to Naropa.
Mahamudra, the royal way, is free
from every word and sacred symbol.
For you alone, beloved Naropa,
this wonderful song springs forth from Tilopa
as spontaneous friendship that never ends.
The completely open nature
of all dimensions and events
is a rainbow always occurring
yet never grasped.
The way of Mahamudra
creates no closure.
No strenuous mental effort
can encounter this wide open way.
The effortless freedom of awareness
moves naturally along it.
As space is always freshly appearing
and never filled,
so the mind is without limits
and ever aware.
Gazing with sheer awareness
into sheer awareness,
habitual, abstract structures melt
into the fruitful springtime of Buddhahood.
White clouds that drift through blue sky,
changing shape constantly,
have no root, no foundation, no dwelling;
nor do changing patterns of thought
that float through the sky of mind.
When the formless expanse of awareness
comes clearly into view,
obsession with thought forms
ceases easily and naturally.
As within the openness of universal space
shapes and colors are spontaneously forming,
although space has no color or form,
so within the expanse of awareness
realms, relations and values are arising,
although awareness possesses
no positive or negative characteristics.
As the darkness of night,
even were it to last a thousand years,
could not conceal the rising sun,
so countless ages of conflict and suffering
cannot conceal the innate radiance of Mind.
Although philosophers explain
the transparent openness of appearances
as empty of permanent characteristics
and completely indeterminable,
this universal indeterminacy
can itself never be determined.
Although sages report
the nature of awareness to be luminosity,
this limitless radiance cannot be contained
within any language or sacramental system.
Although the very essence of Mind
is to be void of either subjects or objects,
it tenderly embraces all life within its womb.
To realize this inexpressible truth,
do not manipulate mind or body
but simply open into transparency
with relaxed, natural grace
intellect at ease in silence,
limbs at rest in stillness
like hollow bamboos.
Neither breathing in nor breathing out
with the breath of habitual thinking,
allow the mind to be at peace
in brilliant wakefulness.
This is the royal wealth of Mahamudra,
no common coin of any realm.
Beloved Naropa, this treasure of Buddhahood
belongs to you and to all beings.
Obsessive use of meditative disciplines
or perennial study of scripture and philosophy
will never bring forth this wonderful realization,
this truth which is natural to awareness,
because the mind that desperately desires
to reach another realm or level of experience
inadvertently ignores the basic light
that constitutes all experience.
The one who fabricates
any division in consciousness
betrays the friendship of Mahamudra.
Cease all activity that separates,
abandon even the desire to be free from desires
and allow the thinking process to rise and fall
smoothly as waves on a shoreless ocean.
The one who never dwells in abstraction
and whose only principle
is never to divide or separate
upholds the trust of Mahamudra.
The one who abandons craving
for authority and definition,
and never becomes one-sided
in argument or understanding,
alone perceives the authentic meaning
hidden in the ancient scriptures.
In the blissful embrace of Mahamudra,
negative viewpoints and their instincts
are burned without remainder, like camphor.
Through the open door of Mahamudra,
the deluded state of self-imprisonment
is easily left behind forever.
Mahamudra is the torch of supreme liberty
shining forth through all conscious beings.
Those beings constituted by awareness
who try to ignore, reject or grasp awareness
inflict sorrow and confusion upon themselves
like those who are insane.
To be awakened from this madness,
cultivate the gracious friendship
of a sublime sage of Mahamudra,
who may appear to the world as mad.
When the limited mind
enters blessed companionship
with limitless Mind,
indescribable freedom dawns.
Selfish or limited motivations
create the illusory sense of imprisonment
and scatter seeds of further delusion.
Even genuine religious teaching
can generate narrowness of vision.
Trust only the approach
that is utterly vast and profound.
The noble way of Mahamudra
never engages in the drama of
imprisonment and release.
The sage of Mahamudra
has absolutely no distractions,
because no war against distractions has ever been declared.
This nobility and gentleness alone,
this nonviolence of thought and action ,
is the traceless path of all Buddhas.
To walk this all-embracing way
is the bliss of Buddhahood.
Phenomena on every plane of being
are constantly arising and disappearing.
Thus they are forever fresh,
always new and inexhaustible.
Like dreams without solid substance,
they can never become rigid or binding.
The universe exists in a deep, elusive way
that can never be grasped or frozen.
Why feel obsessive desire or hatred for it,
thereby creating illusory bonds?
Renounce arbitrary, habitual views.
Go forth courageously to meditate
in the real mountain wilderness,
the wide open Mahamudra.
Transcend boundaries of kinship
by embracing all living beings
as one family of consciousness.
Remain without any compulsion
in the landscape of natural freedom:
spontaneous, generous, joyful.
When you receive the crown of Mahamudra,
all sense of rank or attainment
will quietly disappear.
Cut the root of the vine that chokes the tree,
and its clinging tendrils wither away entirely.
Sever the conventionally grasping mind,
and all bondage and desperation dissolve.

The illumination from an oil lamp
lights the room instantly,
even if it has been dark for aeons.
Mind is boundless radiance.
How can the slightest darkness
remain in the room of daily perception?
But one who clings to mental processes
cannot awaken to the radiance of Mind.
Strenuously seeking truth
by investigation and concentration,
one will never appreciate
the unthinkable simplicity and bliss
that abide at the core.
To uncover this fertile ground,
cut through the roots of complexity
with the sharp gaze of naked awareness,
remaining entirely at peace,
transparent and content.
You need not expend great effort
nor store up extensive spirtual power.
Remain in the flow of sheer awareness.
Mahamudra neither accepts nor rejects
any current of energy, internal or external.
Since the ground consciousness
is never born into any realm of being,
nothing can add to or subtract from it.
Nothing can obstruct or stain it.
When awareness rests here,
the appearance of division and conflict
disappears into original reality.
The twin emotions of anxiety and arrogance
vanish into the void from which they came.
Supreme knowing knows
no separate subject or object.
Supreme action acts resourcefully
without any array of instruments.
Supreme attainment attains the goal
without past, future or present.
The dedicated practitioner
experiences the spiritual way
as a turbulent mountain stream,
tumbling dangerously among boulders.
When maturity is reached,
the river flows smoothly and patiently
with the powerful sweep of the Ganges.
Emptying into the ocean of Mahamudra,
the water becomes ever-expanding light
that pours into great Clear Light
without direction, destination,
division, distinction or description.

One thought on “Tilopa: Song of the Mahamudra”