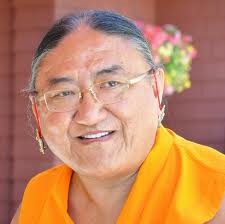 His Holiness Sakya Trizin: “The meaning of emptiness is not that phenomena do not exist. What is truly meant by emptiness is that everything that appears to our senses, absolutely everything, is interdependent ”.

Emptiness as Expressed in the Heart Sutra. A Teaching by His Holiness the Sakya Trizin.

The teachings of the Buddha are the source of all happiness and benefit, in this life as well as in future ones. Life makes many demands on us – we need food, shelter and other basic necessities for our survival. But the most meaningful thing in our lives is to discover the truth of all phenomena. One of the most important teachings that the Buddha gave us is that everything is impermanent, particularly our human life, which faces so many obstacles, and which can be cut short at any time. Whatever gains we attain in this life, whether it be wealth, fame, or prosperity, these gains will only last us during this lifetime, which is a very limited amount of time. This is why Jnanakirti, the great master, said that we must strive to realize truth while we have this great opportunity, as to have such an opportunity is very difficult, and it may not happen again for a very, very long time. And so, the most important, the most meaningful thing that we can do during this lifetime, which provides all the right conditions and is free from all the unfavourable states, is to discover the truth about the nature of reality.But, how to find this truth? Normally, what we see, what we hear, what we think, all of our experience, we consider to be reality. But in fact, it is not necessarily reality – reality could be something else altogether. Our notion of reality is in complete contradiction with what is true reality. For example, in our daily life, we meet many people, and we form an opinion of each one of them. One person we find to be a very good person, and we really like him or her. And then, days, months, or years later, this person changes, and suddenly we don’t see them as a good person at all, but rather as a very bad one. So where is the truth? All good and all bad cannot coexist – this person cannot be both all good and all bad at the same time. So, most of the time, our perception is wrong. What we think today might be wrong tomorrow. And what we’ll think tomorrow might be in contradiction with what we’ll be thinking the day after. This shows that we do not see reality as it really is, we do not see the real meaning, or the true nature, of phenomena.

Since we do not have the potential or the power to see and perceive reality as it is, we need to rely on an authentic master, the Lord Buddha, and on His teachings, in order to discover the truth about reality. The Lord Buddha, in his infinite wisdom, compassion and power, bestowed an incalculable amount of teachings in order to suit every level of mentality, every level of propensity, every level of intelligence. If we wish to divide the Buddha’s teachings into categories, we can do so in many different ways. One way is to place them in chronological order, according to which there are three main teachings, or Wheels of Dharma: the First, Second, and Third Wheels of Dharma.

And then, there is the Second Wheel of Dharma, which consists mainly of definitive teachings. Here, the Buddha gave the teaching of the Perfection of Wisdom, or the Prajnaparamita, which is contained in a great number of volumes. The essence of this Perfection of Wisdom is what is known among Buddhists as the Heart Sutra.

And then, there is the Third Wheel of Dharma, which consists of a mixture of definitive and interpretive teachings.

The most important of the Three Wheels of Dharma is the second one, the Prajnaparamita, which explains emptiness, or the absolute truth of the real nature of phenomena. Although the Lord Buddha Himself gave this teaching to His many followers, He gave the prophecy that after His Mahaparinirvana, there would be a bikshu named Naga and that only he would be able to explain the true meaning of these Perfection of Wisdom sutras.

Ordinary persons, of course, aren’t real ly interested in discovering the true nature of all phenomena. But religions and different philosophical schools do try to elucidate the real meaning of life, the truth behind everything that we see, hear, and do, the truth behind our entire experience. What is the true meaning, what is the real nature of all these phenomena? Each different school or religion that investigates the nature of reality comes to a different conclusion. Even within the Buddhist tradition, there are different schools, each with their own conclusion. Some schools or religions assert that everything is created by God, others say that it is made of elements, while others affirm that it is made of atoms but that atoms are impossible to isolate. There are many, many different explanations of ultimate reality.

The unique thing about master Nagarjuna is that he didn’t say ‘reality is this, or it is that’. He explained the Middle Way, known as Madhyamika. After examining phenomena, and applying acute reasoning to his observation, he deduced that nothing could be affirmed. He saw that there is no such thing as “it is this way”, or “it is that way”, as reality is beyond description. Since it is impossible to express this truth, or even more so to find a suitable name for it, it is often referred to as ‘emptiness’. But this does not mean that everything is empty. For example, when we say that a cup is empty: empty of what? Empty of water, or of anything else. But this does not mean that the cup doesn’t exist, or that water doesn’t exist. It is not a nihilistic statement.