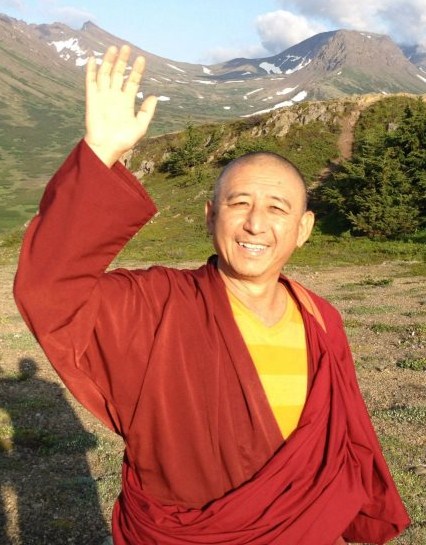 Ven. Geshe Thubten Soepa: Whoever gives up harming others, having understood this in accordance with the situation set forth, is a virtuous practitioner.

First, I would like to tell you a little about myself. My name is Geshe Thubten Soepa. I completed my Geshe Larampa exam, and then taught philosophy in Asian monasteries. Afterward, I went to Germany and around Europe for nine years at FPMT centers. I am still a traveling FPMT dharma teacher.

I would like to say that Lama Zopa Rinpoche has taken responsibility to protect animals with his animal sanctuary project. His work is a fantastic example of a Tibetan Buddhist lineage lama. I rejoice and may these merits result in him having a long life and good health. You, as the director of Lama Zopa´s animal sanctuary and all those who are involved, working for the wishes of Lama Zopa Rinpoche, as you know, you too are collecting good karma. I rejoice!

I say this with scriptural proof: Shakyamuni Buddha says in the Karmavibanga sutra,

Being kind to animals, saving them, and protecting them is not a matter of religion. It is something everyone should do.

Except for a few cultures and religions, and some people who naturally don’t eat meat, most of the world

has the bad habit of eating meat without analyzing. If we analyze the details, humans don´t need to eat meat. Their natural body system is not like tigers, snakes or lions. Humans don´t have fangs. According to Buddhist cosmology, in the Abhidharmakosha it says that at the beginning of this earth, countless years ago, our lineage grandfather, Vramah and the gods and goddesses were miraculously reborn. They had light and were able to fly. They didn´t eat dirty food, meat, egg or blood. They used concentration food and nectar. (Further information can be found in the Abidharmakosha and its commentary.)

Many years later, some gods and goddesses ate earth and dirty foods. Their light disappeared and they could not fly. They could not see their companion gods and goddesses. Then they started to have sexual relations. Generations later they ate meat and blood. They started to become violent and kill each other. That was the beginning of being human. Human translates into Tibetan terminology as “mi” or “minang”. “Mi” means, “I cannot see my companion gods and goddesses.” Therefore, countless years ago, our lineage grandfather and grandmother gods, did not eat meat. Generations later eating meat became a bad habit. This explanation comes from Abhidharmakosha cosmology.

Abidharamakosha comes from the 7 Arhat`s Abidharma great Buddhist texts. It doesn´t come from Buddha Shakyamuni sutras. Buddhist philosophies agree that our lineage originated from grandfather Brama and many gods and goddesses. Buddhist philosophy never believed in a creator god. Also, Jain, Sankhya and Carvaka philosophies don´t believe in a creator god. But some religions believe that grandfather Brama is creator god, such as different Hindu religions philosophies. Buddhist religion-philosophy believes in natural law by reason of interdependency. According to Jainism there is no creator god, but by reason believe in karma or causes and effects. Sankya believes in ´main´ or principle energy. For the Carvaka ´seeing is believing´. So if they don´t see something, they don´t believe in it. (Detailed information can be found in the tenants of the various religions).

Nowadays, we have bad habits everywhere. Millions and millions of people buy and eat meat. This creates the killing, suffering and torture of millions of animals everyday! Indirectly this creates animal hell. Therefore all virtuous buyers, sellers and consumers create the same negative karma or sin. This explanation comes from Shakyamuni Buddhá’s Lankavatara sutra and Kalichakra tantra. In chapter six of the Lankavatara sutra, the Buddha says:

All tremble at violence; all fear death.

All tremble at violence; life is dear to all.

Likewise, it says in one tantra in the Kanjur:

Those who give up harming beings

No weapons exist that don´t cause fear;

Everyone shuns them to stay alive.

Take your body as example

Don’t cause any harm to others!

Also, you wrote about millions of turkeys, chickens and animals being killed every day for food and profit. This problem comes from nowadays our situation money has big power. Money looks like creator god. Of course, people are over-focused on making money. Even money controls leaders of countries. They think that if they have a lot of money and can do anything. When people believe in this idea, then they care less about an ethical life and good morality. They over-focus on money which results in killing, stealing, cheating, lying, destroying the natural environment, the killing of animals and the selling of meat. This reality is a foolish idea because it results in our poor health and brings many sicknesses. It destroys our welfare. This is my opinion. Please immediately don´t believe this. We will continually need to analyze, and come to a real understanding ourselves.

The Buddha as well as the Lankavatara sutra says:

Hey, Mahamati, moreover, in this regard those who kill, kill and trade because they want profit. Whatever fools eat meat, buy the meat for money. Those who perform the killing want profit, so they kill animals that fly in the sky, live in the water, or walk on the earth, in many different ways–with iron hooks, slings, and nets–thus seeking profit. Mahamati, as there is no so called meat that has not been ordered, that is without seeking and without perception, you should not eat meat.

And so, we need to develop great compassion with correct wisdom. This is everyone´s important responsibility. I will continue to read Buddhist sutras and analyze logically. Perhaps one day I will write another book about it.