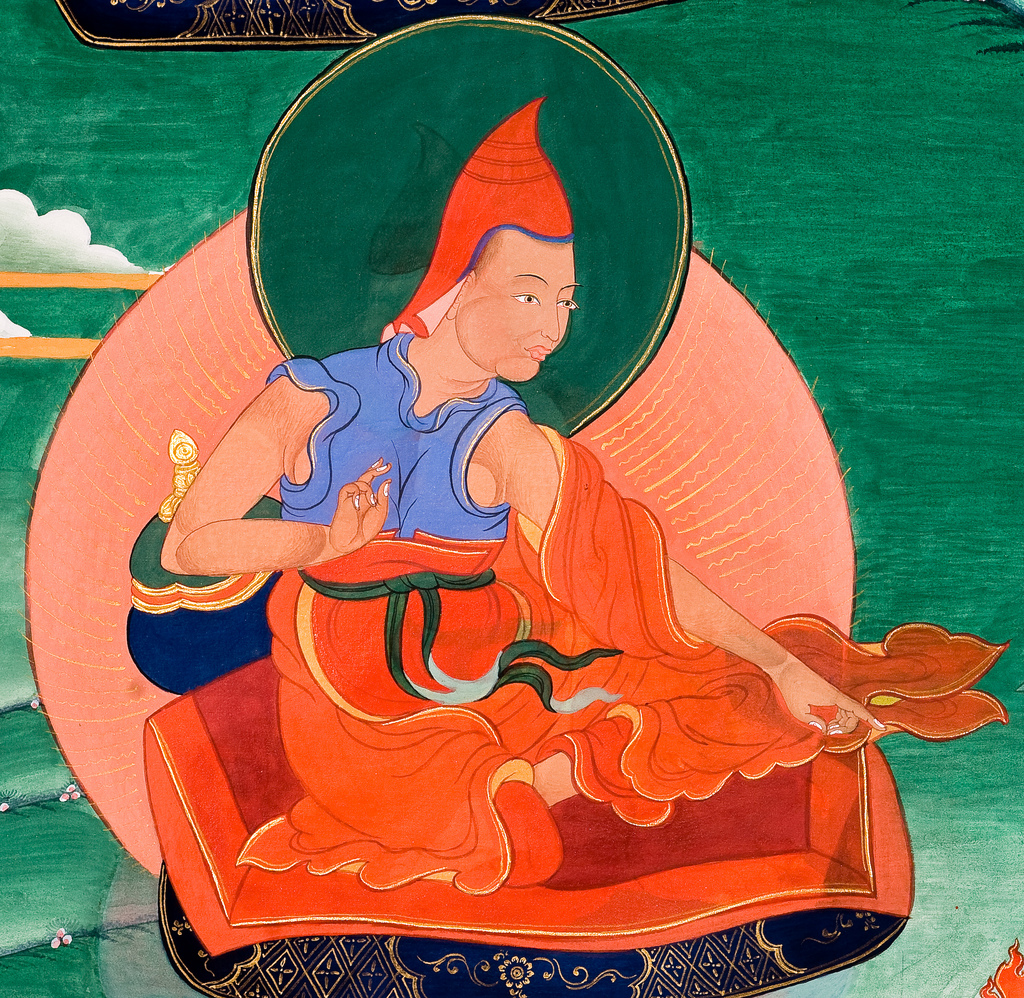 (2) (Buddha) spoke of compulsive samsaric existence (as true suffering) and the method of (entering) compulsive existence(as the true origin of suffering), also the method of pacifying (both as the true pathway mind), and likewise their pacification (as a true stopping). But worldly ones, who (are improper vessels and therefore) cannot comprehend this at all, will attribute (the fault of their inability to understand) as if it were that of the Able Sage (Buddha).

(3) (You Samkhyas and Vaisheshikas) are really amazing – you wish to pass beyond sorrow (to nirvana) by giving up all (and yet you still cling to your belief in truly established existence). What reason is there (for you) not to be happy at these (teachings of voidness, since it’s the understanding of them that) will extricate all (your disturbing emotions and suffering)?

(4) How can those who do not know the methods for giving up (suffering actually) come to give it up? Therefore, it is said that except (through the teachings on voidness given) by the Able Sage (Buddha), there definitely can be no state of peace.

(5) Anyone who comes to develop indecisive wavering about the obscure phenomena spoken of by Buddha (can resolve his doubts by relying on the fact that his) teachings on voidness (are verifiably true. In this way,) he can develop confidence solely in this very (Sage also concerning phenomena extremely obscure).

(6) Any (non-Buddhist teachers asserting a static creator) who have difficulty seeing (correctly the actual facts about the gross) world are (surely) charlatans with respect to other (more subtle matters, such as the nature of reality). Whoever would follow them will be deceived for a very long while.

(7) It is extremely difficult for those who would go themselves to a state beyond sorrow to do that. (Although Buddha taught voidness) for the purpose of leading (others to this state), those unfit (as vessels for it become frightened of voidness and) are unhappy to take it to mind.

(8) Those who do not see (the advantages of meditation on voidness or the disadvantages of not so doing) do not (even) begin to fear (voidness), while those who do see (voidness) will in all ways turn away from (fearing it). Therefore, it is said that fear (of voidness) arises for sure (only) in those who know (only) a little (about it).

(10) Anyone, obscured simply by naivety, who would prevent (teachings being given on) voidness will not even go to (a better rebirth of) positive qualities and goodness, so what need to mention liberation?

(11) Although degeneration from ethical discipline is a simple (matter), it’s not at all (the same with degeneration) from the (correct) view (of voidness. This is because) with ethical discipline you can progress (only as far as) to a higher status rebirth, but with a (correct) view, you can achieve the supreme states (of liberation or enlightenment).

(12) (So,) to those who are unfit (vessels for the voidness teachings), it’s best (to teach in accord with their) grasping forimpossible “souls” and not to teach (them) the lack of impossible “souls.” For (such a) one, (these teachings would cause him to) go to a worse rebirth state (by his misunderstanding); whereas for those who are out of the ordinary, (they will lead) to a state of peace.

(13) There’s no second gateway to (any state of) peace (other than through the realization of voidness), as it causes all wrong views to fall apart. Thus, what becomes the object of cognition for all Buddhist (aryas) is said to be the lack of an impossible “ soul.”

(14) Those that are unfit (vessels) generate fear even from thename of this teaching, (namely “voidness”). Whereas it can be seen that powerful ones who (understand voidness) do not generate fear at inferior (views).

(15) This teaching (of voidness) was not spoken by the Thusly Gone (Buddhas) for the sake of debate; but be this as it may, it burns off (the wrong views of) the proponents of (all) other (teachings), like fuel by fire.

(16) Anyone who comes to know this teaching (of voidness) will not be happy with other (views claiming truly established existence). Therefore, this teaching seems to me like a thresholdat which (all wrong views) fall apart.

(17) In reality, there are no (truly existent) “souls.” So what (arya), abiding in what (Buddha) intended, thinking like that, would become excited about the (conventionally) existent (self)? And what (arya) would become frightened by the (totally) nonexistent (“self”)?

(18) After seeing so many (Tirthika) holders of incorrect salvific views, which will become the seed for their meaningless (suffering in samsaric existence), who wouldn’t developcompassion for (these) beings who wish the teachings (for liberation)?

(19) The ultimate Dharma of the Shakya(muni followers), the naked (Jains), and the Brahmins – these three are upheld (respectively) by the mind, the eyes, and the ears. Because of that, the tradition of the classical texts of the Able Sage (Buddha) is the subtlest.

(23) The Thusly Gone (Buddhas) have said that the (practice of) Dharma is, in short, doing no harm (in order to attain a higher status rebirth) and (realizing) voidness, the (natural) state beyond sorrow (in order to attain liberation or enlightenment). In this (Buddha-Dharma), there are only these two.

(24) But for all worldly ones, their own positions become as attractive as their own places of birth. For what (reason) should the causes for reversing this (attachment, namely not harming and realizing voidness), be attractive (to them)?

(25) But those with sense will most graciously accept topics of knowledge (useful for liberation) even from other (traditions). Isn’t the sun universally the same for everyone on this earth (in bringing light) to those who have eyes?