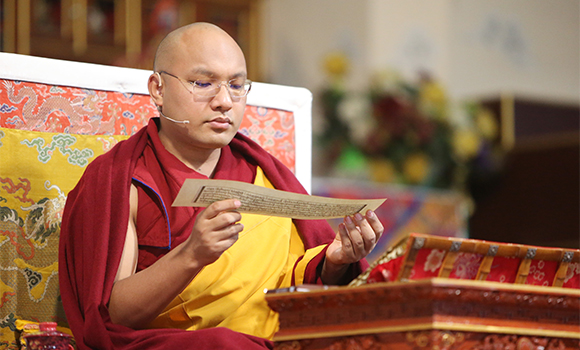 The Gyalwang Karmapa: Rousing bodhichitta comes from training the mind.

January 22, 2016-Tergar Monastery, Bodh Gaya, Bihar, India
During the eighth day of teaching at the Arya Kshema Winter Dharma Gathering, the Gyalwang Karmapa discussed questions related to giving bhikshuni ordination to nuns. He also continued his teaching on rousing bodhichitta through taking the bodhisattva vow, based on chapter nine of the Ornament of Precious Liberation by Gampopa.

The Karmapa began by congratulating the nuns in attendance for the confidence and enthusiasm they have developed since the first Arya Kshema Gathering. “As I look out, I see that you’ve all gained confidence and self-esteem, knowing that you are capable of doing things and taking action,” the Karmapa said. “I see this in your expressions and I am very happy…. No matter what we are doing, if we first of all do not have confidence in ourselves, it is difficult to get anything done no matter what it might be, whether in the Dharma or in worldly activities.” The Karmapa added, “I think it is important to recognize how difficult it is to find such confidence and to know how much value it has.”

The Karmapa also spoke about the many impediments nuns face when they seek to increase their confidence and enthusiasm. In particular, he said, there are those who say that the teachings of Shakyamuni Buddha would be decreased by 500 years if women are ordained. The Karmapa stated that it is difficult to find a clear textual basis for this assertion.

Based on the Karmapa’s own research, he said that over the past year he has found strong textual evidence that calls into question the notion that the teachings of Shakyamuni Buddha would be decreased if nuns were given full ordination. Specifically, the Karmapa found a reference to this issue in a text called The Treatise of the Great Exposition, which comes from the Exposition School, a branch of the Sarvastivada School—one of the 18 original schools of Buddhism. This text was not translated into Tibetan until the mid-20th century, but there were historically three different translations into Chinese.

In this text, the authors raise a number of doubts and try to clarify points that are not clear in the sutras. One of the questions asked is: “The Buddha prophesized that the teachings would only remain 1,000 years, and that they would be diminished by 500 years if women were ordained. Since women were indeed ordained, that would mean the teachings should only remain 500 years. However, the teachings still remain. [This text was written 600 years after Shakyamuni Buddha passed away.] Why is that?”

The second response in the text is that when women were originally ordained by the Buddha, they needed to accept eight “heavy rules” in order to keep the teachings from being decreased by 500 years. The Treatise of the Great Exposition says that because the nuns accepted these eight rules, the duration of Shakyamuni Buddha’s teachings has not decreased. The Karmapa said this authentic and authoritative scriptural reference should help to eliminate any doubts about giving full ordination to nuns.

The Karmapa continued discussing his own views regarding why the Buddha did not initially allow women to ordain and why the eight rules were instituted. Specifically, the Karmapa said that during the time of the Buddha, women had a much lower standing in society than men—far lower than today. The fact that the Buddha gave women the ability to take full ordination was something “unprecedented and astonishing in his society,” the Karmapa said.

“So when we see that the Buddha did not immediately allow women to become ordained, I think the reason is because of the societal situation of that time and place,” the Karmapa explained. “But in any case, the Buddha, seeing the reasons and the benefits, allowed women to go forth and ordain. The eight rules are based on the societal conditions of that era. This becomes very clear when we look at the vinaya.”

The Karmapa continued, “The fact that in the 21st century we’re not able to do everything the Buddha taught 2,500 years ago, such as to give the bhikshuni vows, is really an astonishing situation. But it comes down to the point that from this day on, we should not worry about things that are unnecessary and unimportant. Instead we should increase our enthusiasm and our inspiration to bring benefit to the teachings and sentient beings by upholding, spreading, and propagating the teachings. If we do this I think it will work out well.”

After the tea break, the Karmapa returned to teaching on the Ornament of Precious Liberation by Gampopa, in particular on the ritual of taking the bodhisattva vow. The first point the Karmapa explained was why rousing bodhichitta through meditation and through ritual are both important. The Karmapa said that according to the great master Atisha, it is important to first train our minds in relative bodhichitta through the meditation of mind training, or lojong, in order to make the ritual of taking the bodhisattva vow meaningful.

Next, the Karmapa explained the qualities of someone from whom we can take the Bodhisattva Vow. Such a person must be skilled, venerable and capable. Being skilled means being able give advice on how to develop bodhichitta, being able to perform the ritual, and knowing how to uphold the precepts. Being venerable means having taken the Bodhisattva Vow and upholding the precepts. Finally, being capable means being able to make the student understand what they are doing. Specifically, the Karmapa said it is important that the vows be explained in a language the student speaks. “The student needs to be able to understand what they are doing while taking the vow,” the Karmapa said.

In terms of the mental support one needs for developing bodhichitta newly, the Karmapa quoted the Kadampa masters, who say it is essential that you have gone for refuge to the Three Jewels—the Buddha, Dharma and Sangha. The Karmapa said it is also necessary to have longing and enthusiasm to take the vow, and also the body, speech and mind capable of accomplishing it.

The Karmapa also discussed whether it is necessary to have taken the vows of individual liberation in order to take the vows of aspirational bodhichitta. He explained how the great masters have differing views, and yet Gampopa’s position on this has been unclear. The Karmapa said that the monks have been researching Gampopa’s view and it will be discussed during their Winter Gathering.

The Karmapa continued his explanation, mentioning that the Kadampa masters, who were of the opinion that the vows of individual liberation were necessary. He explained that at the time of the Kadampa masters in Tibet, there were false views about the Dharma and questionable conduct, which were likely some of the reasons the Tibetan masters invited Atisha to Tibet—to correct the teachings. The Karmapa stated that because of the false views propagating at the time, the Kadampa masters had to be strict in their practice to counteract misunderstanding and poor ethics.

The Karmapa said that while many Kadampa masters did engage in serious tantric practice, they did so in private. Their main concern seems to have been presenting a strict framework for Dharma practice to counteract the decline they saw. It was a skillful means for that period in the history of Tibet.

The Karmapa also observed that there are signs that not all Kadampa practitioners were particularly fond of yogis (ngakpas). To illustrate this, the Karmapa told a story about Rechungpa—one of Milarepa’s two main disciples— getting kicked out of a Kadampa monastery because of his white robes. He also spoke about of Milarepa’s other main disciple, Gampopa, being told by his Kadampa friends that his dreams of a white clad yogi (Milarepa) were a bad omen.

With these stories illustrating the situation in Tibet many centuries ago, the Karmapa closed his teaching. The Arya Kshema will continue with a long White Tara puja on January 24.

One thought on “8 – The Gyalwang Karmapa Teaches on Bodhisattva Vow”