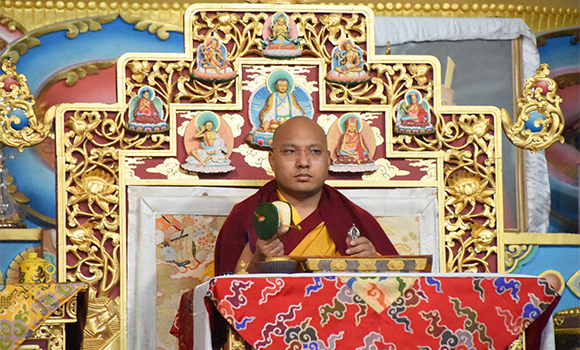 The Gyalwang Karmapa: The particular benefit of this sadhana is that it brings a long and stable life to those who hold the teachings and for others it vanquishes fear, and continued engaging in virtuous actions keeps fear away.

January 24th 2016-Tergar Monastery, Bodhgaya, Bihar
Today His Holiness the Gyalwang Karmapa presided over a White Tara puja in the main shrine hall of Tergar Monastery. The hall was decorated with garlands of marigolds, strings of their yellow and orange flowers hung from the door of the main entrance and on each of the sixteen pillars of the traditional Tibetan style monastery. Bouquets of white lilies and red roses lined the front of the stage. The Karmapa took his seat on the high, golden throne, this time on the main stage, where space was also made for a three dimensional mandala. On its top tier was a gold statue of White Tara, the Goddess of Long Life. A miniature parasol, one of the eight auspicious symbols, floated above the statue. To the left of Tara was a torma sculpture created to represent her, and to the right of the gold statue, was another torma dedicated to the 21 Taras. Gold and silver mandalas were set in the four directions and in between them were offering bowls filled with saffron water and rice, representing the eight auspicious, peaceful offerings of two the kinds of water, flowers, incense, light, food, perfume and beautiful sounds. All of the beautiful Dharma objects on the shrine came from the Karmapa’s personal collection.

The second tier of the mandala held offering bowls filled with rice, incense sticks, and flowers, a precious offering known in Tibetan as metok tsampaka. The final base tier of the mandala held long rows of tormas. With the stage so beautifully set and incense filling the hall, His Holiness led the nuns in making offerings, praises, and requests to the deity through the recitation of the sadhana (liturgical) text entitled, A Ritual Practice of White Tara Called “Bestowing All Siddhis.” The nuns chanted verse after verse of praise in unison with periodic clashing of cymbals, the pounding of drums and ringing of bells.

The particular benefit of this sadhana is that it brings a long and stable life to those who hold the teachings and for others it vanquishes fear, and continued engaging in virtuous actions keeps fear away. The text was composed by the 5th Shamar, Konchok Yenlak, and written based on sadhanas composed by previous lamas. The sadhana was later expanded upon by the 14th Karmapa, Thekchok Dorje, according to the wishes of the 9th Karmapa, Wangchuk Dorje.

The sadhana practice continued into the afternoon, and in the final session the nuns, who filled the shrine hall to its edges, chanted long life prayers for great lamas and for the Gyalwang Karmapa, thereby dedicating to others the meritorious results of their practice of White Tara, Goddess of Long Life.