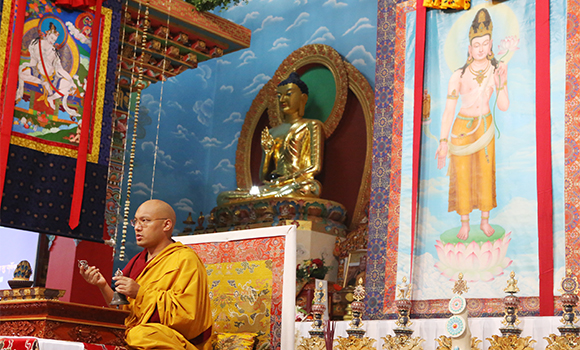 February 3rd 2016 – Tergar Monastery, Bodh Gaya, Bihar, India.
The Third Arya Kshema Winter Dharma Gathering was brought to a close. The nuns began by chanting the opening prayers in Sanskrit, the sacred language of ancient India. Behind His Holiness the Karmapa was a thangka of a standing Avalokiteshvara, holding a lotus flower in his left hand and raising his right hand, from which emanated an image of Ananda, a disciple and cousin of the Buddha. The nuns sang praises to the Buddha, Avalokiteshvara, Ananda, and Mahaprajapati Gautami, the step-mother of the Buddha, who raised and cared for the Buddha after his mother passed away seven days after he was born. It was Mahaprajapati Gautami who first beseeched the Buddha to allow women to enter the sangha. After the Buddha initially declined—as the Karmapa explained earlier during the Arya Kshema Gathering, allowing women to enter the monastic order during that particular period of Indian history was considered a radical move—Mahaprajapati Gautami then approached Ananda to convince the Buddha to allow her and other women to go forth and enter the Sangha.
This morning, the nuns engaged in a Ritual Practice for the Dharma to Flourish in Women’s and Especially Nuns’ Communities, composed by His Holiness. Here one finds that women should supplicate Ananda, bring him to mind and praise him, and Ananda will protect and remove obstacles for women who sincerely wish to practice the Dharma. The sadhana states, “Whether they are male or female, they will accomplish all mundane and supramundane needs in this and all future lives.”

Reciting the text, repeating again and again the words selected by the Karmapa to demonstrate clearly women’s ability to attain enlightenment, created great faith and inspiration among the nuns and the members of the audience. Many were moved to the point of tears. With gratitude in their hearts, nuns and laywomen looked to the Karmapa who had the unwavering conviction that they could attain ultimate fruits of liberation through the study, practice, and discipline in the Dharma. The supplication began as follows:

I always prostrate at the feet of the Bhagavan Arhat,
Completely perfect Buddha Shakyamuni.
I make offerings and go for refuge.
Please grant your blessings.

I always prostrate at the feet of Noble Ananda.
I make offerings and go for refuge.
Please grant your blessings.

I always prostrate to Noble Manjushri
And the other male and female bodhisattvas.
I make offerings and go for refuge.
Please grant your blessings.

I prostrate to Noble Mahaprajapati and her entire retinue of arhats,
To Noble Ananda and the hosts of buddhas and bodhisattvas,
I make offerings and go for refuge.
Please grant your blessings.

Interwoven with the words of praise and supplication to the founders of the women’s order, the practice also provides some narrative explaining the story:

The mother Prajapati said this to the Bhagavan for the sake of all
women in the future: “Venerable Bhagavan, in the future please allow
those who have faith and long for the Buddhadharma to enter the teachings.”

The Bhagavan spoke, “Excellent. I allow any woman who protects and upholds the Dharma and practices discipline, generosity, learning, and virtuous qualities to go forth. Or if she remains at home, to receive the
Three Refuges and five precepts, to bring discipline to perfection,
and to enter liberation as well as the branches of enlightenment. If she practices earnestly, she will achieve the three results and transcend the sorrows of gods and humans.”

Due to Ananda, women can enter the Buddha’s teachings.
Gautami, in the future, bhikshunis and laywomen
should always think of Ananda with their whole hearts.
They should respect him, serve him, call him by name, and
continually be grateful to him.

The narrative continues: “Then Gautami said this to the bhikshunis and women, ‘We should ask Ananda for refuge and devote our lives to him.’”

It is for this reason, the thangka depicting Avalokiteshvara and Ananda was displayed so prominently on the stage. It is said Avalokiteshvara himself emanated in the form of Ananda. Due to the intense faith of Mahaprajapati Gautami, the great kindness of Ananda and the Buddha, we have the women’s monastic order today. Over the course of the 2,500 years since the Buddha’s passing, the importance of these acts and the potential of women was forgotten and nuns’ roles were diminished. The Karmapa composed this practice for nuns, so that with the recitation of these words, the lives and stories of the female arhats could continue to inspire others. The sadhana closed with the following words of aspiration:

May all and every woman in the world’s physical and mental
harms and sufferings be pacified,
And may they gain independence and complete powers and abilities.
May all women who go forth, perfect the aggregate of discipline
that pleases the Noble Ones, and perfect
their teaching and study of the three baskets of scriptures and
their meditation practice of the three trainings.

With these noble aspirations, this final practice of the Third Arya Kshema Winter Dharma Gathering came to conclusion. In the evening the Karmapa presided over an animated debate in which the nuns demonstrated a new self-assurance. After a report of the accounting, everyone who helped to make this third gathering a great success was thanked. The shrine hall was filled with joy, coming from a renewed hope and faith of women and nuns, encouraged by the Karmapa to have confidence in themselves, knowing that they can bring the teachings of the Buddhadharma into fruition. http://kagyuoffice.org/renewing-hope-for-many-the-gyalwang-karmapa-concludes-the-third-arya-kshema-winter-dharma-gathering/