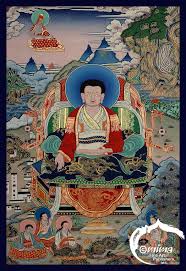 “The nature of mind, free from base and root,

Is that which is, innately, spontaneously present:

I, the unpredictable wandering priest of Śākya,

Have a constitution, the Absolute Body of my own mind, which is at ease;

Rejoicing at having long associated

With the transcendent View, Conduct, and Meditation.

And so it is that, although there is no addendum the end of this text, here I shall write one at this point, following the example of the others.

This note was written by the Karmapa of the Snowy Mountains (gangs-ri karma-pa).

(Translated from the Tibetan by Erick Tsiknopoulos, March 2016.

“wandering priest of Śākya” (shaa+kya’s ban-ldom): ‘priest of Śākya’ is a synonym for someone in the Buddhist clergy; ban usually refers to a Buddhist monk, and probably comes from bhante, a Pāli/Sanskrit form of polite address to monks still current in Sri Lanka. But since Marpa was not a celibate monk, the meaning must be more like ‘priest’ or maybe ‘mendicant’; presumably the term was sometimes used in Marpa’s time for both celibate and lay Buddhist clergy, including married translator-lamas like Marpa; either that, or he is being extremely ironic. Śākya was the family ethnic tribe of the Buddha Gautama, and therefore he is referred to as Śākyamuni, the Sage of the Śākyas (the Śākya tribe still flourishes in Nepal to this day).
http://buddha-nature.com/2016/03/17/marpas-letter-to-draktokpa/