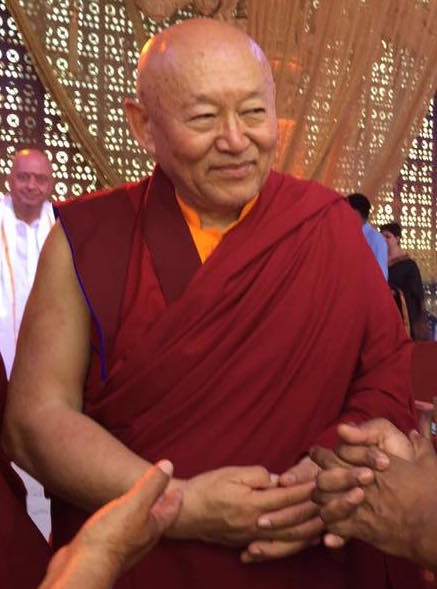 His Holiness The Drikung Kyabgön, Chetsang Rinpoche: The Buddha actually said “I don’t want people developing faith out of respect for me, or because they got a big flash from me. Practice what I teach, and if it works for you, then develop faith in me.”

Today I am giving refuge. We are engaged in the ceremony of taking refuge. We say that we take refuge, or go for refuge to the Buddha, the Dharma, and the Sangha. Those are the Three Objects of Refuge. Let us examine what these Three Objects of Refuge mean. First of all, in English and in Sanskrit, the name ‘Buddha’ seems to indicate or point to a particular person, but in actuality what is meant by ‘Buddha’ is a state of awakening which is composed of two factors. In Tibetan, the word is ‘Sangye’. The first syllable of the word is ‘Sang’, Sang means to have completely purified the mindstream of all the stains and defilements deriving from ignorance, or unknowing, in other words the primitive beliefs about the nature of reality. It is the elimination all faults, or negativity, from the mindstream. The second syllable is ‘gye’, which means to completely awaken and maximize all positive qualities innate to the mind itself. So it is said that essentially our own minds are awakened, they have awakened qualities. Bringing those awakened qualities to the fore is what is meant by ‘gye’. Then, putting the two syllables together is what is meant by the term ‘Buddha’ in the Tibetan teachings. This is something we have in us and can cultivate, because it is the seed of what we are. Now, there are three objects of refuge or three sources of refuge: Buddha, Dharma, and Sangha. Those three are one, but they are not one single manifestation, they are three manifestations. The Buddha can be said to be the guide, or the one who shows the path, he is compared to the pilot of a boat. It is said that we need to traverse the infinite ocean of suffering of cyclic existence and reach the other shore, which is freedom from this suffering. In order to that, we need a pilot, or teacher, someone who knows the way. The teacher is the Buddha. The one who demonstrates the perfect path that leads to the complete cleansing and purification of the mindstream of all its stains and defilements. Bringing to the fore and maximizing all positive qualities. The Dharma is the path the Buddha demonstrates which actually leads to liberation from cyclic existence. Those who help us along the way, guiding us and ‘fine tuning’ our path, are the Sangha. These are the three manifestations, the three jewels of refuge. When taking refuge according to the procedure of the Great Vehicle (Mahayana), one should understand that one is seeking refuge for protection not for oneself alone, and not for any self-interest. Rather one cultivates the mindset that one is going for refuge in order to liberate all sentient beings.

As for the enactment of the taking of refuge, one begins the process by making obeisance (prostrating) in a physical way. The start of prostrations begins by the folding of the hands in a particular way. The hands should be held together, with the thumbs tucked together in an elegant way. This is actually symbolic of a lotus blossom, which one offers to the objects of refuge to receive the benevolence of the sources of refuge. There are many ways this can be explained. In general you fold the hands in prayer gesture, tuck the thumbs together, and begin making prostrations, touching the hands to three places. Those three points, the forehead, throat, and heart chakras, symbolize that you go for refuge with your body, speech, and mind. The next thing act, the actual prostrating, symbolizes and subsumes the performance of refuge. You touch your two hands, two knees, and forehead to the ground. So, there are five points symbolizing the yearning to overcome the five primary poison mindsets of ignorance, attachment, aversion, jealousy, and arrogance. Touching these five points of the body to the ground means that you are going for refuge to overcome the virulent effects of those five poisons.

(At this point, the actual ceremony of taking refuge was performed, after which His Holiness resumed His teaching.)

Now, you should all understand that you have just undergone an important experience. You have actually taken refuge. You have gone for refuge. This means that from this day forward you should develop a powerful impetus to practice buddhadharma, to practice the teachings of the Buddha. At least every day, you should make three prostrations and you can pray the short prayer of refuge. If you want to practice more extensively on a daily basis, you can practice preliminary refuge practices that are available in text form. This is a very great occasion. You have invited into your lives something very important and powerful. You should rejoice in that fact. Another reason that the taking of refuge is so special and so important is that it actually constitutes a level of ordination into the practice of Buddhism. There are various levels of what can be called ordination. You can be an ordained layperson where you can take vows to avoid the Ten Non-Virtues and practice the Ten Virtues of body speech and mind. You can be a novice monk or nun. You can be a fully ordained monk or nun. You can be a tantrika. There are many levels of ordination and ordained practice in the world. Taking refuge is the gateway into all of them. In addition, in the secret mantra Vajrayana, the main thing is empowerment and there is no way to attain empowerment without refuge. Therefore, it can be said that refuge is the foundation and the laying of the foundation is extremely important. Therefore, this is an extremely important occasion in which you  participated this morning.

It is said that the fundamental characteristics of the teachings of the Buddha and the practices of Buddhism are the interrelation of all things. The understanding of this interrelationship exists within the essence of Buddhism. Therefore, it is said that the Compassion of the Buddhas is related to the need of living beings. The compassion of the Buddhas is like a hook. When sentient beings take refuge as you have today, it is like you have put a ring that the hook can catch. Therefore, the hook and the ring are interrelated. The taking of refuge is the establishment of the ring in your being that can be hooked by the Compassion of the Buddhas. This is the entrance into all practice. If you wish to practice, you may practice. In any case, by undergoing this particular ceremony you received the blessing of the enlightened being we call Buddha. You have received the transference into your own mindstreams of the positive energy of the enlightened being we call Buddha. As far as the teachings of the Buddha are concerned, they are innumerable. It is said that there are 84,000 categories of the teachings and practices within the totality of buddhadharma. The essence of them all, if one wishes to apply them to oneself is to overcome ignorance, sins, stains, defilements, and negativities of emotions and primitive beliefs about the nature of reality through practice. If we were to boil it all down into a single phrase it would be this: “Do not enact any non-virtue, even the smallest non-virtue avoid, do everything positive; tame and train your own mind”. This is the essence of the teachings of the Buddha. Another way to look at taking refuge is that you enter into a partnership with the Buddha. We can say that there is a necessary relationship involved. It is said that the Buddha, by Himself, cannot liberate sentient beings from the effects of their negative karma. For example, the Buddha cannot wash away your obscurations with His hand. There needs to be a relationship between the way shown, the techniques given by the Buddha, and your own practice. It is like doing work on a computer: there needs to be both hardware and software for the work to be done. It is not something that can be done with the click of a computer key. It is not something that manifests automatically, but rather it is something you have to take an active part. Your own liberation will result from the powerful teachings of the Enlightened Being given to you as well as your own application of effort to these teachings. You need to practice in order to accumulate merit and eliminate the negativity of past karma, thereby opening the way to your own realization of the actual nature of being itself, which is the essence of Dharma. The Buddha has shown the way, now it is up to you to tread that path. As for the teachings of the Buddha, the Speech of the Buddha, you first need to hear the teachings, to take the teachings, to hear the Words of the Buddha. Then you need to think about what you heard, contemplate what you have heard. Investigate what you have heard. Test it, try it out, and see if it works. Then you need to meditate on what you have contemplated. The Buddha never recommended the dependence on instantaneous blind faith. Rather, he recommended investigation, testing, weighing, comparing, and contrasting: really getting into it. Then, because of what you discovered, based on discovering the qualities of the teachings in your lives. Developing faith should be something that is as valued as gold: you test it, scratch it, put it in various chemicals, it passed all the tests and you say: “AH this is really gold!” Then you value it appropriately. The Buddhdharma is like that, all the teachings and practices within Buddhism are like that. You hear them, you think about them, you try them out, and you see how they work for you. When they work for you, you develop faith, a faith that is a reasoned faith. It is not a meaningless leap of faith; rather it is based upon practical direct experience. The Buddha actually said “I don’t want people developing faith out of respect for me, or because they got a big flash from me. Practice what I teach, and if it works for you, then develop faith in me.” Don’t do it just out of respect for the outer trappings, but actually experience the inner essence of the teachings for yourself. That is the solid rationale of faith that the Buddha always recommended.
It is important to understand that you have done something here by going for refuge that has many benefits. These many positive effects will begin to be felt by you in your lives and your mindstreams. In general, it can be said that you have entered the path to liberation. On a relative plane, it said that you have averted many harms that might otherwise have come to you. You will not be harmed or hurt in any way by the negative machinations of humans or non-human obstructers. The many sins, stains, and defilements that you have accumulated from beginningless time until now in your mindstreams have been cleansed and purified through the act of taking refuge alone. Vast stores of merit have been planted in your mindstreams. You have assured yourselves of something that can be of benefit to you, even at the moment of death. These are some of the relative benefits you acquired by taking refuge this morning.

DEDICATION
Dedicated to the impeccable perpetuation of the glorious Kagyu lineage and to the  success of its leaders and followers in accomplishing their commitment to bring all sentient beings to the state of enlightened awareness.