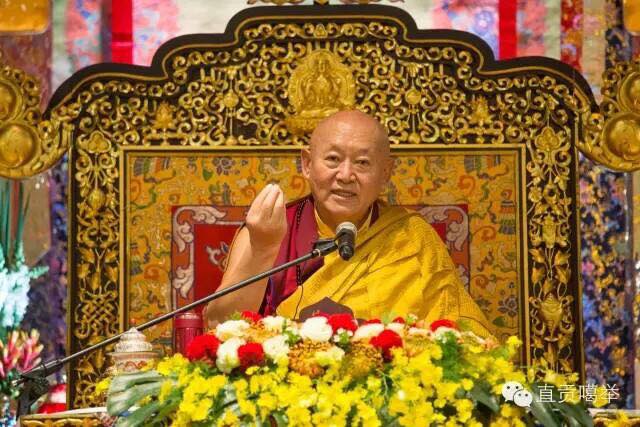 His Holiness The Drikung Kyabgön, Chetsang Rinpoche: This is a non-dual practice of sutra and tantra leading to non-dual realization, and non-dual accumulation of wisdom and merit.

The Oral Commentaries of His Holiness The Drikung Kyabgön, Chetsang Rinpoche: On The Short Sadhana of Amitabha Buddha and The Pureland of Dewachen

We begin on page 2 of the text. The first word is ‘Namo’. ‘ Namo’ means “I bow down to, prostrate to, or make obeisance to”. To whom? To the Three Jewels, the Buddha, the Dharma, and the Sangha. In addition to, or as another mode of manifestation of the Three Jewels, there is what is called ‘The Three Roots’. They are one’s teachers, the lamas; the chosen deities, the Yidams; and the Dakinis who are the forces of inspiration manifesting as enlightened females. All beings who have attained any stature of enlightenment: Buddhas, Bodhisattvas, any of those in whose mind has arisen enlightenment. In all of them, I go for refuge for the sake of establishing all sentient beings in the state of Buddhahood. In this one stanza of four lines, there are two processes, where both refuge and the generation of bodhicitta are contained. The first two lines constitute the refuge. Then the purpose for going for refuge is to place all sentient beings in the state of enlightenment; I will generate the mind of enlightenment. In this one sloka , two things are accomplished: going for refuge and the establishment of bodhicitta. These are the preliminary steps for entering the practice of the sadhana. Three things have been accomplished already. One has been obeisance. The second is the taking of refuge. The third is the generation of bodhicitta. One repeats this stanza three times.
Now one can engage in the main body of the practice. However, to engage in the practice, first, let go of your perception of yourself as an ordinary flesh and blood person, and your environment as being ordinary. Dissolve everything into emptiness. Then, from emptiness itself, arises the remainder of the practice. The dissolution of all ordinary perception into emptiness and rising of all subsequent practice from emptiness is implicit in the first syllable of this line: the syllable ‘AH’. It is said that the syllable AH is the supreme sound. It is the seed of all other letters, syllables, and sounds. AH is the thirtieth letter of the Tibetan alphabet, making it the culmination of the meaning, the sound, the intention, and the vibrational frequencies of all the other letters. It is the implicit underlying, deep meaning of, and the culmination of all the other letters and all the other sounds. In the text of the “Manjushri Namsanghati”, it is said that it is the supreme among all letters because it is natural. It is spontaneously self-arisen. It is not produced or contrived in any way. For example, it is the first sound made by a baby. Therefore, it is said to be unborn. As unborn, it is the symbol of emptiness itself. “AH” signifies Mahasunyata . It is called the king of all letters. Just as the letter AH pervades all the other letters of the alphabet, so emptiness pervades all other phenomena. It is the underlying substratum of reality. The letter AH personifies emptiness. First, you dissolve everything into emptiness, which means to abandon your view of yourself, companions, and your environment as being ordinary. When you practice the developing stage of deity yoga, according to tantric procedure, you need to let go of ordinary, demeaning, limited perception, and cultivate pure view. Not seeing you and others as flesh and blood (ordinary beings), but rather as Chenrezig. Not seeing this building, as an ordinary building, rather seeing it as a celestial mansion in the midst of the Pureland of Great Bliss. The Lama is not an ordinary teacher, but is in fact the true manifestation of the Buddha Amitabha. This is called the ‘cultivation of the exalted view of the developing stage’. The next line says, “All phenomena, all experiences are unborn”. They are pervaded by emptiness, just as the letters of the alphabet are pervaded by AH. The next line says, “This is the nature of reality.” The natural condition is great compassion and awareness of emptiness, non-dual. This is not something fabricated by the mind. This not just our idea. This is not something we create by thinking it so. It is the essential nature of reality itself. It is now, has always been, will always be the case that emptiness and compassion are the ultimate nature of reality.

(At this point, His Holiness leads His students in the practice of the sadhana up until the recitation of the mantra.)

When you begin to recite the mantra, you should visualize light rays boundlessly emanating from the commitment being in front of you. First, offer the light to the enlightened beings of the ten directions, then the light comes back to emanate once more to touch and purify all sentient beings. You recite the mantra for as long as you have time, of for a set number of repetitions.

As the practice winds down, you visualize that light rays emanating from the commitment being. The light rays dissolve all external environment into the three main figures of the commitment being. Then, Chenrezig and Vajrapani dissolve into Amitabha Buddha. From Amitabha’s four places, the crown, throat, heart, and navel chakras, light rays  emanate and strike you in the four corresponding places. This cleanses and purifies you from all obscurations of body, speech, and mind. The light rays transfer to you the four empowerments. The Amitabha Buddha melts into light and dissolves into you through the point between the eyebrows. At this point, you enter the inseparability of emptiness and appearance. You allow the mind to rest in its own natural sphere, the state of Mahamudra.

What has gone on up to now has to do with the developing stage practice of the deity yoga of Amitabha Buddha. Everything that is concerned with the developing stage practice has a particular point of reference. It has an object of meditation, a support of meditation. When Amitabha Buddha dissolves into light and merges with you, you enter what is called the Completion Stage practice of the Deity Yoga of Amitabha Buddha. In this stage, there is no fixed frame of reference. This is a state beyond thought. A state transcends the conceptual mind. The purpose of the practice of the Developing Stage of Deity Yoga is to overcome one’s view of oneself and one’s surroundings as ordinary. It is to make divine your view of existence itself. It is to overcome your attachment to an ordinary, demeaning view. The purpose of the completion stage practice is to overcome your view of your self and your environment as divine. Therefore, having attained the beatific vision, you go beyond the beatific vision by giving up your attachment to this divine view. It is said that the developing stage practice perfects the accumulation of merit, and the completion stage practice perfects the accumulation of wisdom. Both practices, taken together (in fact, they are an inseparable unity), yield Buddhahood. This practice combines, in a quintessential way, the main practices of sutra and tantra. This is a non-dual practice of sutra and tantra leading to non-dual realization, and non-dual accumulation of wisdom and merit.

DEDICATION
Dedicated to the impeccable perpetuation of the glorious Kagyu lineage and to the
success of its leaders and followers in accomplishing their commitment to
bring all sentient beings to the state of enlightened awareness.