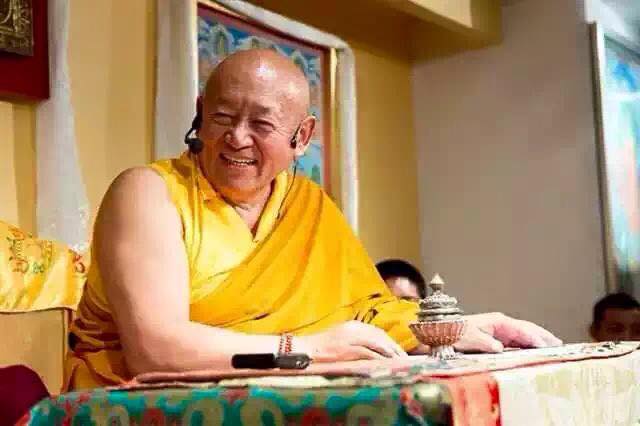 His Holiness The Drikung Kyabgön, Chetsang Rinpoche: These are some of the relative benefits you acquired.

The Oral Commentaries of His Holiness The Drikung Kyabgön, Chetsang Rinpoche.

The teachings continue in the evening.

I am now going to teach the practice (sadhana) of Dorje Purba stage by stage. The first part of the Sadhana of Vajrakilaya is taking refuge. You take refuge in the Enlightened Beings of the Three Times. You take refuge in all the Buddhas, Bodhisattvas, Lamas, and enlightened beings currently in this world with unwavering intent. Imagine here, that your own lama is Vajrakilaya subsuming all the Buddhas of the Three Times. You should understand that your teacher is the enlightened form of Vajrakilaya in this world. The second part of the sadhana is the generation of bodhicitta. In general, this is true of all sadhanas. Taking refuge and generating bodhicitta go together as a unified, synchronistic pattern of energy counteracting the energy of ignorance, or primitive beliefs concerning the nature of reality. The third part is the establishment of boundaries, we say here “All those inimical, countervailing spiritual forces who would militate against the accomplishment of our practice, we cut you off! We lay down the boundary here you cannot come in!” What does this mean?  It means our own thoughts, our own negative mindsets, which are not an actual part of the nature of reality. We cut them off. We lay them aside. We draw a line in the sand. With outer, inner, and secret offerings we make boundaries with body speech and mind which cannot be violated. Let go of, completely dissolve your view of yourself and your surroundings as ordinary. Dissolve into the sphere of great emptiness. From emptiness arises the letter ‘Hung’. From the letter ‘Hung’ arises a lotus and sun disk seat radiating light. Its essence is empty. Its nature is cognitively charged and luminously aware. Its wisdom energy is all-pervasive. It manifests in an unimpeded manner. The entire outer universe arises from it and the entire inner universe, namely the sentient beings resident in the outer universe, arise from it as well. The four great elements of earth, air, fire, and water all come from it. It manifests as a boundless celestial mansion. The boundless celestial mansion is square. It has four corners. It is boundless, yet it has four corners. In the center, arises the letter ‘Eh’ above it. From the instantaneous transformation of the letter ‘Eh’ arises a wheel with ten spokes, representing the ten directions . From the wheel arise a lotus and sun seat. On top of the lotus and sun seat there appears the upstanding letter ‘Hung’; from the instantaneous transformation of which arises Vajrakilaya. One visualizes, then, the true presence of Vajrakilaya in the following manner: He appears having three faces and six hands. On the crown of his head is the tiara, which encompasses the Buddhas of the Five Families. He represents the full manifestation of the four bodies of enlightenment (dharmakaya, samboghakaya, nirmanakaya, and svavabhikakaya). He has in his five places the syllables ‘Om’, ‘Tam’, ‘Hung’, ‘Hrih’, and ‘Ah’. He represents the self-awareness and the spontaneous self-arisen presence of all manifestations of enlightened consciousness in and of himself.

At this point in the sadhana, one performs offerings. One offers to Vajrakilaya  water for the mouth, water for the feet, perfume and incense, the light of candles, flowers to delight the senses, food, and sound. Those are the outer offerings; the inner offerings are blood and semen . After the offerings are made, there is a stanza of praise: “I myself am Vajrakilaya. In myself as Vajrakilaya, at the center of my heart, is another Vajrakilaya (standing upright and the size of my thumb), and in the heart center of that Vajrakilaya, standing upright, is a vajra in the navel of which is the letter ‘Hung’”. Around the letter ‘Hung’ are the letters of the mantra. These letters are setup counterclockwise, but rotating clockwise. ‘Om’ is in the front, then ‘Vajra, Kili, Kilaya, Sarwa, Bigana, Bam, Hung, Phat’ as you recite the mantra. As one recites the mantra, light rays emanate out. The tendered offerings to the enlightened beings come back and radiate out again and touch all sentient beings, healing them, bringing them into the teachings of Dharma. Then all the light rays emanate and purify the four elements that constitute constituent being. The light rays go out again and make offerings to all the enlightened beings. Then the light dissolves into oneself as Vajrakilaya. There is nothing other than that. That is the visualization and the mindset to hold while reciting the mantra. You recite the mantra as much as you can. While reciting the mantra the four activities of enlightened consciousness are enacted. That means luring, enriching, magnetizing, and destroying, whatever needs to be done is enacted. Other than that there is no purpose to mantras. His Holiness then leads the practitioners into the practice of the mantra….

From oneself as Vajrakilaya, while reciting the mantra, hold on to the view of yourself as the yidam. In your heart center is the wisdom being Vajrakilaya. From the ‘Hung’ in his heart center light rays radiate out and penetrate the ten directions of space. Then make offerings to all the enlightened beings, and heal and purify the stains and defilements of all sentient beings. Eliminate the limitations of all sentient beings. The light rays then return in to you. All that is conceived as ‘outer world’ dissolves into the central figures of the visualization: oneself as Vajrakilaya. Then the whole divine realm of Vajrakilaya dissolves into Vajrakilaya himself. Vajrakilaya dissolves into the being at his heart. The being at dissolves into the letter ‘Hung’. The letter ‘Hung’ dissolves from the bottom up until it enters into the sphere of emptiness where there is no reference point, no ‘inside’, no ‘outside’, no ‘other’, no subject, no object, and you allow the mind to subside into and rest within its own sphere, in that realization of non-dual awareness and emptiness. As long as you are able, you allow the mind to reside within its own natural sphere. Then, thoughts, specifiable appearances and experiences begin to arise again. You let them arise as the letter ‘Hung’, which instantaneously transforms into the appearance of Vajrakilaya. At his crown center is the white letter ‘Om’, at his throat center is the red letter ‘Ah’, and at his heart center is the blue letter ‘Hung’. Light rays emanate out and penetrate the ten directions of space. You hold to the realization that all form is the manifestation of Vajrakilaya. All sound is the manifestation of the mantra. All thought is the movement of Vajrakilaya’s enlightened consciousness. In that realization, you dedicate the merit, or the positive energy that is accumulated in the practice of the sadhana to the welfare of all sentient beings. That concludes the empowerment and a brief teaching of how to practice the sadhana of Vajrakilaya.

Translated by Michael Lewis. Transcribed by Ngakpa Jeffery Könchog Gyaltsen ©San Francisco Ratna Shri Sangha.
DEDICATION
Dedicated to the impeccable perpetuation of the glorious Kagyu lineage and to the
success of its leaders and followers in accomplishing their commitment to
bring all sentient beings to the state of enlightened awareness.